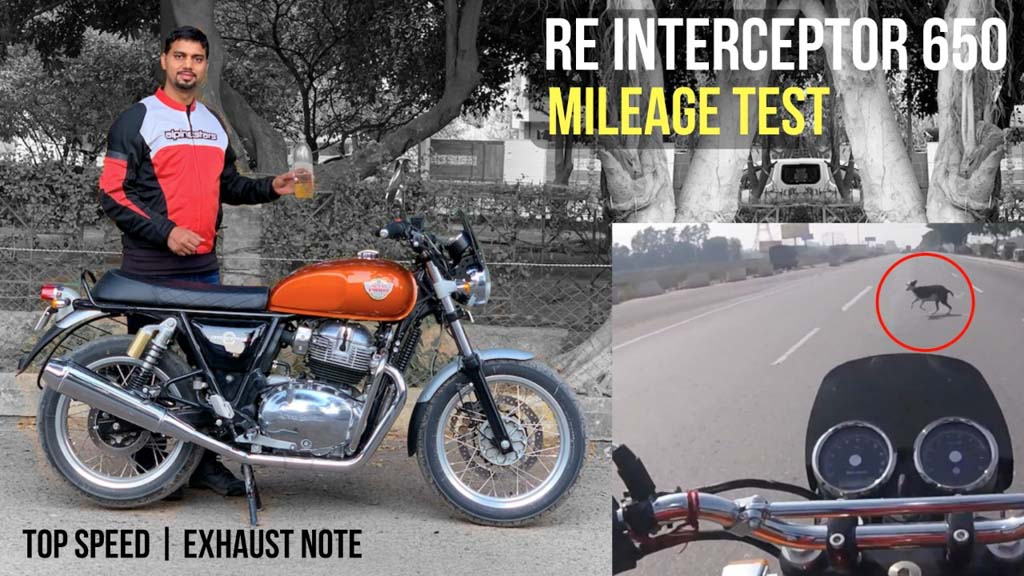 Royal Enfield Interceptor 650 mileage test, top speed and a lot more things you need to know about the motorcycle can be seen in our latest video

Royal Enfield has brought in the 650 cc parallel-twin motorcycles with much promises. Having made everything it could to make them premium offerings, the Chennai-based manufacturer is indeed aiming high volume sales. Impressed by the initial proceedings, we at GaadiWaadi went ahead and bought ourselves an Interceptor 650 and it will help you with a complete ownership experience of the motorcycle.

We will be posting detailed videos with different tests including mileage while assessing what the most affordable twin cylinder motorcycle in India is capable of. You can have your eyes peeled on our YouTube channel for comprehensive and in-depth review of the Interceptor 650 as we munch more miles on the clock.

We did manage to reach a top speed of 165 kmph while the narrow escape of the dog when riding at 135 kmph stands in testament to the committed braking capability of the standard dual channel ABS system. The incident was nothing short of panicking and you could see that drama unfold and a lot more in the attached video.

The Interceptor 650 uses the same powertrain as its Continental GT 650 sibling as the 648 cc parallel twin-cylinder fuel-injected unit is good enough to generate a maximum power output of 47 bhp at 7,100 rpm and 52 Nm at 5,200 rpm. It is connected to a six-speed transmission with slip-assist clutch as standard first for a Royal Enfield.

The dual-channel ABS system is accompanied 320 mm front and 240 mm rear disc brakes. 41 mm telescopic front forks and twin-gas charged rear shocks do the suspension duties on the Interceptor 650. It is more touring capable motorcycle with relaxed handlebar positioning and a bigger fuel tank when compared to the modern cafe racer.