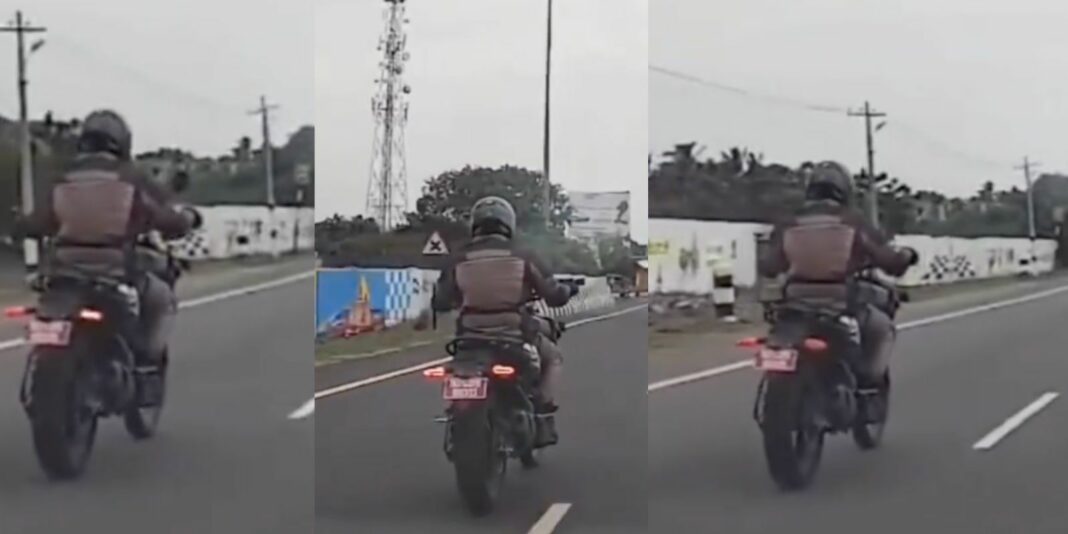 Royal Enfield Himalayan 450 is expected to go on sale sometime next year; will boast a new 450 cc liquid-cooled engine likely capable of around 40 bhp

Royal Enfield introduced the Scram 411 and Hunter 350 in the Indian market this year and it is expected to debut another motorcycle in the later stages of this CY as well. It could unveil one of the multiple 650 cc motorcycles currently being tested at the EICMA show in Milan. At the same event, the brand debuted the special 120th-year anniversary edition of the 650 twins and the SG650 concept last time out.

It is no secret that the homegrown manufacturer has been testing the Himalayan 450 on public roads and the latest sighting shows the test mule cruising on a highway. In a typical adventure tourer way, the Himalayan 450 has a tall stance with the test mule’s rider sitting upright holding the handlebar in a relaxed manner.

The grab rail section, split seats and the side-mounted exhaust system can also be seen along with what appears to be LED turn indicators and hazard function. Expect it to have a bigger fuel tank compared to the existing Himalayan 411 and the front will likely ride on a 21-inch wheel and the rear with a 17-inch wheel with wire-spoked wheels on both ends.

The Royal Enfield Himalayan 450 will be positioned at a premium over the Himalayan 411 and expect it to come with a tall windscreen, circular-shaped LED headlamp and an LED tail lamp, metal braces around the fuel tank, a semi-digital instrument console with a Tripper Navigation system, a dual-channel ABS system with disc brakes at the front and rear, etc.

The upcoming dual-purpose adv will likely have a more hardcore off-roading character compared to the 411 and it has been on test in India as well as the United Kingdom where the original Himalayan was developed. From previous spy shots, we can say that the rear monoshock suspension is slightly more inclined forwards and upside-down front forks will also be available.

Judging by the Himalayan 450’s test prototypes in their near-production state, we can expect the motorcycle to make its global debut sometime next year before going on sale in India as well as abroad. It will directly take on KTM 390 Adventure and BMW G310 GS.