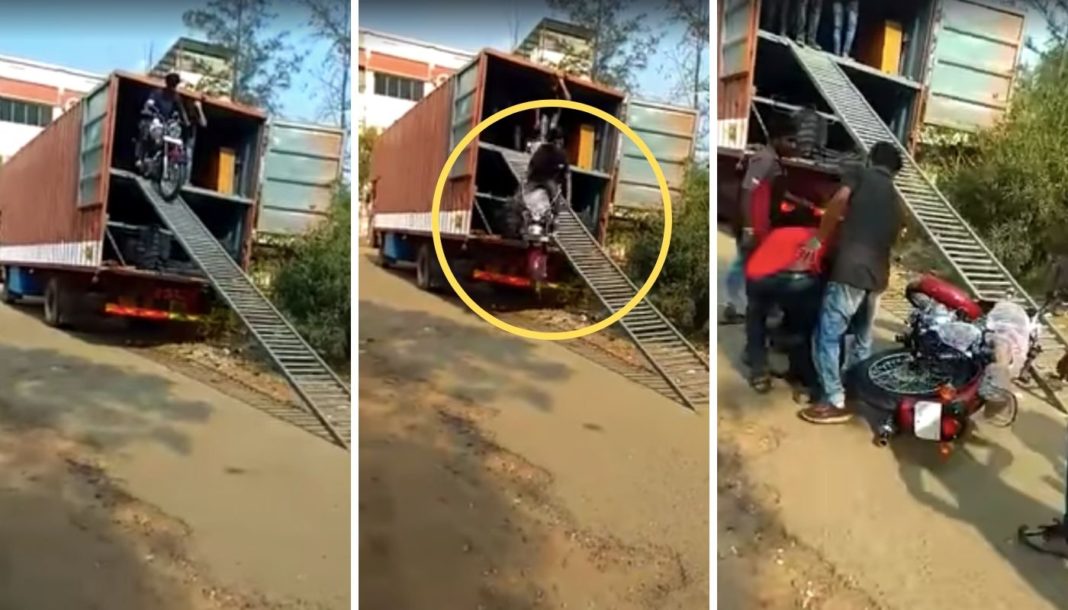 It’s is very common to come across videos of some freak accident that shows a mishap taking place happening at some of the most unsuspected places. However, the latest video that we have come across is something that goes on to display the carelessness with which vehicles are often handled before their delivery.

The vehicle in question here is a Royal Enfield model that is being shown being taken off a trailer. It’s common for motorcycles to be transported in trailers and then unloaded at the dealership stockyards. Similarly, the Royal Enfield motorcycle was being unloaded by what seems to be someone from the stockyard.

All seemed well until this point as it looked like a pretty normal video of a motorcycle being unloaded from a trailer. However, much to the horror of the onlookers, the guy riding the motorcycle off the ramp suddenly loses control and the next moment, the motorcycle falls off the truck. What’s even worse is that the motorcycle seems to have fallen on the rider before bouncing off him.

Soon after the incident, the onlookers rush to the victim to check on him. While the victim is made to stand on his feet, the video doesn’t go on to show if he’s badly hurt. Whatever the case, it’s clear that the guy was in a very sticky situation. Also, anybody can err during this task but what’s important to point out here is that the danger could have reduced had the guy was wearing a helmet.

Like we said, anyone can make a mistake while unloading a motorcycle off the trailer on a narrow ramp. However, using some basic safety practices like wearing a helmet is something that can be easily done to ensure the safety of the rider who unloads the bike off the truck. Also, we hope that the motorcycle that has been damaged in this incident is not sold off to an unsuspecting buyer.