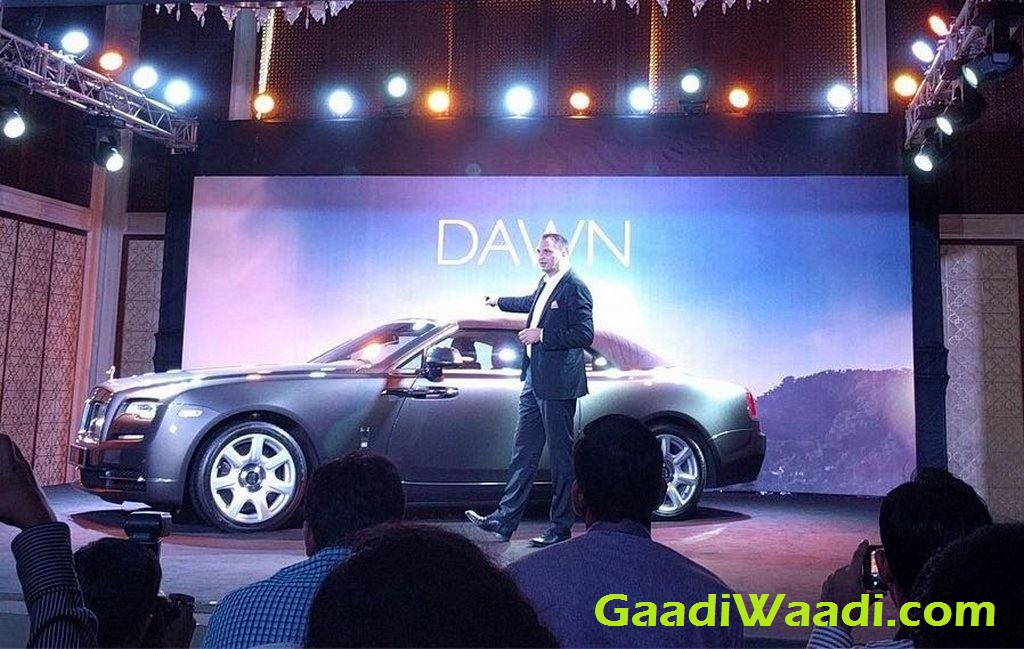 Rolls-Royce has launched the Dawn luxury convertible for the Indian market today and it carries an ex-showroom Mumbai price tag of Rs. 6.25 crore. Despite the soft-top convertible model sharing underpinnings with the Wraith coupe, the British manufacturer has taken an entirely different approach in creating this unique 2+2 seater.

The retractable soft top can be opened or closed at speeds of up to 50 kmph in just 20 seconds and is the first vehicle in the Rolls-Royce car lineage to be offered only as a drop top. The fourth RR model to grace Indian customers, besides the Ghost, Wraith and Phantom, has more than 80 per cent of the bodywork completely new. It follows the Phantom Drop Head as the second convertible from Rolls-Royce to be offered in India and as it is based on the Wraith platform, the styling is very similar. The Dawn soft-top is the successor to the original Silver Dawn – only 28 units were made – arrived in 1952. Rivalling against the Bentley Continental GT, the new Dawn debuted at the 2015 Frankfurt Motor Show.

The Rolls-Royce Dawn measures about 5,285 mm in length, 1,947 mm in width, 1,502 mm in height and features a wheelbase of 3,112 mm. Up front, the prominent chrome grille sits higher than what can be seen on the Wraith. The headlamps are slim with smart Daytime Running Lights surrounding the projector head lights. The other imposing elements are large air intakes, big bumper, central air dam and most importantly the restyled bonnet carrying the Spirit of Ecstasy. Power source for the Rolls-Royce Dawn is the same 6.6-litre twin turbocharged V12 petrol engine found in the Wraith.

It is capable of generating a maximum power output of 563 bhp and 820 Nm of peak torque. The motor comes connected with an eight-speed automatic transmission that helps the car to achieve an electronically limited top speed of 250 kmph while the standstill to 100 kmph is claimed at just five seconds.

On the inside, the Dawn convertible features four-zone automatic climate control system, premium audio system with 16 speakers, 10.25-inch touch-screen HD navigation display, Multimedia navigation system and Spirit of Ecstasy rotary controller with gesture sensitive touchpad and wood and leather detailing with the cabin christened as ‘Sailent Ballet’ for its quietness.