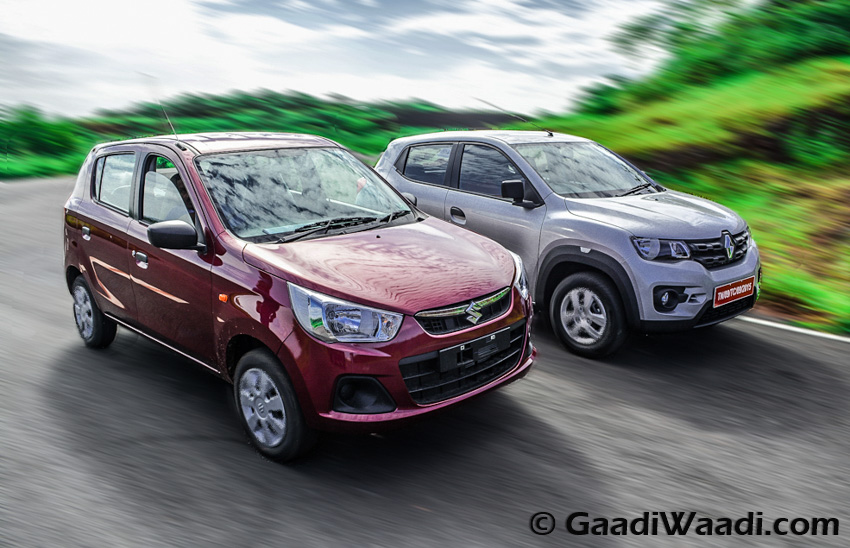 Renault Kwid vs Maruti Alto K10 – A comparison which is the talk of the town, how does this new small car fare against a car which iconic name plate on it

One must wonder or rather take a deep breath and gain confidence, before you plan on taking a rival who not only knows the consumers of the country better, but also provides cars with low-cost and reliability, the Maruti Suzuki Alto K10.

Yes, the all new Renault Kwid is ready to penetrate likes of consumers look forward for cars from the mini car segment. One must wonder or rather take a deep breath and gain confidence, before you plan on taking a rival who not only knows the consumers of the country better, but also provides cars with low-cost and reliability, the Maruti Suzuki Alto K10. 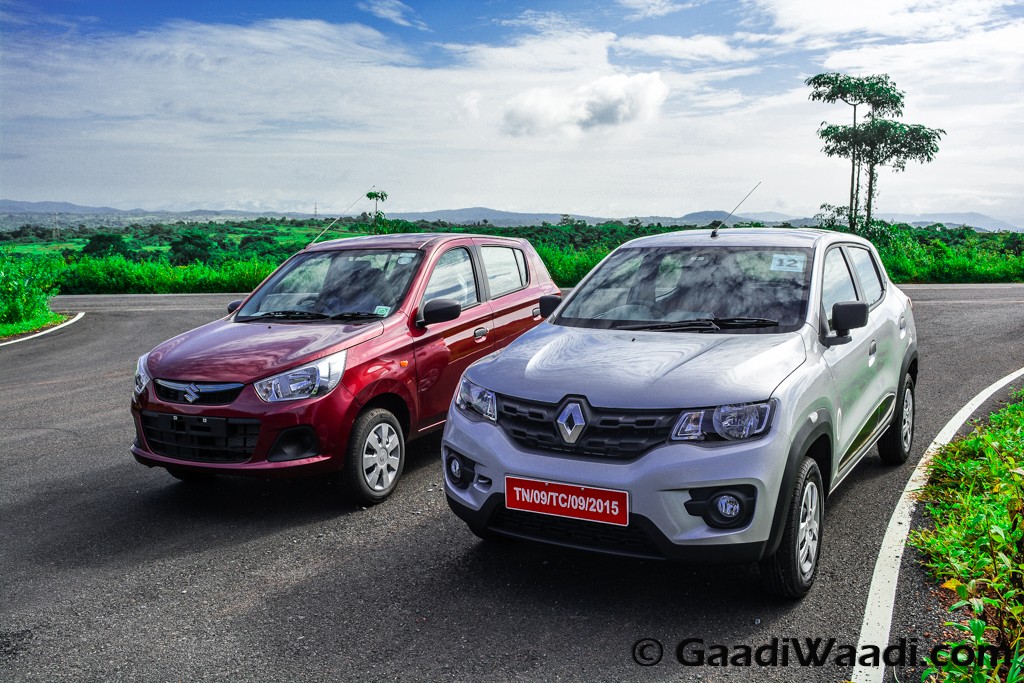 Yes, the all new Renault Kwid is ready to penetrate likes of consumers look forward for cars from the mini car segment. So, what makes the Kwid distinct from the Alto K10? We show you what exclusivity has Renault grew into its breed while its preparation of storming Maruti Suzuki, India’s most selling small car producer.

Let’s talk a bit about both the entry-level city cars, the Renault Kwid and Maruti Alto K10, before entering into the detailed specs of the cars. 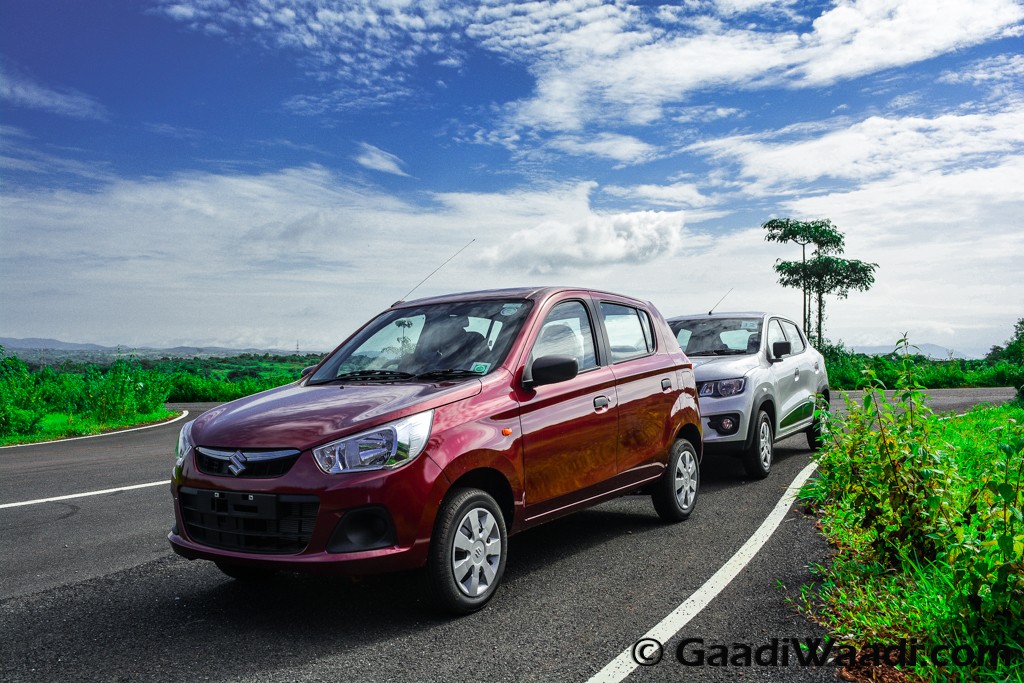 Renault Kwid is the latest entry-level crossover/city car offer in the Indian market by the French car manufacturer. Unveiled in May 2015 at the Renault plant at Chennai, is based on the new CMF-A platform jointly developed by Renault and Nissan.

The Renault Kwid bypasses the Alto K10 in its segment by just one thing to reach the finale, is its multimedia touchscreen to keep you entertained. Alto K10, talking about the best-selling city car, we all know it better! Maruti Suzuki’s this version of the Alto K10 sports a bold but yet mild look with a bit of common man’s perspective into the car, makes it the most popular in India.

Both the Renault Kwid and Maruti Suzuki Alto K10 have one of the strongest features you expect from a car manufacturer. Though the design and specs change, we look at the quality of the product provided internally and the touch quality of both. 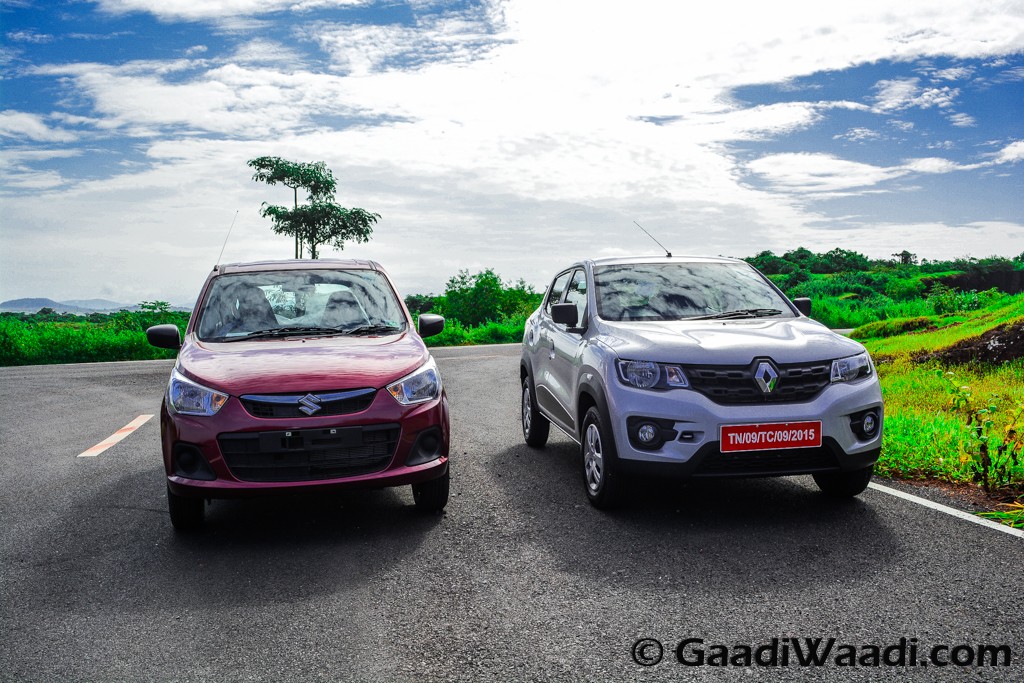 The case is pretty simple here. Alto is a quintessential small car as it sticks to the ground and its design to be a tall car at the same time.

However, the Kwid here is a small with stilts as the design is small and tall boy, but has been raised by a huge margin as the ground clearance is 180mm. 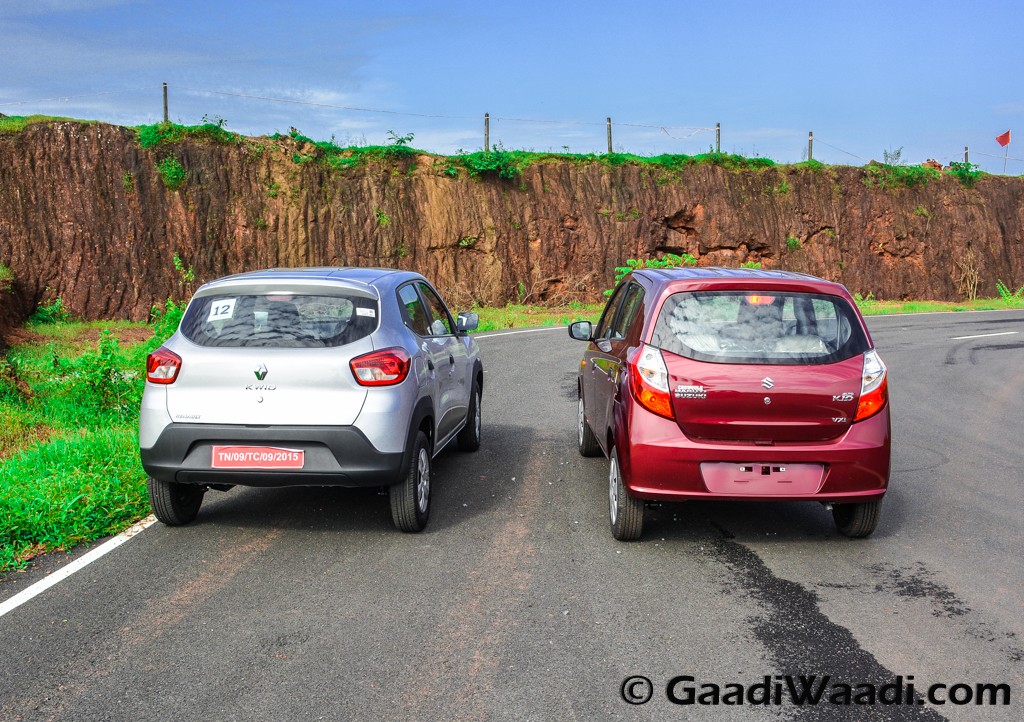 The French quirky design is better than Maruti’s conservative design. We thought Alto K10 is sportier than the Alto 800, Kwid just goes two notches above in that department with oval headlamps and quirky rear profile along with a bold looking side profile along with cladding and vinyls in black color. 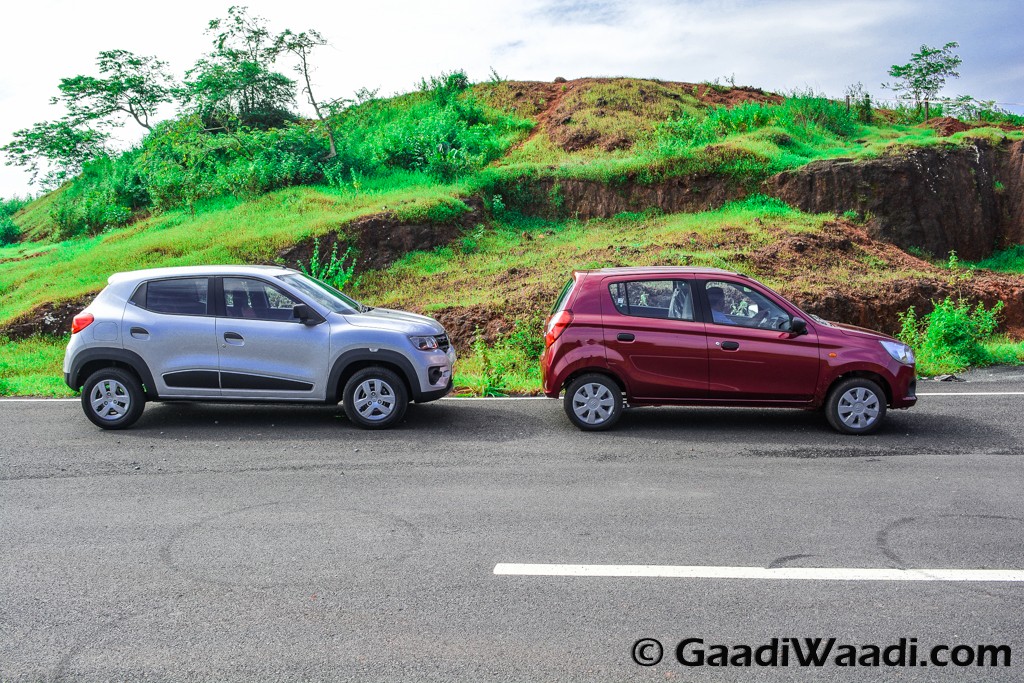 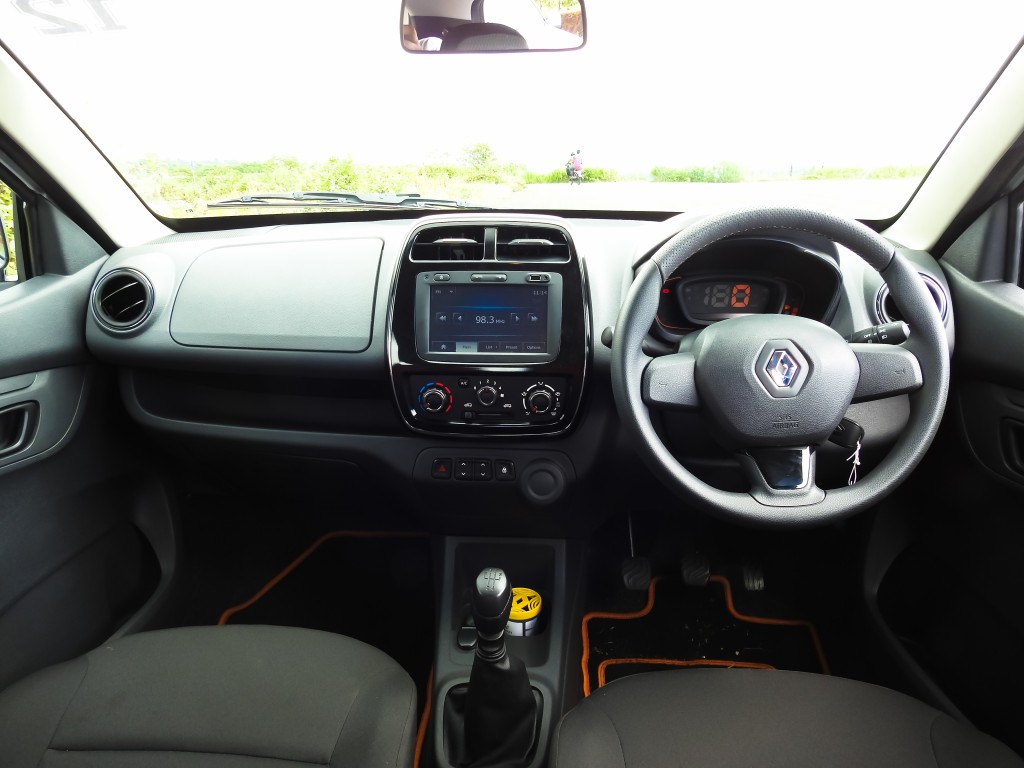 Overall, both cabins are great, but we think the touchscreen is a master stroke by Renault which makes the cabin go way ahead of its time! Space in the back on both cars is limited, but Kwid has more leg room, but the bench is flat meanwhile position on the rear seat of the Alto K10 is good but lack of space and comfort makes both cars equal in this test 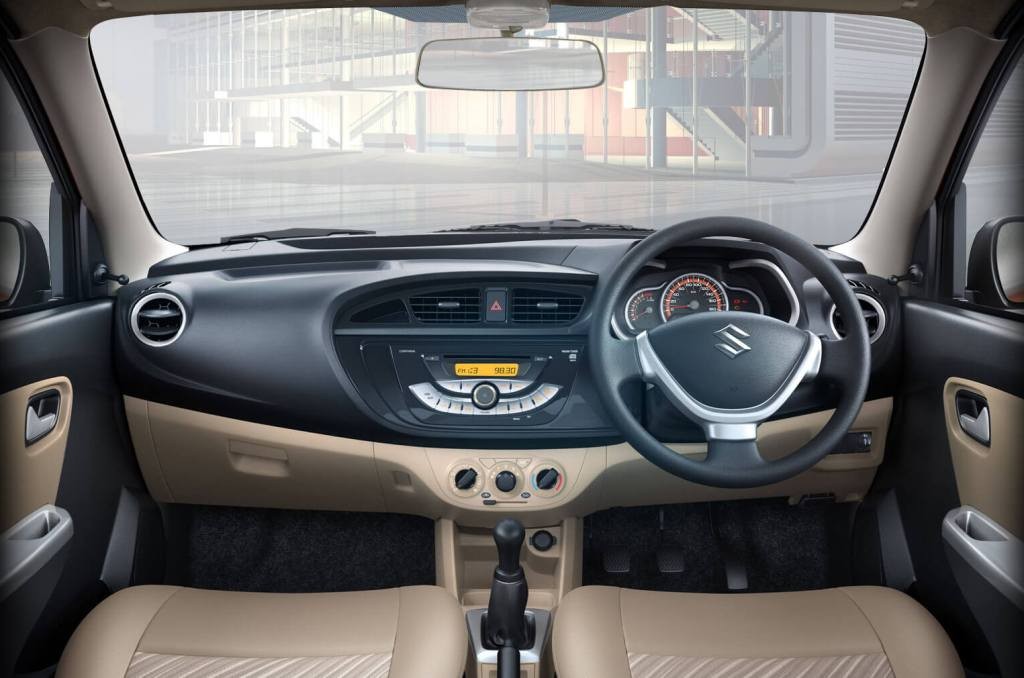 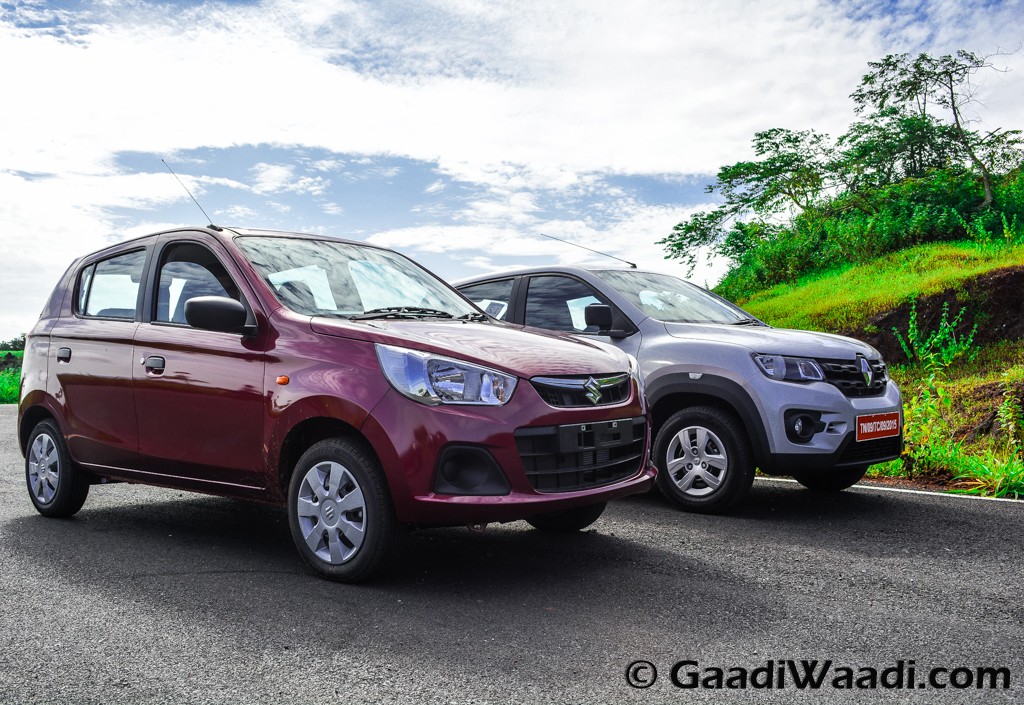 On paper Alto K10 may have the upper hand because it has a bigger engine, more torque and power from the engine, but it’s the Kwid kerb weight which is truly astonishing at just 660 KG! Power to weight ratio is quite similar.

As we all know both have good driveability in town and decent mid-range and both lack top-end, but do have a top speed of around 140 km/hr mark which makes equal when it comes to performance. 25 km/l on the Kwid and Alto K10’s 24 km/l is only due to the kerb weight trick for both cars and something which is very important to the customer in this segment. 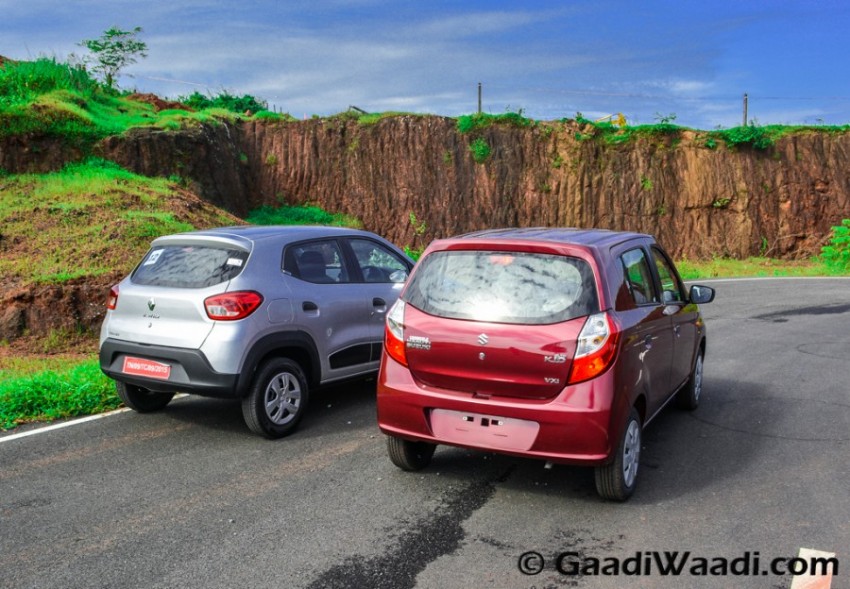 Alto K10 has its traditional strong points such as value for money, Maruti network and proven reliability. However Kwid is also set to offer good sales and service experience which is as good as let’s say Honda or Hyundai in terms of reach at least.

Kwid set to offer even more value, fuel efficiency by a margin and a lot of space as standard. Kwid with fresh design and unique SUV stance along with some unique proposition overall clearly aces the test and is a great buy for the informed buyer.