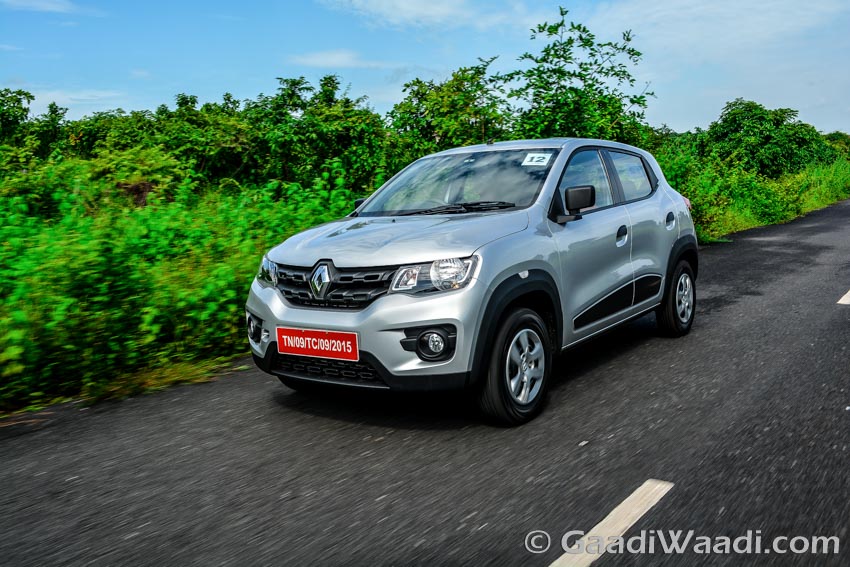 In May 2011, Renault launches Fluence as their first car in India that followed by Pulse and Koles SUV. All 3 cars failed to find buyers. Then, Renault launched the real game changer product ‘Duster’ that totally transformed the image of the Renault brand in India. The response Renault Duster received isn’t less than the dream for any car manufacturer.

However, Renault is planning big with a 5% car market share into consideration, and for that, they have to launch a product similar to what M800 was for Maruti in 1983 and Santro in 1998 for Hyundai. But before entering the entry-level car segment in India, Renault created the brand value with the Duster among Indians.

Renault showcased Kwid’s concept at Auto Expo 2014 and unveiled the production version earlier this year in India. Kwid is based on all new CMF-A platform, i.e. made in India, but will use in foreign markets also. Its body equipment evaluated in Korea, durability tested in France and overall assembly, body, chassis and final testing carried in India.

Renault India is aiming to dent the monopoly of Maruti Suzuki in the entry-level segment, but it isn’t as easy as it is currently looking, Kwid will have to pass many obstacles before that. In this entry-level segment, the main requirement of the first time buyer is low maintenance cost, good fuel economy, long durability and good drivability.

As per Mr. Sumit Sawhney (CEO & MD Renault India), we had done our homework very well, considering all these factors.

So, how does the Renault Kwid performs on roads and is it a right product to invest your money? Let’s find out in our detailed review as we drove it on nearly all kinds of road conditions

Despite the fact that it is 98% localized Indian car, but its styling is of international standard as it also to set to be exported to many countries. Back in 2009, its first sketch made in Mumbai and as per Renault India, its production version isn’t much different from that. Renault Kwid comes with SUV inspired styling, moreover, it looks like a mini version of Duster and its grille is quite similar to Lodgy Stepway. The bold honey comb grille and big Renault logo in the middle is the center of attraction for this car.

At the side profile, Kwid comes with Duster inspired bold wheel arch claddings adding an SUV taste to it. Black door handles, big door moldings  with blackened B-pillar and some good work on crease lines helps it to look spectacular from side as well.

The rear profile of Kwid is as much attractive as of front with bigger and bolder K W I D badge, attractive tail lamps, crease line running towards either tail lamps and SUV inspired dual tone rear bumper. Kwid also comes with sporty rear spoiler. So overall, Renault Kwid is none other than an SUV on styling part, but the fact is that, it is an entry-level car for Indian market.

Step inside to this entry-level car and you will surprised by the fit and finish of the dashboard with Piano finish chrome surrounded center console with horizontal lines on it and triple tone seat fabrics in Black, gray and in red color make its cabin more cool. Renault Kwid comes with 100% digital instrument cluster. Kwid also comes with a chunky steering wheel that provides good grip, it also have 3 glove box and a similar number of cup holders, but all in front only. Front seats are comfortable, with good visibility and glass are all around.

The only area where Kwid shown itself as mini hatchback is rear seating comfort and space. Kwid comes with smallest rear door and hence window. Rear legroom and headroom is not so great for a tall person like me (am 6” tall), seat height is also low and so is the rear headrest makes it uncomfortable seating position.

However, nearly all cars in the segment have very similar seating comfort at the rear and Renault Kwid is offering much higher then what an entry-level car should offer already. Kwid also comes with biggest parcel tray in the segment and you can use it to put your small luggage and water bottles as there is no cup holder or bottle holder at rear. Overall, Renault Kwid is a good-looking cabin and have ability to attract the buyers from upper segment also.

Kwid comes with lots of segment best features such as touchscreen, SatNav, music system with telephonic Bluetooth, key integrated remote for keyless entry and fully digital instrument cluster. Digital instrument cluster comes with easy to read speed display with an on-board computer that shows average fuel economy, average speed and gear shift indicators. Expect speed, all other data isn’t easy to read due to very small fonts. It is very difficult to focus on those small fonts while driving and same is the case with gear shift indicators.

Kwid also offers the front power window, but its buttons are placed on the center console, likely a cost cutting measure. However, Kwid isn’t offered with rear power window and internally adjustable ORVM’s, none of the car offers both features in the segment, but Kwid will likely to get buyers from upper segment and hence, Renault must provide both features on top of the line or optionally.

Renault Kwid is powered by all new naturally aspired 799cc, 3 cylinder petrol engine that generates 54 PS @ 5678 RPM and delivers the torque of 72 NM @ 4386 RPM. However, As per Renault, Kwid delivers 52-56 NM means 80% of torque output comes just at 1200 RPM make it quicker in the early gears. Also, due to its light weight structure which is 660 KG only which makes power to weight ratio as impressive as 85 PS/Tonne which is quite impressive, and the same you feel while driving, as the engine is responsive and acceleration and performance is mighty impressive. The NVH level is at par with the competition.

We drove the car for a full day and we quite impressed by the power delivery of this 800cc car. Accelerating to overtake from a constant speed of 60-70 Km/h is bit hassle which is very common in this segment. We drove the Kwid up to 143 Km/h and we feel that it required bigger brakes or optional ABS for safety, as the braking of this car isn’t much effective. The clutch and gear shifting is better than rivals. 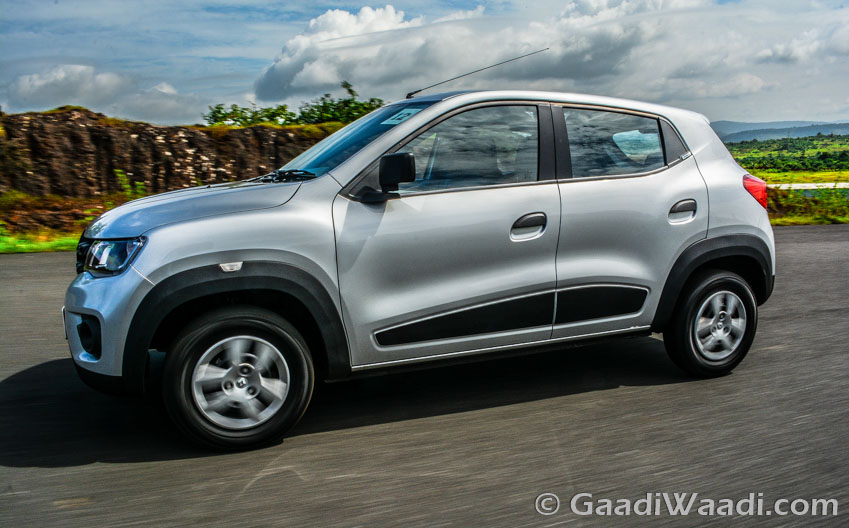 Renault Kwid comes with an Indian most fuel-efficient petrol car tag as it delivers 25.17 Km/l (ARAI Tested), which is the key factor of its future in India.

Renault Kwid is one of the lightest cars in India and despite this fact, its ride quality is impressive. Weighted at just 660KG, the all new CMF-A platform has done its duty very well. We tested the car for a full day, in nearly all possible traffic conditions and all kinds of roads. Kwid steering is very light and we liked it while driving the car in the city or in traffic condition, but it requires some special care while driving on the highway.

We tested Kwid on an off-road and we impressed by its suspension qualities and ground clearance. It passes all obstacles very easily. Ground clearance is the one of the most important factor for rural sales of this car and hence, it comes with whopping 180mm of ground clearance.

On highway speeds changing lanes, Kwid performs very well and doesn’t loose grip. There isn’t much also the body roll in the car around the twisties. Kwid’s turning radius is not so great compared to its main rival as this platform is not only made for small and entry level car, but it can hold a full-blown 7 seater compact SUV on it.

Renault Kwid is truly the one of the best car India is about to get, and it belongs to the entry-level segment. However, it will lure some upper segment customer towards it and that’s why it will require some feature addition in it. Internally adjustable ORVM, rear power window and ABS is required most to serve the upper segment customers. Kwid has enough potential to be sold in 5 digit numbers every month.

Renault Kwid offers more than expected from a first time buyer’s point of view, with the India’s most fuel-efficient petrol car tag, SUV inspired styling, 180mm ground clearance, segment first touch screen media player with SatNav and amazing boot space of over 300 liters. The only concern what a first time buyer will want to know about the after sales service cost and the availability of spare parts and service centers in India. Renault says their showrooms grown by over 600% in last 4 years. Also, service and spare cost will also keep very competitive and even lowered, then what the competition is offering (as per Renault India).

So, Renault Kwid is the right car for you, if you are a first time car buyer or you have a budget of under 5 lakh and looking for stylish and feature-istic car. Prices are not yet disclosed, but it is expected that Kwid will come in 3.10 Lakhs to 3.9 Lakh price range. Later, an AMT version will also join the battle. As of now we are K(W)idding that the best small car in its segment is the Kwid!