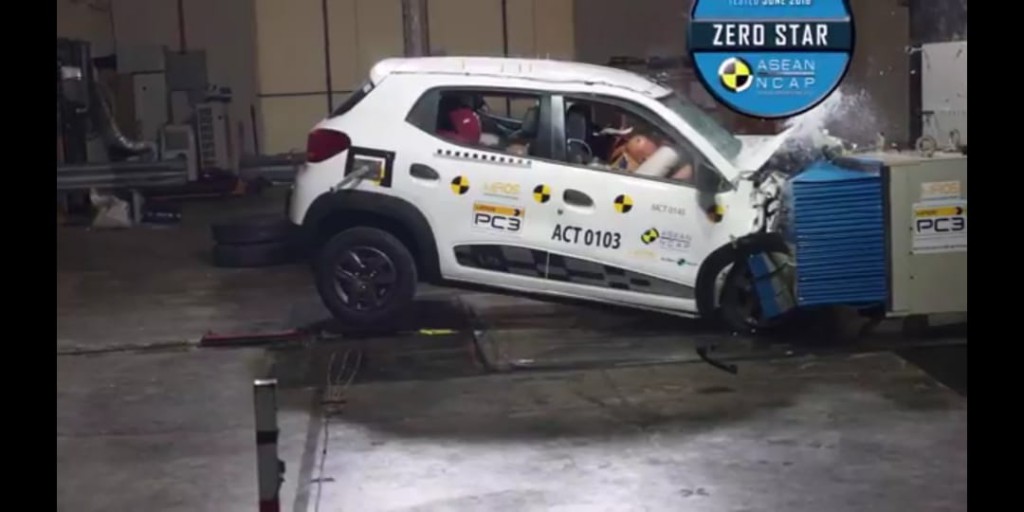 The Kwid scored 10.12 points in AOP category and 14.56 points in COP category. The overall score of Kwid is 24.68 points and ASEAN NCAP rated zero stars

Renault developed Kwid for emerging markets and pricing was key for the success. To achieve VFM pricing, the company had to cut down cost on safety features and body quality. The Kwid was crash tested in 2016 by Global NCAP and awarded zero stars. Then the company made some changes to body, which helped the model to get just 1 star.

New Car Assessment Programme for South East Asian Countries (ASEAN NCAP) recently crash tested Renault Kwid, which was sold in Indonesia and it is made in India. The test results are disappointing as the Kwid scored zero stars again. The model tested has driver side airbag and it is only safety feature available on the hatchback.

ASEAN NCAP Secretary-General, Ir. Dr. Khairil Anwar Abu Kassim is disappointed with the test results of Kwid. The Kwid scored 3 out of 5 stars in Latin America crash test and he said that the company can make safer version, but why they are not making same version for South East Asia. Renault strategy of different regions and double standard is deeply disappointing, he added.

The Latin American spec Kwid is almost 140 kgs heavier than Indian version as the company has given extra structural reinforcements along with use of high strength steel to make body stronger. Renault also offers four airbags, ABS and ISOFIX child seat anchor points are standard on Brazil spec Kwid.

We can expect Renault to improve body quality for Indian version before the new safety norms come into effect next year. In India, Renault Kwid is powered by 800 cc and 1.0 L engine options. These engines come with option of 5 speed manual and AMT (available with 1.0 L only). Renault Kwid competes against Maruti Suzuki Alto K10, Hyundai Eon and Datsun Redi-Go.