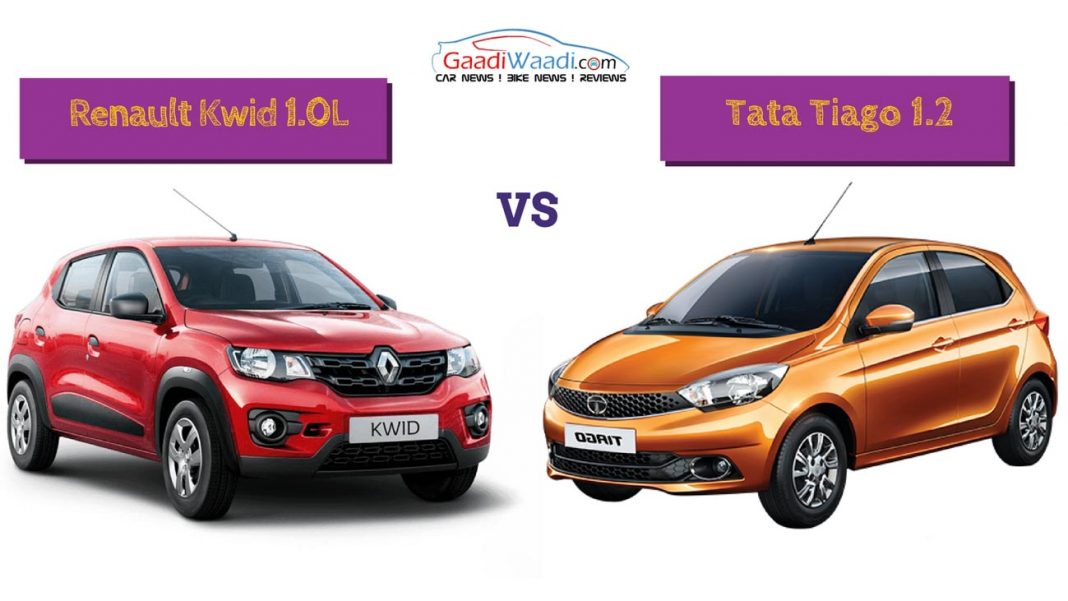 It is a battle between two modern urban hatchbacks

Renault launched Kwid last year, and the car has grabbed everyone’s attention immediately. The car is a hatchback, but it looks like a micro SUV with its tough stance. The Kwid sports a crossover like appearance. In very short span after launch the car has garnered immense popularity. Initially it was launched with a 0.8 litre SCe petrol engine under the hood. But now it gets another engine in form of a 1.0 litre unit. No wonder, the new engine gives it more power.

One more interesting fact about Kwid, is this car gave the French auto manufacturer a strong hold in the highly demanding Indian auto market. Next to the Renault Duster, the Kwid is the second most successful car from the French company. Due to the Duster and Kwid Indian market has become one of the top five markets for the auto major. As the entry level hatchback segment in Indian market is one of the most contested and congested segment, Kwid faces lots of competition from several other cars. Though the car looks rugged and stylish with its contemporary design, but the other automakers too are trying to impress the customers with stylish looking upmarket cars at the same segment.

One such new and contemporarily designed hatchback is the Tata Tiago. Launched earlier this year, Tiago is the latest hatchback from the Indian auto manufacturer. The Tata Tiago (earlier named as Zica) comes sporting new generation design language, which makes it urban and stylish. In very short time the car has garnered quite some interests from the customers. Since launch earlier this year, the car has sold more than 30,000 units in the Indian market alone. Here we will take a look at the spec sheet based comparison between the Renault Kwid 1.0 and the Tata Tiago. In terms of design, the Renault Kwid looks like a small SUV rather than a hatchback. The car sports a high seating stance. It gets a rugged and aggressive looking radiator grille, boxy sharp headlamps, and muscular looking front bumper with nicely placed fog lamps. So far, the entire front fascia gives a powerful vibe, which is carried to the side profile as well.

The side profile of Kwid 1.0 gets sporty looking alloy wheels, side body cladding, blackened glass area. The rear profile also comes a bit muscular. It gets a thick black rear bumper and wrap around taillights. The stop lamp is mounted atop. So far, there is absolutely no exterior change in the Kwid 1.0, compared to the 0.8 litre variant. The Kwid 1.0 was displayed at the 2016 New Delhi Auto Expo. It looked exactly like the 0.8 litre variant. On the other hand the Tata Tiago looks polished and stylish. It has been designed following the Tata Motors’ new IMPACT design language. It comes bearing the similar design language like the Tata Bolt, Tata Zest. The front fascia gets sharp headlamp clusters. The radiator grille gets a piano black finish and smiling pattern with hexagonal mesh. The front bumper looks bold with the wide horizontal slat, chrome trimmed fog lamps.

The side profile of the Tiago gets alloy wheels, sharp character lines, blackened glass area. Move to the rear profile of the car. It features wrap around taillights, roof spoiler with stop lamp. The rear bumper looks a bit muscular. So far, the entire car looks sporty and urban with its contemporary design. The Tata Tiago on the other hand sports a length of 3,746 mm, 1,647 mm of width, 1,535 mm of height, 2,400 mm of wheelbase. The ground clearance of the Tiago stands at 170 mm, which 10 mm shorter than the Kwid. So altogether, the Tata Tiago comes longer, wider, taller than the Renault Kwid. In terms of wheelbase Kwid gets 22 mm of extra wheelbase.

Renault Kwid 1.0 comes with a stylish interior. It gets a three spoke steering wheel sans any control buttons mounted on it. The instrument cluster comes as fully digital and with a layered appearance. The center console comes in a glossy black finish and sporting a touchscreen infotainment system. The touchscreen infotainment system of Kwid was the first such feature in the entry level hatchback segment in Indian automotive market. The Kwid also offers quite some space and comfortable seating positions. It gets sufficient headroom, leg space. If you a tall person, then you might find the knee roof a bit uncomfortable though. 300 litres of boot space means the car comes with enough space for cargo at the back of the cabin. If we have to talk about change, then the Kwid 1.0 comes with some mild colour theme tweak inside the cabin.

The Tata Tiago’s interior looks bit more upmarket and premium compared to the Kwid’s cabin. It comes featuring a three spoke multifunction steering wheel with several control buttons. It gets a dual pod instrument cluster with a TFT display at the centre. The centre console sports a hexagonal shape and come finished in piano black finish. A Harman developed infotainment system is at the center console, which also gets navigation, USB, AUX and Bluetooth connectivity. The dashboard gets body coloured trims around the AC vents. The car offers quite some space for the occupants inside the cabin. Also the upmarket features make it a much desired car within a budget friendly price range.

The Renault Kwid 1.0 draws power from a 1.0 litre all aluminum petrol engine, which churns out 68 bhp of peak power and 91 Nm of peak torque. The engine delivers a fuel economy of 23.01 kmpl. This 1.0 litre engine generates good amount of torque at even low and mid range also.

The outgoing 0.8 litre variant of the Renault Kwid comes powered by a 799 cc SCe petrol engine. This small, efficient and fuel economic engine kicks out 53 bhp of peak power at 5,678 rpm and 72 Nm of peak torque at 4,386 rpm. On the transmission front the Kwid gets a 5 speed manual gearbox. Later an AMT gearbox will also make its way into the car. The Tata Tiago on the other hand takes power from a 1.2 litre three cylinder MPFI Revotron petrol engine. A 5-speed manual gearbox does the transmission duty in the car. This engine churns out 84 bhp of peak power at 6,000 rpm and 114 Nm of peak torque at 3,500 rpm. The engine delivers 23.84 kmpl of fuel economy. The car comes with a multi drive function as well. If we talk about the design, then both the Renault Kwid 1.0 and the Tata Tiago looks beautiful and stylish. The Kwid caters to those, who love SUVs and crossovers, but can only afford a hatchback. On the other hand Tata Tiago is certainly, one car which caters to the urban new age customers. It can be the perfect vehicle for daily mundane city drives as well for the occasional long drives as well.

Talking about the interior and features, both the cars come pretty stylish and feature packed. The Kwid offers a touchscreen infotainment system which is certainly many customers love in their cars while purchasing a new one. On the other hand the Tiago offers multifunction steering wheel, therefore you get to operate several functions from just a slight push of thumb. The cabin space in both these cars are also quite impressive. On the power and performance front the Tiago seems to way ahead of the Kwid. It gets more power, more torque. The multi drive function also gives the care edge over Kwid. And very importantly, the Tiago comes with 23.84 kmpl of fuel economy, compared to the Kwid’s 23.01 kmpl only. On the pricing front too, Kwid gets a tough challenge from the Tiago. So far, Tiago seems much better option compared to the Kwid, if you leave the rugged looks apart.