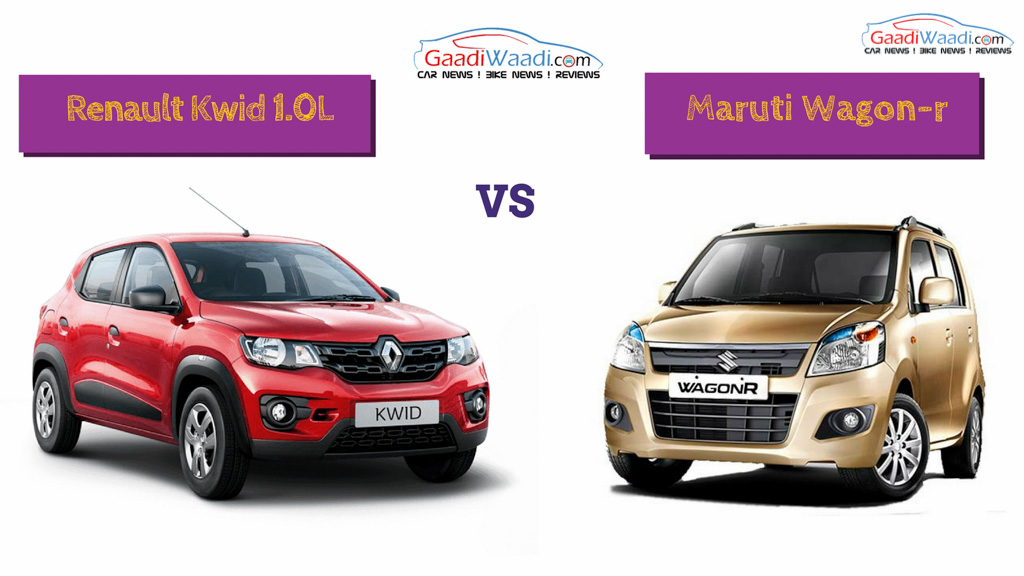 Renault Kwid 1.0 takes on the India’s most popular tallboy hatchback with fresh design and features

French auto manufacturer Renault launched the Kwid hatchback last year. The car grabbed attention and appreciation from the customers immediately after the launch. It really created a whole new niche in the Indian market. The Indians love the rugged and tough design of the SUVs. Economically, they love the affordable small hatchbacks, which are pretty useful in the congested roads of the country due to easy maneuverability.

Renault Kwid provided all of these with some spectacularly stylish features. All of these really helped the car in becoming popular instantly. Though the French auto major launched the Kwid with a 0.8 litre SCe petrol engine initially, the car gets a larger 1.0 litre engine now. This new engine adds zing to the power and performance of the small SUV like hatchback. Being an entrant in the hatchback segment the Kwid has already established itself as the rival of so many cars. One of them is the Maruti Suzuki Wagon R, which itself is a pretty strong model in the segment. The Wagon R has been a strong player in the Indian market for quite long time. The car is one of the most popular models in the country as well. Since 1999 the car has gone through several changes in Indian market.

The tallboy designed hatchback directly takes on the Kwid 1.0. Being a very popular model from the brand India trusts most gives this car an added strength. Here we will see how both the cars take on each other in the battlefield. If we talk about the Renault Kwid 1.0, definitely, the design comes first as the topic to be discussed. It sports a rugged and aggressive stance. The car looks like a small SUV with its rugged appearance. The car sports a bold radiator grille. The headlamps look boxy and sharp, and complement the front grille. The front bumper looks muscular with a large black accented air intake, black accented fog lamps. The hood looks like high seating, therefore clearly delivering a tough vibe. Move to the side profile, the Kwid 1.0 features a crossover like appearance, with all the black side body claddings. The alloy wheels enhance the style, while above the blackened glass area also adds zing. The entire car looks boxy from the side, which again reminds us of a SUV characteristic. The rear profile sports the same muscular tone with wrap around taillights, thick black bumper. Talk about the Maruti Suzuki Wagon R, the first thing noticeable about it the compact stylish design and the taller appearance. In India tallboys were not very much available, but it comes of the few of such designed car, which has garnered immense popularity. The car comes with swept back large and compact headlamps complemented by a large radiator grille. The front grille sports a sleek chrome trim above. The grille gets a black accent. The bumper looks huge while it sports the black accented fog lamps. The front overhang is short and sloping, and sleek character lines are on it. The side profile gets a boxy look with a taller appearance. It features alloy wheels, flared wheel arches, side body cladding. The roof rails enhance the appeal by giving it a sporty look. The rear profile of the Maruti Suzuki Wagon R looks flat. It features set of vertically shaped taillights, a thick chrome handle bar above the registration enclosure. On the other hand, the Maruti Suzuki Wagon R measures 3,599 mm in length, 1,495 mm in width, 1,700 mm in height and a wheelbase of 2,400 mm. The car comes with a 165 mm of ground clearance. So far, the Renault Kwid comes longer, wider compared to the Wagon R. The Maruti Suzuki hatchback comes quite taller compared to Kwid. On the wheelbase front the Kwid comes with 22 mm of extra wheelbase. Kwid offers better ground clearance. The Wagon R gets a 35 litre fuel tank.

Renault Kwid comes with a contemporary and very stylish interior. The cabin offers not only spacious atmosphere for comfortable journey experience. But also the features on offer are pretty attractive compared to its rivals in the same segment. The Kwid gets a three spoke steering wheel sans the control buttons. The instrument cluster comes with an unique design and it is fully digital. The centre console has received a glossy piano black finish and it houses a touchscreen infotainment system. Incidentally, the Kwid’s touchscreen infotainment system is the first such feature in an entry level hatchback in the Indian market. Also the car offers quite spacious cabin. Therefore the occupants get enough headroom and leg space. The 300 litres of boot space offers sufficient space for cargo too.

Maruti Suzuki Wagon R doesn’t get as stylish interior, as the Kwid gets. But the cabin looks spacious and very practically designed, keeping the needs for daily commuting in the city and around. Up front it features a three spoke steering wheel sans any control buttons. The instrument cluster is all analog with two large round dials, while a sleek digital meter is also there. The steering wheel can be tilt adjusted. The centre console on the other hand, sports control knobs and a stereo console. The dual tone dashboard and interior theme looks decent. In terms of space, you cannot actually expect huge room from a budget friendly compact hatchback. But being a tallboy car it offers plenty of headroom. The legroom is sufficient, but tall occupants can feel a bit uncomfortable as their knee might hit the back of the front seats. Interestingly, Maruti Suzuki has cleverly used the space inside the cabin. It offers a front seat undercover tray for small things. The rear seats can be inclined to offer better lumber support. On the transmission front the Renault Kwid gets a 5 speed manual gearbox. Later an AMT version of the car will be launched during festive season. The Renault Kwid 1.0 is claimed to deliver a fuel economy of 23.01 kmpl. So far, the Kwid 1.0 gives more reason to be impressed about the French hatchback.

Maruti Suzuki Wagon R on the other hand takes power from a 1.0 litre all aluminum K10B engine which is BS-IV compliant. This engine is mated to a 5 speed manual gearbox, while there is a AMT on offer as well. The engine kicks out 67 bhp of peak power at 6,200 rpm and 90 Nm of peak torque at 3,000 rpm. The car delivers 20.5 kmpl of fuel economy. Therefore the Kwid is much more fuel efficient compared to the Wagon R. Renault Kwid 1.0 looks much stylish and aggressive compared to Maruti Suzuki Wagon R. The crossover like looks surely helps the car in being popular. On the other hand, the Maruti Suzuki is the most trusted and largest automaker in the Indian auto market. Therefore the Wagon R comes with an added advantage of being a car from that brand. Also this car has established itself as a practical and popular model in last decade.

The Kwid offers plenty of modern features, which surely impress the new age urban customers. Maruti Suzuki Wagon R on the other hand doesn’t actually offer these much features. Compared to the Kwid 1.0 it looks quite Spartan indeed. In terms of space the Wagon R looks a bit more spacious than Kwid though. On the power and performance front both the Renault Kwid 1.0 and the Maruti Suzuki Wagon R comes on par with each other. The Kwid generates 1 bhp extra power and 1 Nm of extra torque. The AMT gearbox provided in the Wagon R gives the car an edge. The fuel economy of Kwid is impressive 23.01 kmpl, which is much better compared to Wagon R’s 20.5 kmpl. On the pricing front too, Renault Kwid is more affordable than the Maruti Suzuki Wagon R with its lower pricing.