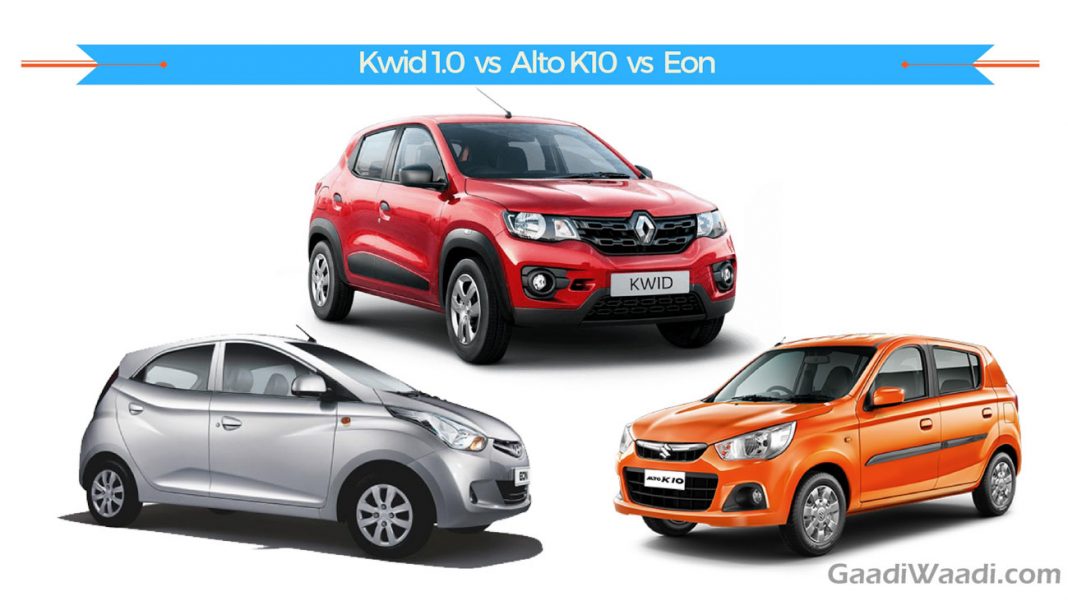 Renault Kwid is one of the most talked about cars of recent times. The car was launched last year and gained popularity instantly. Powered by a 0.8 litre petrol engine the car came with an aggressive stance in the guise of a compact little hatchback but the look of the car is way much different from the regular hatchbacks we see around us. The car sports such a design, which can easily relate to a SUV or crossover.

Now the Kwid receives a 1.0 litre engine. Though the design and features remain same, the power source is updated. Instead of the outgoing 800 cc engine, the new model comes with a 1.0 litre engine generating more power. The Kwid has always been a very fuel economic car and the automaker claims the same for the Kwid 1.0 as well. 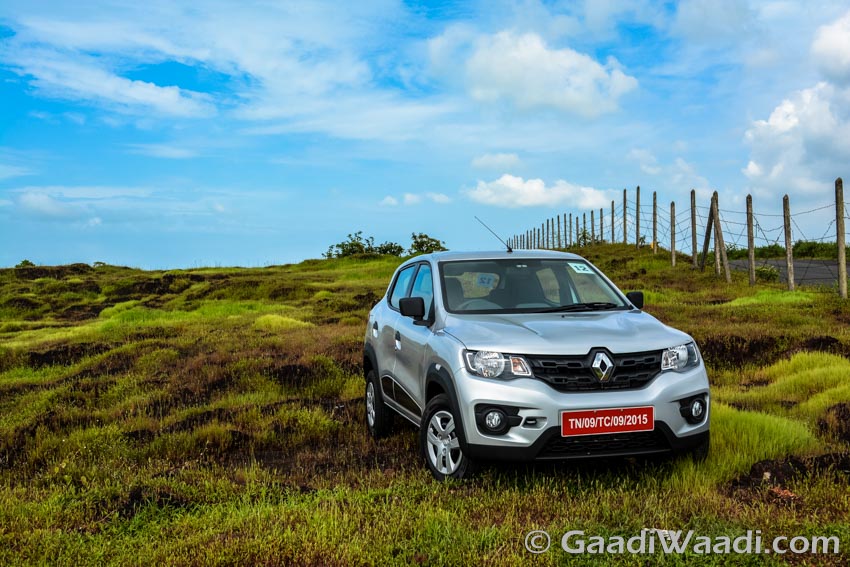 The Kwid 1.0 takes on the Maruti Suzuki Alto K10 and the Hyundai Eon 1.0 in its segment. Both these two models sit on the 1.0 litre segment. Also both the models are pretty popular. Maruti Suzuki being the largest automaker in India has several popular models, and Alto K10 sits at the forefront of them. The Hyundai Eon too is not very far away.

Here we present you a spec sheet based comparison between these three competing vehicles. 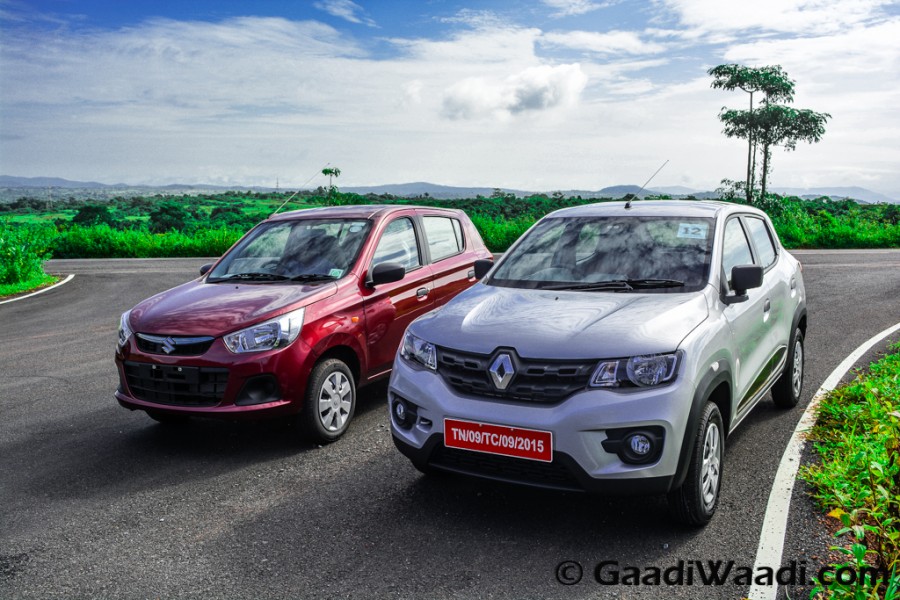 Renault Kwid 1.0 was showcased at the 2016 New Delhi Auto Expo earlier this year. The car bears the same design compared to the outgoing model. The same higher stance bonnet, aggressive front grille, muscular front bumper and black accented fog lamps will continue into the new model also. No wonder, among these three cars, Kwid looks the most aggressive and bolder in terms of styling. 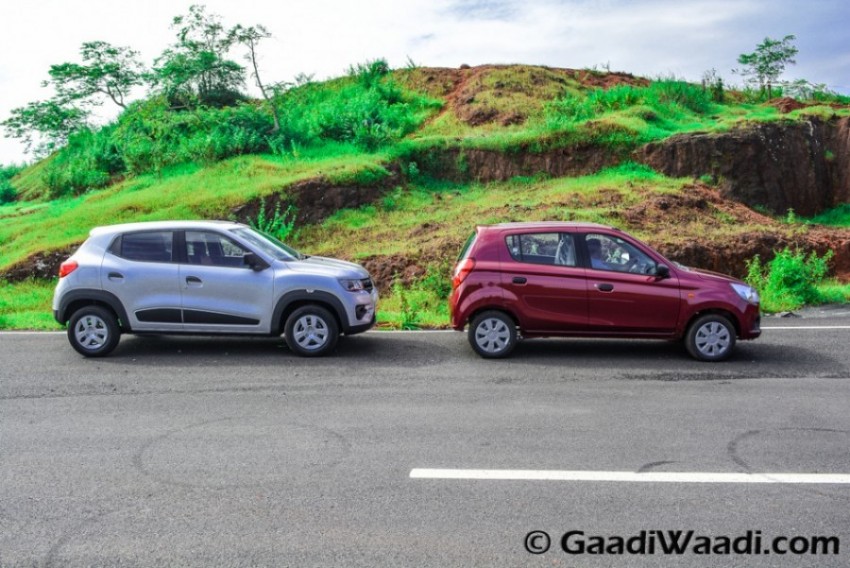 At the side profile the alloy wheels, side body cladding, a bit boxy style and blackened glass area grabs attention. The rear profile gets wrap around taillights plus thick black rear bumper. So far, the SUV like characteristic will be visible in the upcoming model also. So far, the styling of the Kwid is very contemporary compared to the rivals. 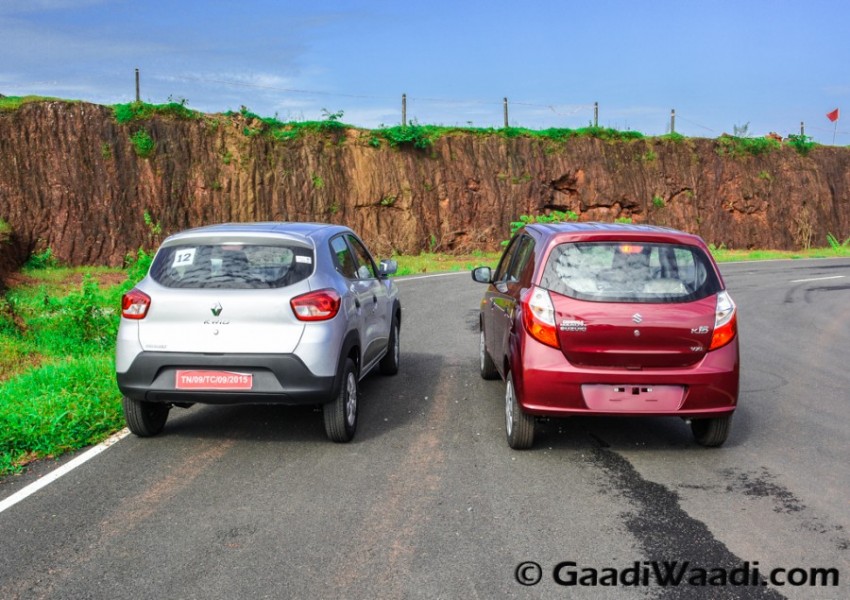 The Maruti Suzuki Alto K10 is one of the most popular budget hatchbacks in India alongside the Alto 800. The K10 comes with more conventional styling compared to the Kwid. It gets a two part front grille with sleek chrome bar above.

The headlamps come large and in wrap around manner. The front bumper looks larger and bolder with the large black accents. The side profile of the car comes bearing alloy wheels, sharp crease running below the blackened glass area. The rear profile features vertically positioned taillights. 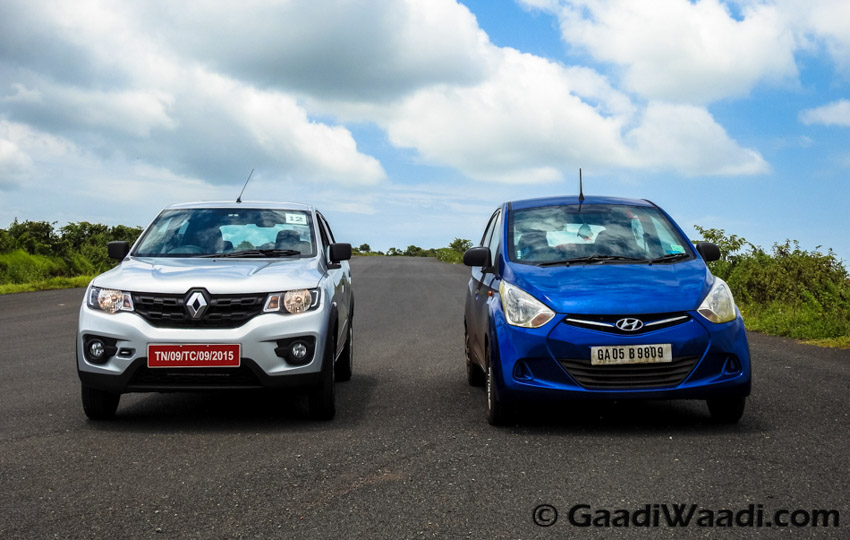 Talking about the Hyundai Eon, the car comes sporting a taller appearance. The front fascia looks quite aggressive with the large swept back headlamps, hexagonal two part front grille. The upper part gets a sleek chrome line positioned horizontally with the logo at the centre. The lower part gets horizontal slats sitting at the large air intake.

Compared to the previous two rivals the Eon sports a nicely sloping hood. The side profile of the Eon gets flared wheel arches, alloy wheels. Move to the rear, the car sports roof spoiler with mounted stop lamp. The taillights are positioned vertically while the rear bumper looks beefy. 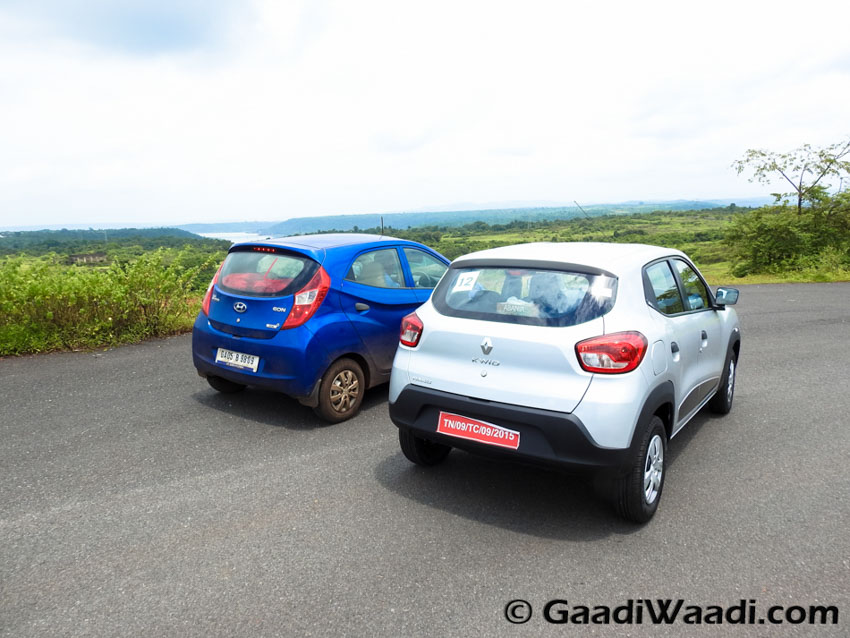 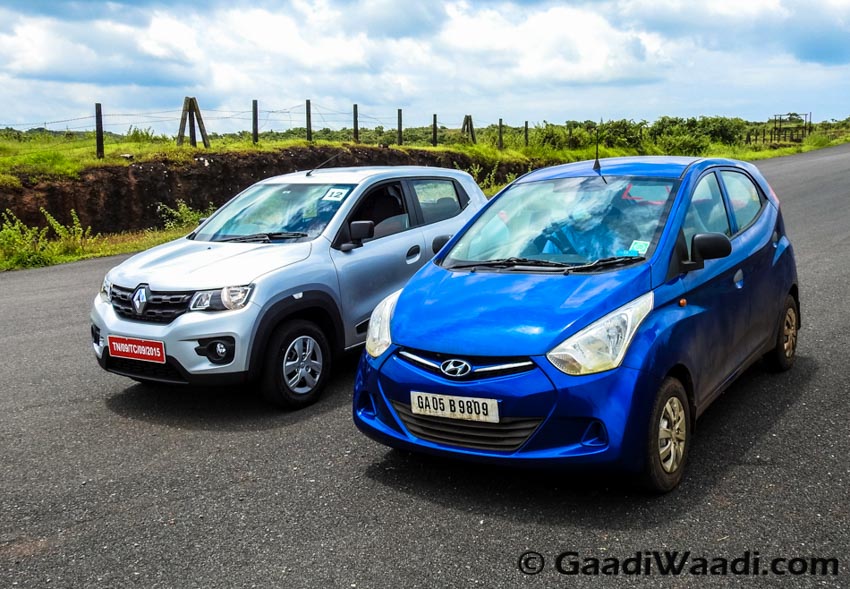 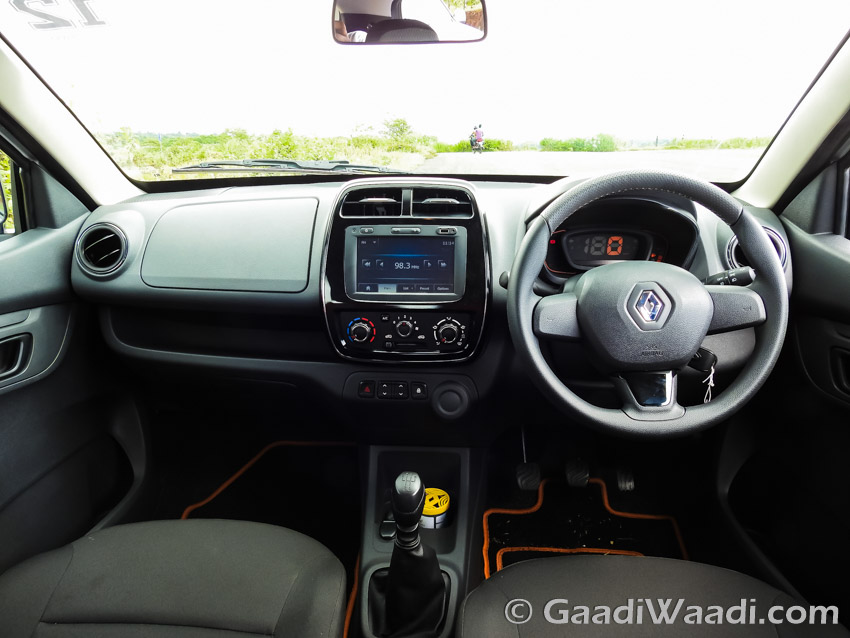 Renault Kwid being the youngest among these three cars comes with most contemporary interior design. The Kwid sports a stylish and urban look inside the cabin. It gets a three spoke steering wheel and a uniquely designed instrument cluster which is fully digital. The center console is certainly very stylish and it sports a glossy black finish. 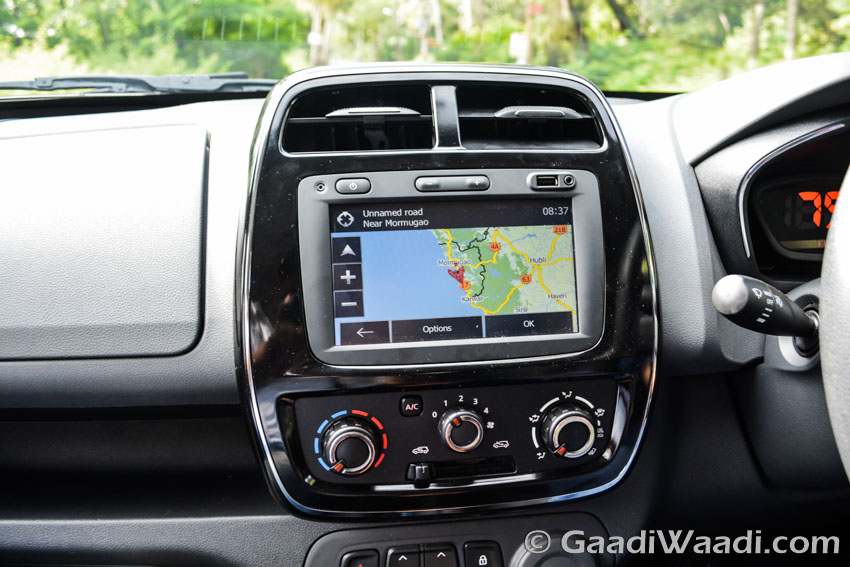 The touchscreen infotainment system at the centre console is the first such feature in an entry level hatchback in the country. In terms of space the Kwid comes with quite spacious and comfortable seating arrangements. The 300 litres of boot space offers plenty of space for the luggage at the back of the car. The only changes in the Kwid 1.0 model is mild tweaks in the colours. 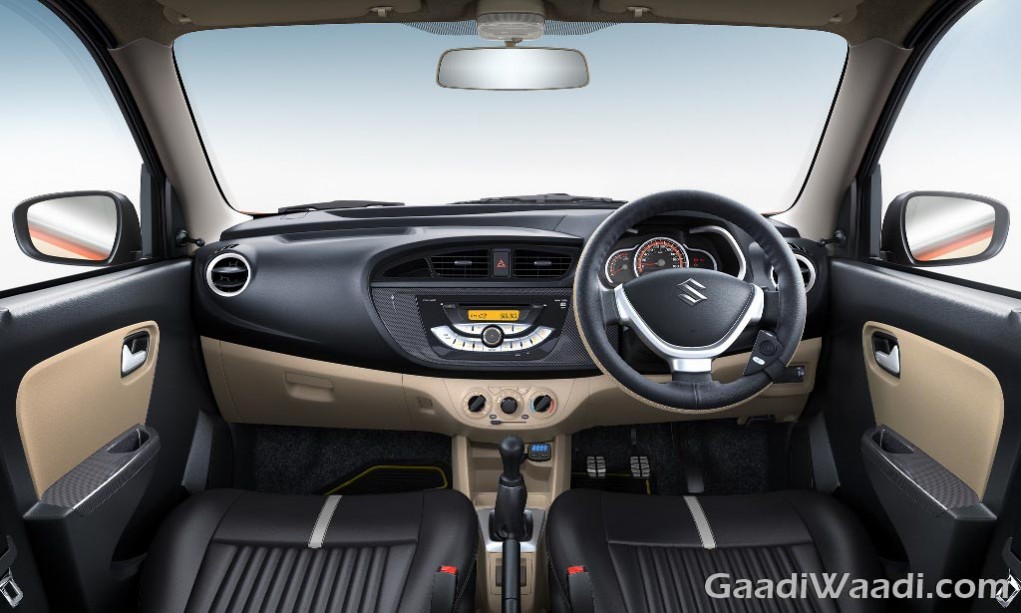 The Maruti Suzuki Alto K10 on the other hand looks Spartan in terms of interior design. The budget hatchback sports a three spoke narrow steering wheel with silver accent. The instrument cluster gets a bit sporty design, but there is no digital display. Instead it gets three round analog dials. The dual tone dashboard gets silver accented round Ac vents, and the centre console offers only a stereo console. The cabin dons a dual tone finish. Alto K10 offers sufficient space for the occupants. 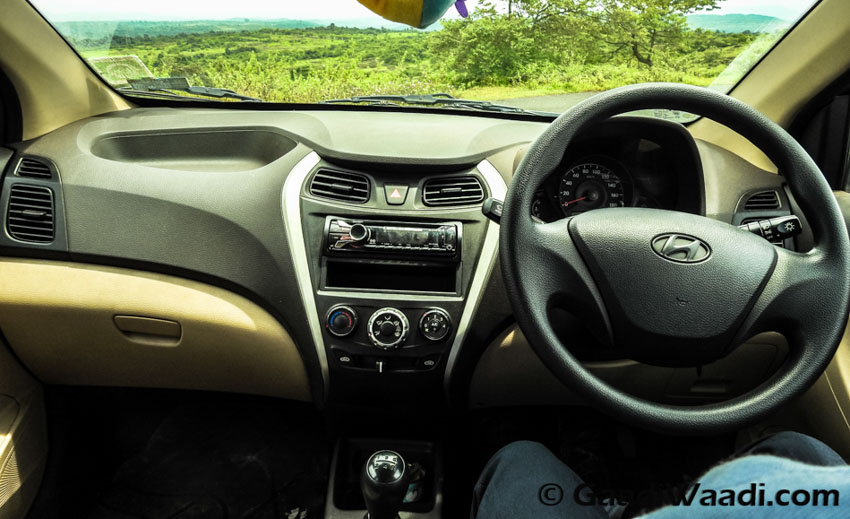 The Hyundai Eon too looks quite dated in terms of interior styling. The steering wheel is all plastic and complemented by the single analog dial at the instrument cluster. The centre console gets a flowing design with silver trims. In terms of features it only gets a stereo console. The entire cabin gets a black and beige dual tone finish along with the dashboard also. Being taller among the three cars, Eon offers best headroom for the occupants. The leg space is not very impressive though. 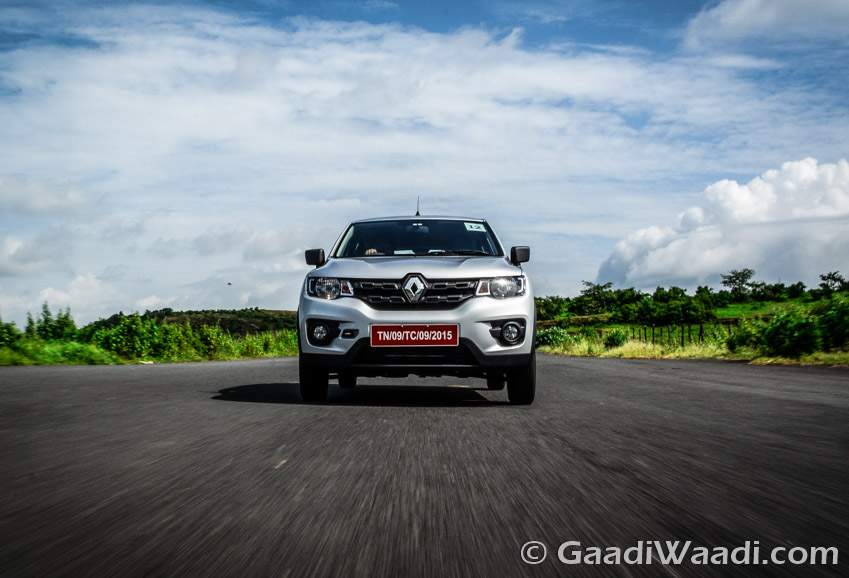 The Kwid 1.0 gets power from a larger 1.0 litre all aluminum petrol engine, which churns out 68 bhp of peak power and 91 Nm of peak torque. It generates good amount of torque at low and mid range. The outgoing model comes powered by a 799 cc SCe petrol engine generating 53 bhp of peak power at 5,678 rpm and 72 Nm of peak torque at 4,386 rpm. On the transmission front it gets a 5 speed manual gearbox. Later an AMT gearbox will make its way into the car. The Renault Kwid 1.0 is claimed to deliver a fuel economy of 23.01 kmpl. 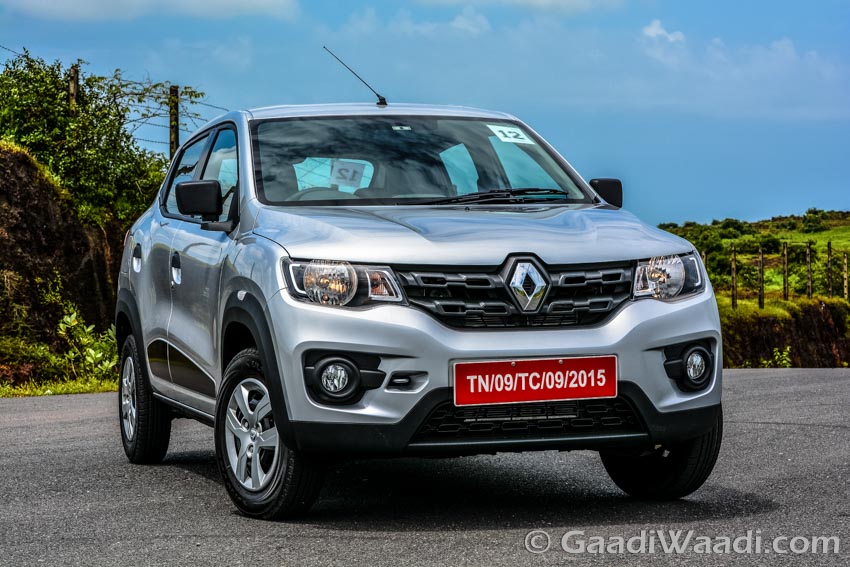 Renault Kwid looks the best among these three competitors. In terms of design, the entry level hatchback from the French auto manufacturer is certainly the best looking car among the fray. It’s aggressive, and the crossover appearance just enhances the appeal.

The interior of the car looks best among the three cars. We are expecting some new colour to make way into the upcoming model. No wonder, it will give the upcoming Kwid’s cabin a more stylish look. In terms of features the Kwid comes with a fully digital instrument cluster while the Maruti Suzuki Alto K10 and the Hyundai Eon, on the other hand, get the dated looking analog consoles.

On the powertrain and performance front, all the three cars come with similar power outputs. The Eon delivers a bit more torque though. Kwid delivers impressive fuel economy (23.01 kmpl) but the Maruti Suzuki Alto K10 delivers best (24 kmpl) among these three models and AMT gearbox gives the car edge over the rivals. On the pricing front, the top of line Kwid’s price looks aptly justified with infotainment music system. One thing for sure, after 800cc segment, Kwid 1.0L will be amongs the best option in 1000cc segment and will rival segment leader Wagon-R, Celerio and Alto K10 along with Eon & Tiago as well.