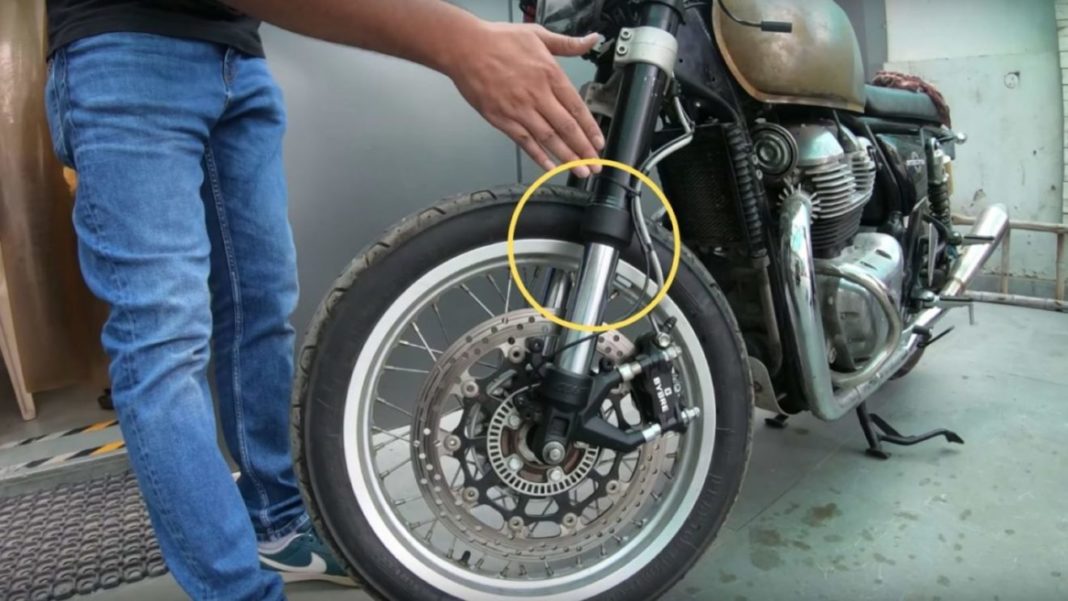 RE Interceptor 650/GT 650 has a tendency to wobble at speeds of 150+ kph and to fix the problem, the owner Mr. Abhinav Bhatt replaced his stock Interceptor 650’s softer front telescopic suspension setup with a stiffer upside down forks taken straight from the KTM Duke 390.

The owner tried to install the BMW G310R’s front end before installing the 43mm USD forks. However, the t-stem on the lower clamp of G310R was too short for the Interceptor’s neck. A lot of subtle changes have to be made to the motorcycle in order to fit a completely different front end to the motorcycle.

However, the suspension is still not exactly fit for the Interceptor because the Duke 390 is way lighter than the Interceptor 650 and the suspension was designed for a much lighter motorcycle. So the owner has to look for progressive springs that could support the weight of the motorcycle and prevent it from diving too much under heavy braking or going over potholes.

Besides installing the new front suspension setup from the Duke 390, the owner also made some other significant changes to the motorcycle as well. As you clearly watch in this video the owner has taken the paint off the fuel tank completely because he wanted to add a retro look to the motorcycle.

It will gain some grain lining and clear coat as well to achieve an old school look. The owner is also planning to fit 17-inch rims at the front and rear so that he could use 120 section tyres at the front and a fatter 160 tyres at the rear. A lot of work is still left on the motorcycle but we will definitely add an update once the project is complete.