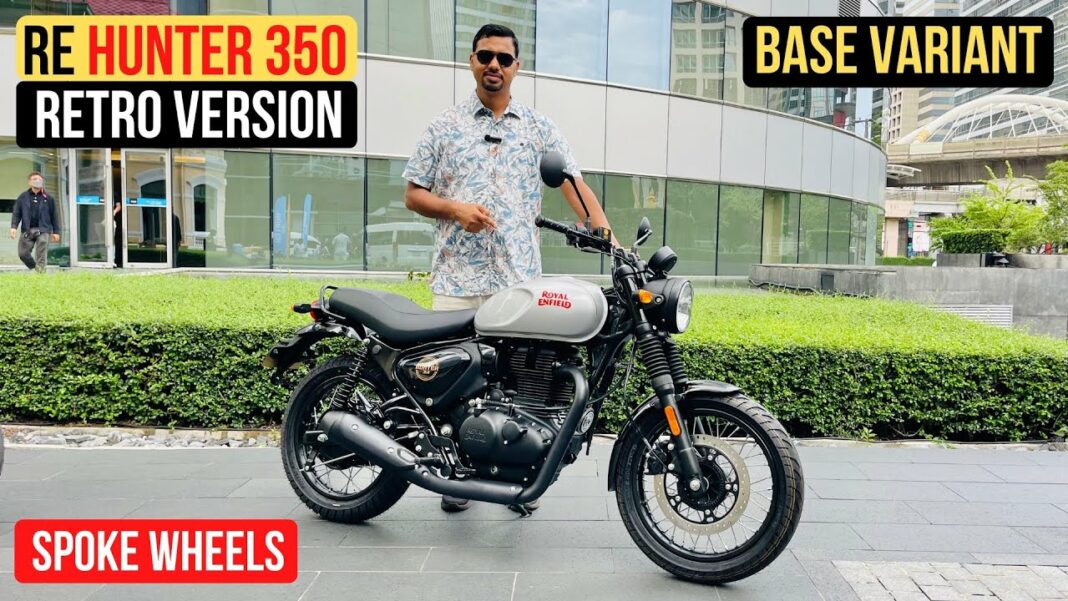 Royal Enfield Hunter 350 will be offered in Retro and Metro variants; based on the same twin cradle frame as the Classic and Meteor

Royal Enfield is planning to host the official launch of the Hunter 350 tomorrow at 4:30 PM IST and it will be offered in two variants namely Retro and Metro. The base Retro variant is expected to become the most affordable 350 cc motorcycle on sale in the Indian market as it could be priced around Rs. 1.5 lakh (ex-showroom).

The Hunter 350 gets a number of changes over the more premium Metro variant and in our first-on-Youtube video linked below, we have explained in detail about all the changes between them. The entry-level Hunter 350 Retro comes with 17-inch front and 17-inch rear wheels like the Metro but it gives a vintage vibe with the presence of wire-spoked wheels while the colour schemes and graphics are also different.

The base Retro also gets a rather plain single-piece seat setup while the halogen turn indicators are oval in shape as opposed to the circular-shaped unit on the Metro variant. In addition, the tail lamp only has a halogen setup as an LED unit is offered in the higher-spec trim. The turn signals continue to be halogens in the Metro but with a different shape.

With no performance differences, both variants are equipped with a 349 cc single-cylinder four-stroke fuel-injected SOHC two-valve engine. The powertrain develops a maximum power output of 20.2 bhp at 6,100 rpm and 27 Nm of peak torque delivered at 4,000 rpm. It is linked with a five-speed transmission.

Another key difference between the Retro and the Metro variants is the presence of a regular tubular grab rail in the former against the split unit in the latter. Other highlights are USB charging port integrated below the switchgear, a basic instrument console and switchgear compared to the Hunter Metro, which boasts a floating semi-digital pod and switchgear similar to the latest Classic and Meteor.