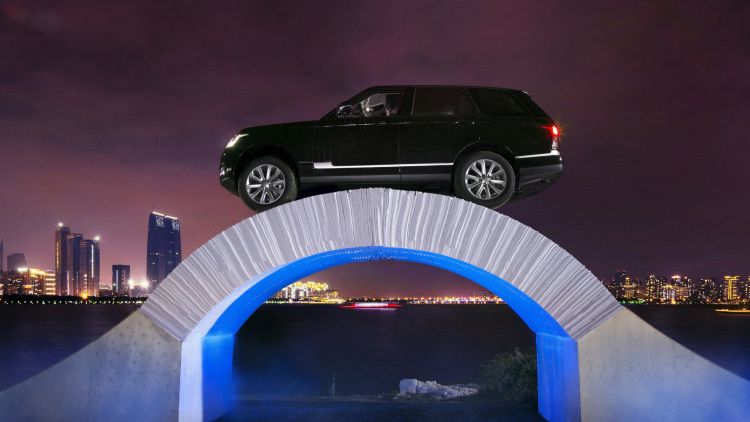 On a freestanding bridge-like structure made of paper sheets that spanned five metres without being glued or held in place, Land Rover drove its Range Rover luxury Vogue SUV to celebrate 45 years of engineering innovation ahead of the Guangzhou Motor Show in China, the country in which the company experienced great sales growth in recent years.

It took three days to construct the paper bridge in the ancient water city of Suzhou nicknamed ‘Venice of the East’ as it’s well-known for historical bridges. The hand-built structure was hewed out of high quality paper supplied and uniquely installed by British manufacturer James Cropper PLC. The one-off art project was created in partnership with renowned British artist Steve Messam. 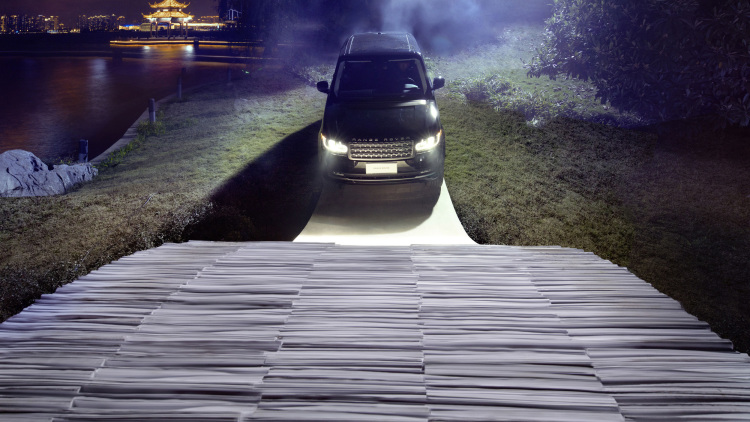 Range Rover has been in the forefront of many technological revolutions over the years. For instance as an industry pioneer, it debuted the first ever luxury SUV back in 1970 and was the first vehicle to drive across the Darien Gap in Central America couple of years later. In 1989, the Land Rover’s flagship SUV was the first 4×4 to be fitted with anti-lock brakes and introduced both Electronic Traction Control and electronic air suspension in the early ‘90s.

Debuting in 2012, the fourth generation Range Rover model was constructed on an all-aluminium lightweight SUV platform that helped save the weight up to 420kg. Land Rover Experience Chief Instructor Chris Zhou was tasked with driving across the paper bridge while the structure was kept intact without deforming using a variety of all-terrain technologies including Terrain Response 2 and All-Terrain Progress Control. 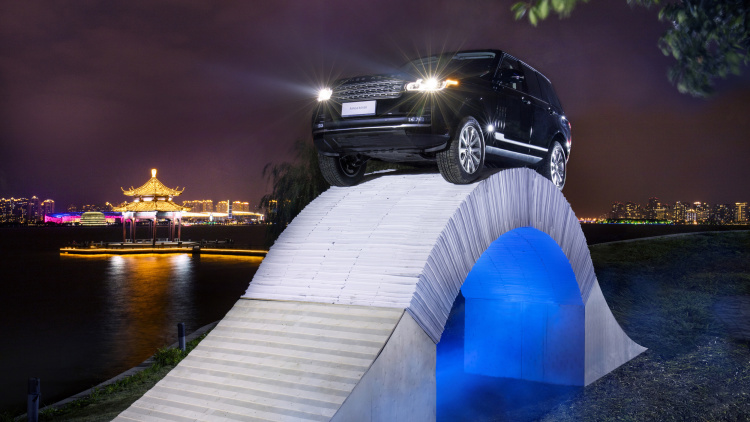 While the former features an auto mode which optimises vehicle settings without any driver input, the All-Terrain Progress Control (ATPC) allows drivers to purely focus on steering by maintaining speed range between 1mph and 19mph without any pedal inputs. Whether it’s deep sands, mud patches, slippery roads, steep elevations or wet grasses these innovative technologies give confidence to the driver by ensuring minimal wheel spin and enough traction.

Chief Instructor Chris Zhou was at the helm of a Range Rover Vogue SCV6 powered by a 3.0-litre V6 engine that produces 340 bhp and 450 Nm of torque to perform the stunt.  It is paired with an eight-speed automatic transmission that featured a standard four-wheel drive system enabling the model to accelerate from 0-100kph in 7.1 seconds before topping out 209kph.

He negotiated the steep slope of the paper bridge with ease before briefly stopping at the top and climbing downwards.

“Paper structures capable of supporting people have been built before but nothing on this scale has ever been attempted. It’s pushing engineering boundaries, just like the Range Rover, and the ease and composure with which the vehicle negotiated the arch was genuinely breathtaking.”