KTM India’s most sought after launch of 2019 is arguably the 390 Adventure. Its popularity was so much that the brand officially announced the Adv’s market entry last year itself around the same time the BMW G310GS went on sale. Moreover, several test prototypes were spied in recent months giving a glimpse of its production identity.

One particular test mule caught in Pune last month appears to be the real deal at least for India, and it looked to be the base road-focussed version with alloy wheels as in the 390 Duke and RC series. It instigated a speculation that the 390 Adventure could be offered in road-biased and off-road spec variants as seen in the dedicated Advs KTM sells in overseas markets.

It could carry the KTM 390 Adventure R moniker for a separate distinction. Both have been rendered courtesy of IAB giving a clear idea od what’s in store ahead of their reported launch in the second half of this year. As in the digital imagination, the major differentiation could be an authentic bash plate for engine protection and standard knuckle guards along with spoked wheels.

The regular as well as 390 Adventure R will likely use 19-inch front and 17-inch rear wheels. The styling approach will be similar and the 390 Adventure will be a descendant of the bigger siblings such as 1290 Super Adventure with bare minimum body panels and a parted headlamp assembly with wide projection LED light. A tall wind blast protector, luggage carrier, LED turn indicators and LED tail lamp, tall upright handlebar and seat prepped for long saddle time. 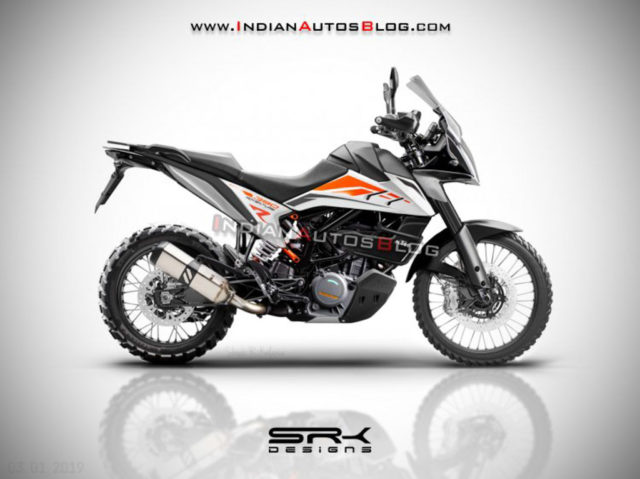 We can expect switchable dual-channel ABS and ride-by-wire throttle to be offered as standard equipment while the long travel suspension system (USD front fork and monoshock rear) will also likely be identical in both the variants – except for a slightly higher fork travel in R perhaps. The 390 Adventure could open up bigger opportunities for KTM in the optional accessories department, as generally customers’ preference for personalising adventure models has wide potential.

Several bits and pieces will be carried forward from the Duke 390 including a coloured TFT instrument screen with provision for navigation and smartphone integration. The performance specs of the 390 Adventure will likely be identical to the Duke 390, as the 373 cc, single-cylinder, liquid-cooled engine should be tuned to produce 43.5 hp and 35 Nm.

The six-speed transmission with slipper clutch could be tuned for closer ratios to offer low range grunt. The KTM 390 Adventure is predicted to cost at Rs. 2.7 lakh while the R version may target a price tag of around Rs. 3 lakh (both prices, ex-showroom). They will go head-to-head against BMW G310R, and ludicrously priced Kawasaki Versys X-300.