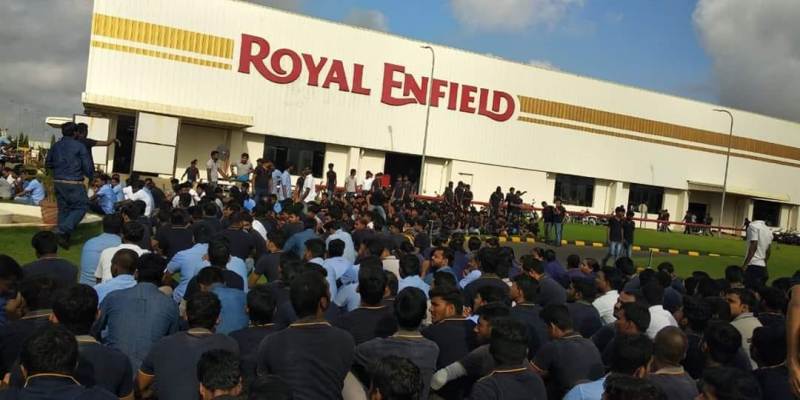 Due to the one month long strike at Royal Enfield, deliveries of the upcoming 650 twins could be delayed

Tamil Nadu is a main production hub for several top-notch two-wheeler manufacturers in the country including Royal Enfield and Yamaha. With workers could not come on right terms with the management, the agitation has continued for several weeks on and off, and it gets to a point of boiling over.

Yesterday, police detained 2,500 employees from Royal Enfield, Yamaha and Myoung Shin who decided to march a rally towards Kanchipuram District Collector office all the way from Oragadam, as part of intimating the concerned authorities about the non-compliance of notice by the companies.

They were on a sit down strike since last month and wanted their voices regarding various demands to be heard and dealt with. To draw attention and make their insistence public, nearly 1,500 workers from Royal Enfield, 800 from Yamaha and 200 from Myoung Shin automotive were on a strike in the streets.

It’s the 29th day of employees refusing to work at Royal Enfield, 33rd day at Yamaha and 48th day at Myoung Shin. The protest rally was organised by Centre of Indian Trade Unions (CITU) and Royal Enfield Employees Union. Yamaha workers demanded reinstating two of their colleagues who were fired for trying to form labour union while the striking RE and MSI employees wanted better wages as promised by the state government and the companies.

Royal Enfield Employees Union rallied to implement the necessary orders received from the labour department of Tamil Nadu on September 27 to allow workers to resume their normal duties at the company. The two fired workers were also ordered to be reinstated by Yamaha India on October 3.

The frustrations brew for nearly three weeks, as the orders were not put into effect. While the workers did jointly seek the permission for rally five days ago, they were not approved and resultantly they decided to walk the distance anyways before being detained by police and sheltered in four marriage halls and a school near Vallakkottai in Kanchipuram as no FIR was filed.