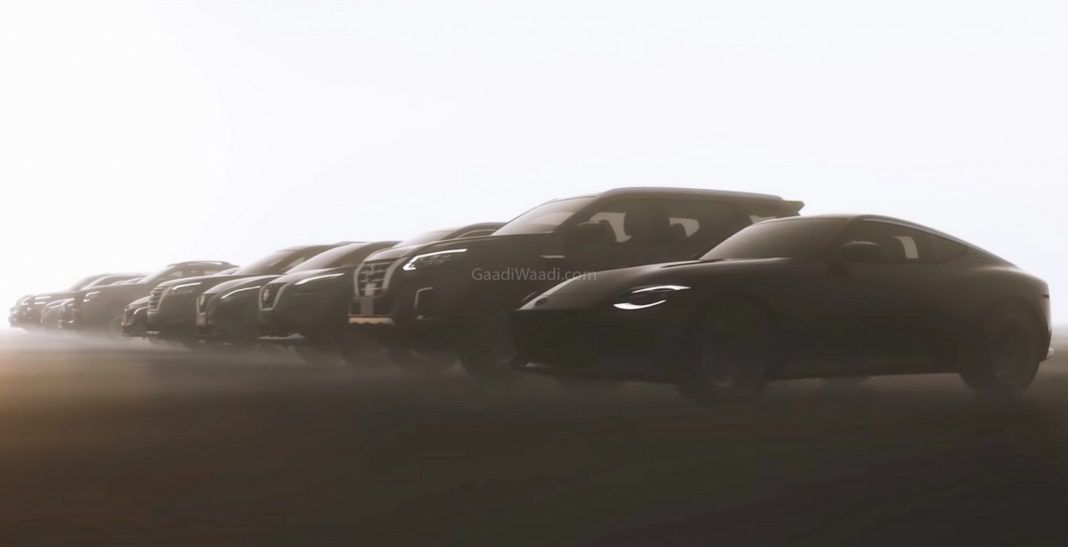 Just when it looked like Nissan is not left with many more tricks up its sleeves, its has surprised everyone by teasing a slew of new cars, including the 400Z, New X-Trail and more

Speculations have been rife that Nissan, the renowned Jap carmaker, could cease operations in several markets owing to consistently poor sales performance. Today, however, the company decided to surprise everyone by teasing a handful of new cars that it plans to launch in the coming future. This simply means that the carmaker isn’t done yet.

The highlight of the 12 new cars it plans to launch is the next Z car, which is expected to be called the 400Z. The successor to the highly successful 370Z will carry over the iconic fastback profile. It will feature the new Z logo on the C-pillar, have a chrome roof trim and carry circular daytime running light to pay homage to the 240Z. While details on the specs are yet to be out, chances are that the new model will get a twin-turbocharged V6 motor that could be related to the excellent VR38DETT 3.8-litre unit in the GT-R.

The updated motor could put out more than 500 hp, which is something that will allow the new Z car an entry into the supercar club. Also, with the recently revealed teaser, it’s clear that the new model will be a true two-door low-slung and not a crossover. Other than this, the company has even teased its upcoming Ariya electric SUV, whose concept model debuted at the last year’s Tokyo Motor Show.

The production-spec Nissan Ariya will offer a range of up to 480 km and will be capable of
Sprinting from 0 to 100 kmph in less than 5 seconds. Also, the company has teased the upcoming North America-spec Patrol that was already updated last year. Another car that we’ve already seen is the updated Kicks crossover.

However, a new model that we’re yet to see but has been teased recently is the Nissan NP300 Navara facelift, which seems to get Patrol-inspired C-shaped LED DRLs. The Terra SUV will also get a cosmetic update and should come with a new front fascia. Other than this, we’ll even see the next-generation Note.

Next, let’s come to the company’s popular SUV pair, the X-Trail and the Qashqai. Both these models will get completely redesigned and the teaser images have shown us the former. Even the Pathfinder, a popular three-row unibody SUV, will get a generation change. Another new model seen in the teaser is the 2021 Frontier for the North American market. The new pickup truck could carry over the D40 chassis in an updated manner along with featuring the 310 hp 3.8-litre VQ V6 and nine-speed automatic transmission. Lastly, the company has teased what seems to be a new small crossover that could be sold as the Magnite.