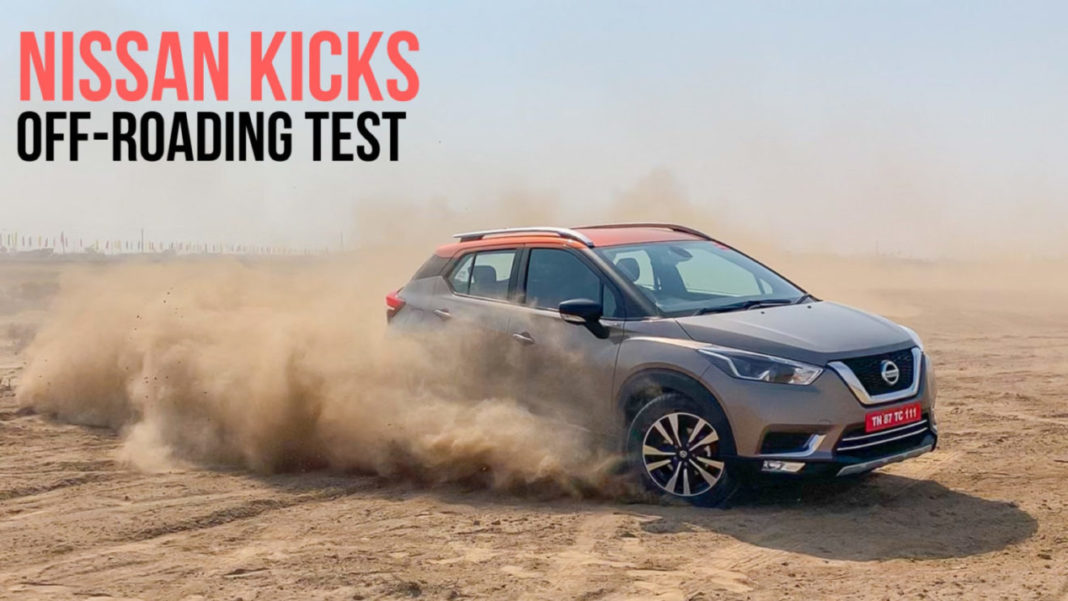 Nissan Kicks’ off-roading characteristics were demonstrated in our comprehensive review video and make sure to check it out!

At the Great Rann of Kutch, we test drove the brand new premium Kicks SUV from Nissan. Waiting to be launched in mid-January 2019, the Kicks will sit on top of the brand’s domestic range and is expected to be priced between Rs. 12 lakh and Rs. 16 lakh (on-road). It will square off against Tata’s upcoming Harrier and the segment leading Hyundai Creta with plenty of stakes bundled on its back.

Apart from the regular bits and bobs we observed from the Kicks drive with more than 250 km under our belt, we were quite surprised by its ability as an off-roader. It gave us an idea of making a worthy off-the-tarmac video to explain you what all the factors that ensure Kicks to be a capable SUV in not-so-ideal conditions.

Firstly, the VDC (Vehicle Dynamic Control) does not just offer stability and composed driving on regular roads but is good enough to pour you more confidence in while maneuvering off it. Even though the suspension was on the softer side, the setup did cope well when we pushed its limits through the notorious sands of Gujarat. The updated platform was sturdy and worked well with the overall stable character of the SUV.

The powertrain had played its part in ensuring smoother power deliver and we so wished it had a 4×4 system to further exploit its potential but Nissan does not offer it even in the V platform based global model. Nevertheless, the front-wheel-drive configuration was capable of taking the battering on any typical condition, like we encountered in the sand.

The India-spec Nissan Kicks comes with class-leading ground clearance of 210 mm and it aided immensely while climbing crests and proceeding down the dips. The tried-and-tested 1.5-litre K9K diesel mill pushed out decent pulse upon driving off-the-road and it was adequate in less extreme scenarios, and it did deliver decent torque as well.

In our off-road drive video, you could readily see the confidence the driver had even on the sand and we would have loved to test it on more difficult environments. We did consider the Nissan Kicks as the best off-roading capable SUV in its segment currently, especially compared to the Hyundai Creta. The presence of VDC ensured it to stand above Terrano and Renault Duster in this particular aspect.