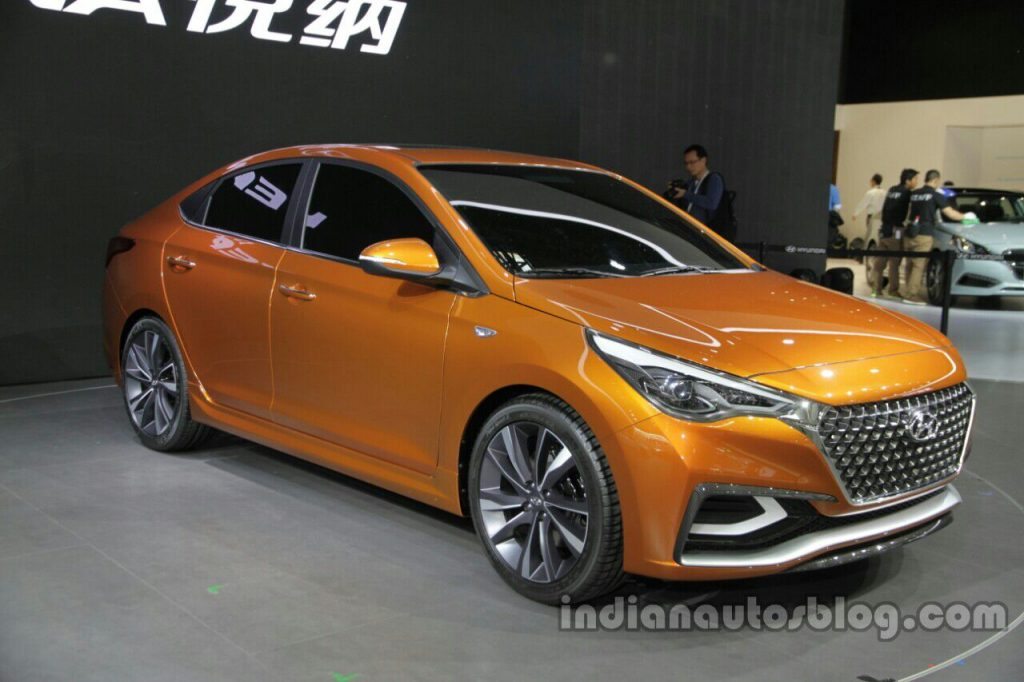 Hyundai has taken the centre stage at the ongoing 2016 edition of the Auto China motor show and revealed a brand new concept. This carries all the more significance to the Indian market as well as the design language could be adapted by the country’s largest export of passenger cars for the new generation models about to come in the approaching years.

The next generation Hyundai Verna concept unveiled will be rolled out on its production form in the later stages of this year at the brand’s home soil, Korea. The design ethos gives a sneak-peak into the India-bound 2017 Hyundai Verna, expected to arrive next year. The exterior is nothing but an evolutionary take on the existing Fluidic Sculpture 2.0 design and it boasts a prominent hexagonal grille up front. The front fascia is accentuated by the sharp looking projector headlamps with LED Daytime Running Lights, sleek fog lamp cluster and lower splitters. The wide bonnet has smooth flowing lines lying just above the sporty bumper with the side profile reminiscing to that of the current generation Hyundai Verna. With that said, the design of the rear doors has been revised and the reprofiled C-pillars promote a coupe-ish appeal. The roofline slopes down to the back and the number plate has been fitted slightly lower than usual. The appreciative character lines all around propel the futuristic stance of the concept as the stretched-out LED tail lamps and cutesy lip spoiler adorn the rear portion. No mechanical figures of the concept have been revealed yet but it does preview the India-specific Verna about to grace showrooms in the early months of next year. Hyundai launched the 2015 Verna with a price range of Rs 7.74 lakh to Rs 12.20 lakh (ex-showroom, Delhi) in the Indian market last February. It came along with quite a few design and mechanical modifications despite not being a new-gen model.

For instance, the rear suspension was stiffened and the steering made heavier to address the handling compliants. The front fascia received noticeable changes with dual-slat chrome grille, redesigned bumper and the larger projector headlamps with curved out fog lamps in addition to LEDs on the taillamps. The sedan continued to feature the same engine line-up with 1.4-litre and 1.6-litre petrol and diesel engines at various states of tune. The offered transmission options are five-speed manual, six-speed manual and four-speed automatic.

The new generation 2017 Hyundai Verna is more likely to make global debut during the course of this year and it has been spotted testing several times in the past few months. Few days earlier a speculative rendering appeared on the internet as well and it’s been shown below. The production version of the India-bound Verna will sport a hexagonal stylish and large front grille with horizontal slats and chrome embellishment as seen from the spy shots. The front grille is complemented by the stylish and sharp front headlamps. The other revised features include redesigned larger ORVMs with side turning lights, large wrapping around taillamps, repositioned registration plate.

The changes carry into the cabin as well. Inside the cabin, the new Hyundai Verna gets an i20 inspired steering wheel, redesigned instrument cluster, a fresh looking centre console with silver trim. The rear compartment of the car gets a dedicated HVAC vent. So far, the entire cabin has gone through a complete revising attempt. The spy pictures of the interiors clearly denotes the inclusion of rear Air Conditioning vents that have become a must-have feature in its segment. Along with that, updated touchscreen infotainment system with GPS navigation, revised upholstery and cabin trims as well as improved instrument cluster are expected in the new generation sedan.

As for the mechanicals, no changes to the engine options are likely to be accompanied but the four-speed automatic transmission could be ditched in favour of a seven-speed dual-clutch automatic gearbox.