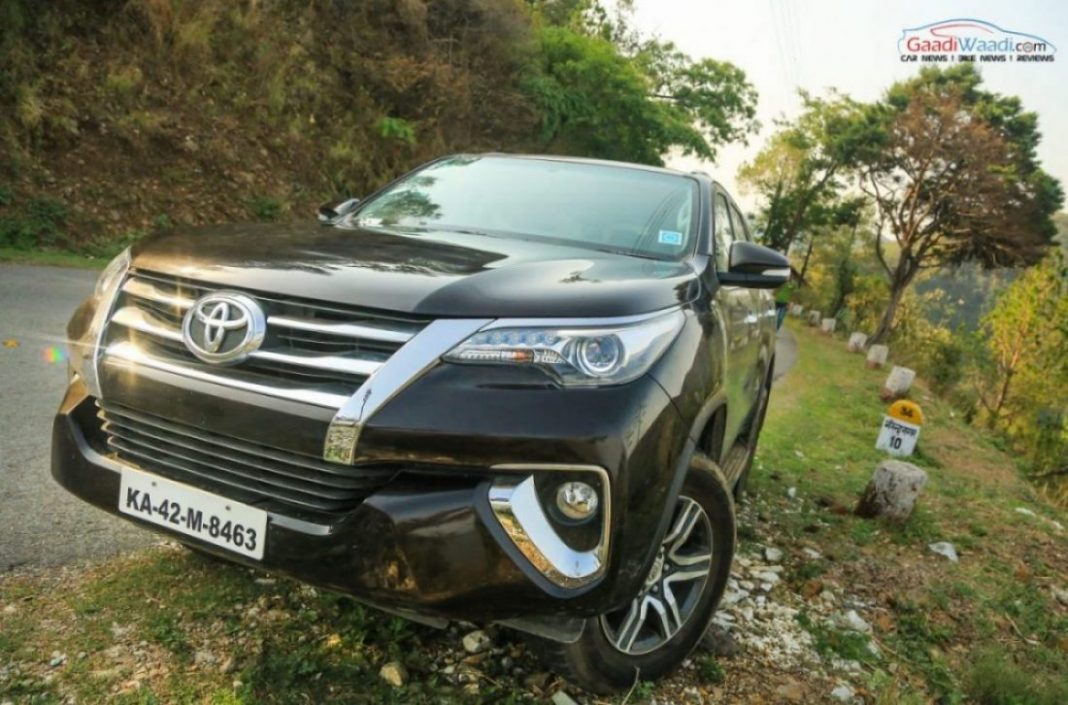 All thanks to NGT (National Green Tribunal) that Toyota had introduced the 2.7-litre petrol engine first in Innova Crysta before its entry into the new Fortuner in India. Cumulatively, both models contribute to just 1.5% petrol sales compared to diesel. Out of 7,604 total units of both Fortuner and Innova Crysta sold in May 2017, only 119 were of petrol versions and in which the Fortuner numbers were just 41 units.

So, to find out the worthiness of petrol over diesel, which is just 1.5 lakh cheaper and comes only in 2WD option, we took the new top-of-the-line Fortuner petrol AT for a 800+ km drive all the way to Devbhumi of India “Uttrakhand” last week from Gurgaon. 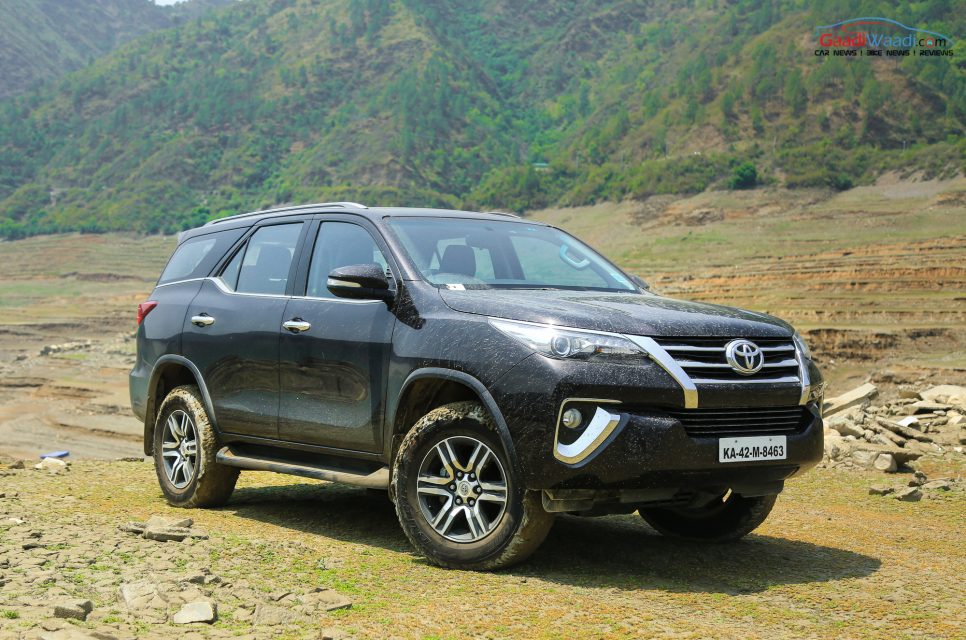 i was accompanied by my 5 cycling club friends and we left at around 11:30 pm on Friday night after resetting the fuel consumption readings in MID in the hope of an exciting weekend with the petrol beast. As we were 6 in number, the shortest 2 were into the last row – both of them are cool and calm personalities and thus agreed.

However, they were hardly visible from front row as the middle row doesn’t have the captain seats like the Innova Crysta even as an option – cutting them out from the rest of the cabin. 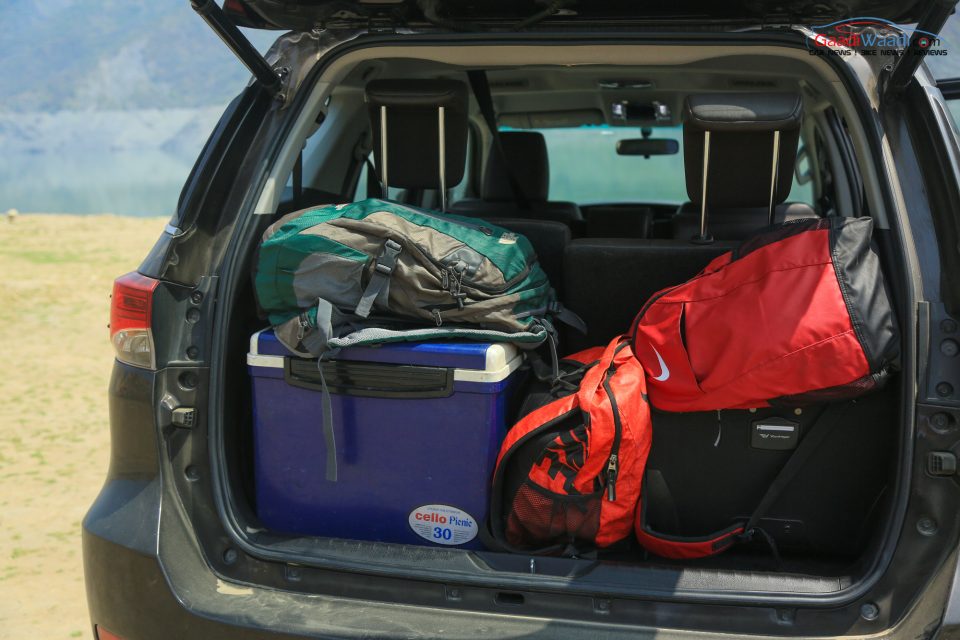 We had enough luggage along with a chiller box resulting in boot space utilised to full extent. However, fully utilised boot space becomes obstacle for the 3rd reclinable function. But due to the increased length of new Fortuner, small dashboard and the sliding middle row, there is decent 2nd row and acceptable 3rd row legroom available along with good headroom in the segment’s best selling SUV.

The built quality of dashboard is top-notch and seating upholstery is standardised as leather alongside leather wrapped steering wheel, touchscreen infotainment with GPS navigation and drive details info on it.

The MID was showing the fuel consumption after reset at just 4.1 kmpl from our last 45 km drive as we reached Ghaziabad at around 1.00 am on Saturday where we refuelled the big SUV. The next 4-5 hour night drive was a straight highway drive towards the Rishikesh via Muzaffarnagar.

It was the best time to use the cruise control thanks to the cycle, motorcycle, auto rickshaw and tractor less roads at night and I set the Cruise at 90 kmph. In the next 2 hours at around 3 am, the fuel consumption was at 5.7 kmpl – still not manageable figures for a 3 days trip. On the driver’s convenience part, the problem I faced while driving the new Fortuner at night was the unavailability of auto dimming in rear view internal and outer mirrors.

While on the other hand, the more problem came from the AT transmission of the vehicle. The gear indicator was not that responsive, with the actual gear positioning of the SUV is driving on, as you can easily feel the gear shifting but the gear indicator always stuck to just one number. This was not expected from Toyota who is synonym with perfection worldwide. But the most surprising part was the performance of the 2.7-litre petrol engine and specially from the automatic transmission. 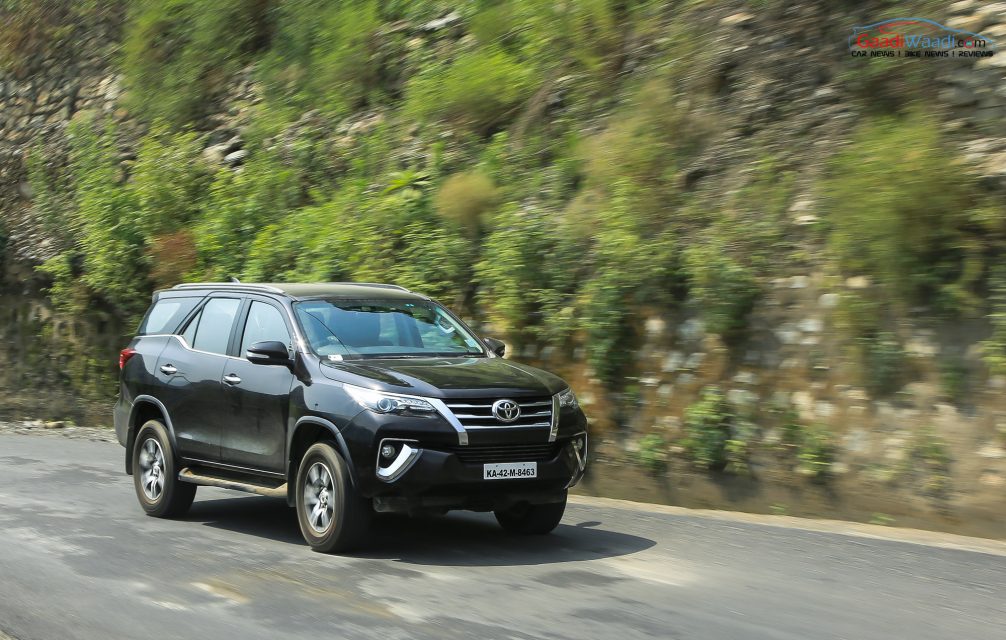 You can clearly feel the noise it generated while upshifting or downshifting and it was very sluggish and power delivery was not that quick as expected from the 163 bhp motor. This petrol beast required lot of effort and longer sprint to overtake if cruising at around 80-100 kmph and definitely this is not the one I wish to drive on highway again in future.

At around 5 am, we reached Haridwar and what the perfect timing was that as the first golden rays appeared from the windshield ensuring the crack of dawn and my photography companion captured the first pic of the drive. 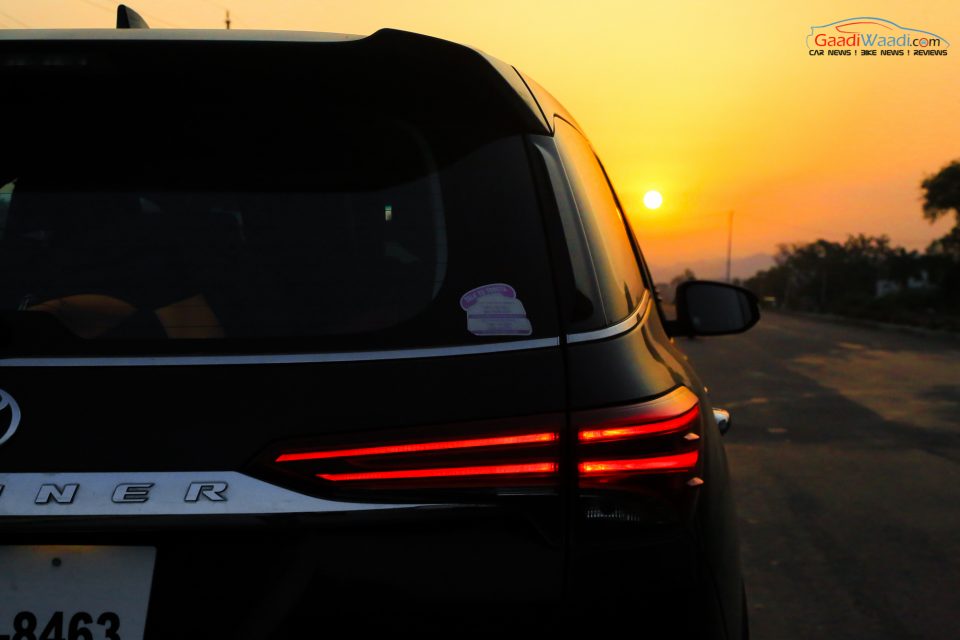 It was a nice click of the wrapped around taillamps that look fabulous on either ends of the Fortuner emblemed chrome strip. From the rear, the new one is way ahead of the First generation Fortuner. At around 6:30, we had our second refuel as we were heading towards Tehri Dam and the full tank to full tank mileage was at 9.44 kmpl as we drove 221 km with 23.25 litres of petrol on the full highway drive from Gaziabad to Rishkesh.

Moving forward, we were on the state highway towards Chamba-Tehri and it was the true test of the petrol powertrain on hilly roads. As its initial drive experience throughout the night, the petrol motors dropped all its tranquilness and the absence of active noise cancellation can be felt easily. 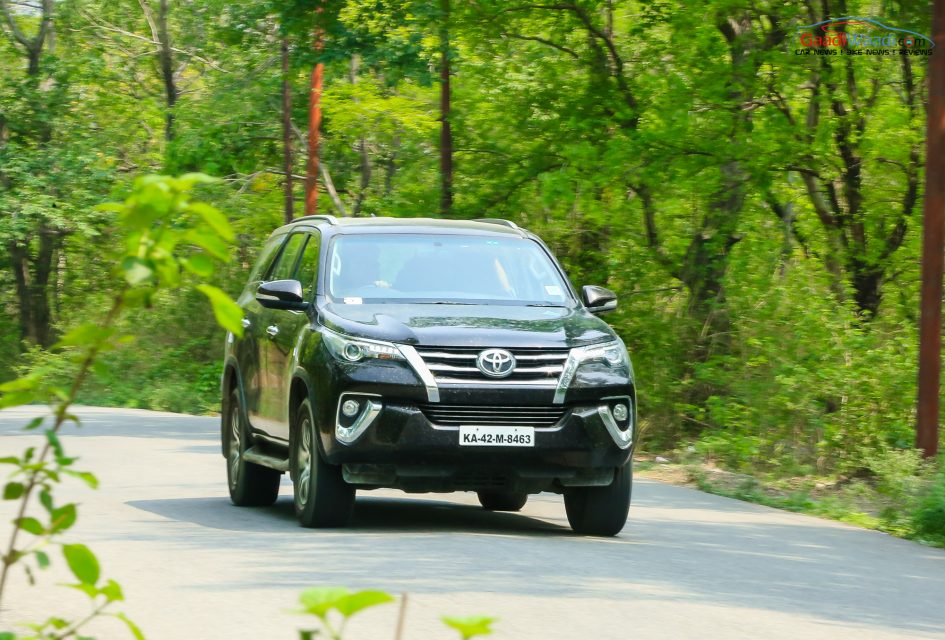 Being on the hilly roads and passing the big turns every 400-500 meters, all the 3 row passengers were very comfortable as the new Fortuner has very less body roll – taking into fact it is an SUV after all. The lusty green surroundings made the trip more exciting  but we seriously missed the absence of sunroof in the new Fortuner. We had some photography breaks around Narender Nagar on the beautiful green mountains. 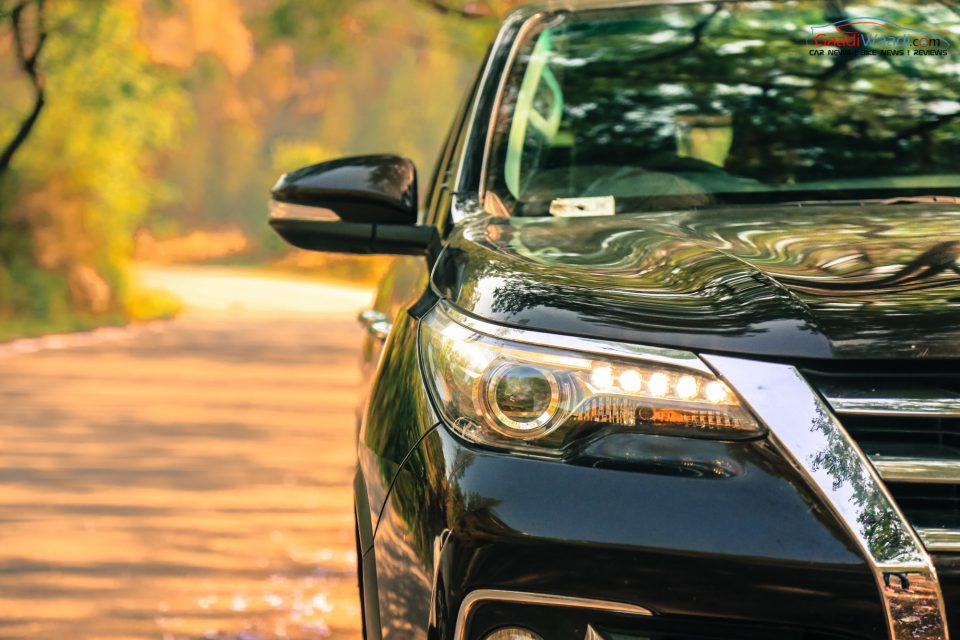 The sleek LED headlamps with DRLs and bulky front bumper with chrome inserts made the new Fortuner’s front view as exciting as the view we had been offered by nature. While at the side, the longer looking new Fortuner with protruding rooflines gave the stylish and grand appearance to the SUV. 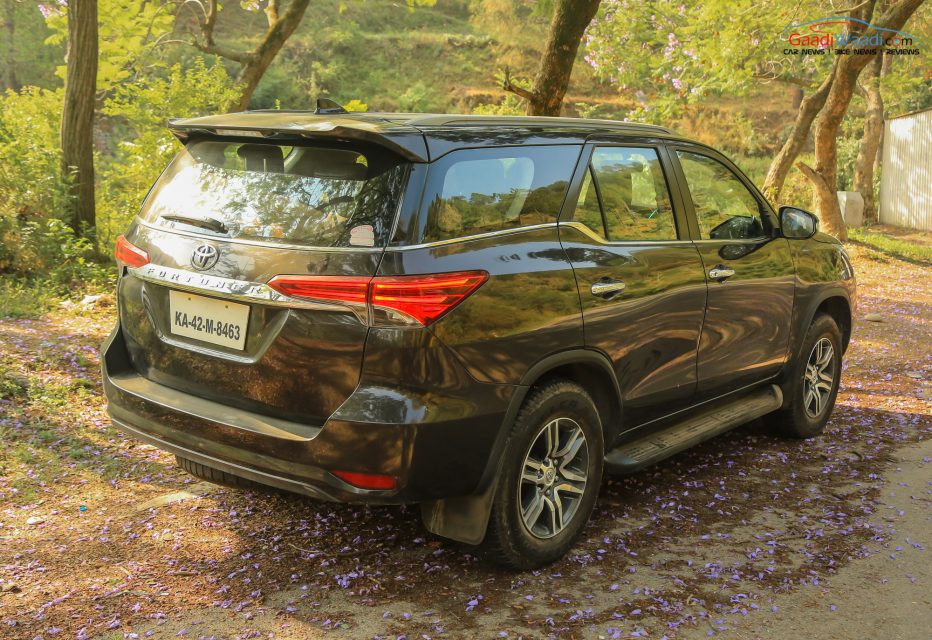 No doubt, the exterior is the main USP of the brand Fortuner and that’s why it is been the first choice for the people of political background in India. The new Endeavour made some dent but by a small margin as the Fortuner still holds 75%+ market share in the segment. 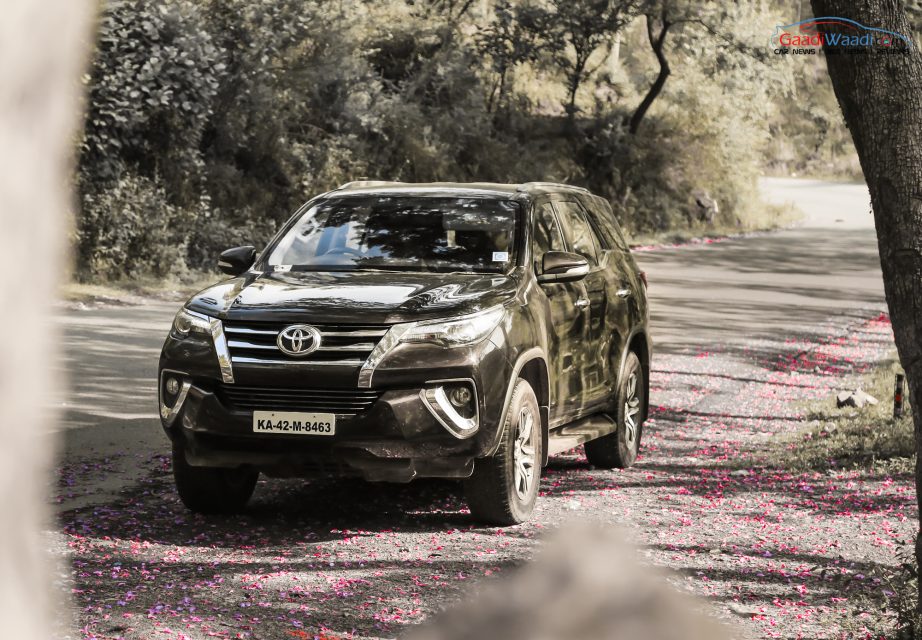 We reached Chamba in the speculated time thanks to the traffic free roads but the next 20 km drive towards Tehri Dam was the real test of the suspension setup of the SUV. The new Fortuner is equipped with double wishbone front suspension along with 4-link with lateral rod at the rear.

The new improved suspension does the duty very well on the under construction road that was full of pot holes until Tehri. That was a much improved ride comparing to the first-gen Fortuner and the road noisy was hardly audible into the cabin. 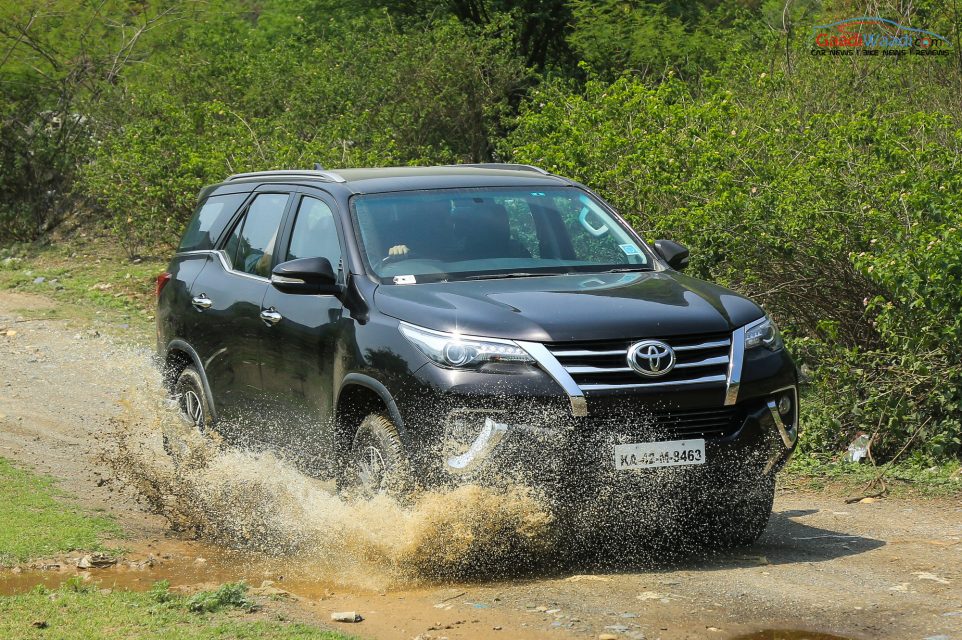 The only drawback I found in the ride quality was the presence of fully electric power steering over hydraulic as it lacks the steering feedback comparing to the previous generation Fortuner. However, the steering adaptiveness was perfect throughout our long trip.

At around 10 am, we reached the Tehri Dam which is one of the highest DAM in the world that generates over 1000 MW of hydroelectricity. For your kind information, this project took around 45 years to complete OMG! Recently, the government started the water sports activities like jet skiing, boating and rafting that turned the Tehri dam a good weekend gateway specially for Delhiets. 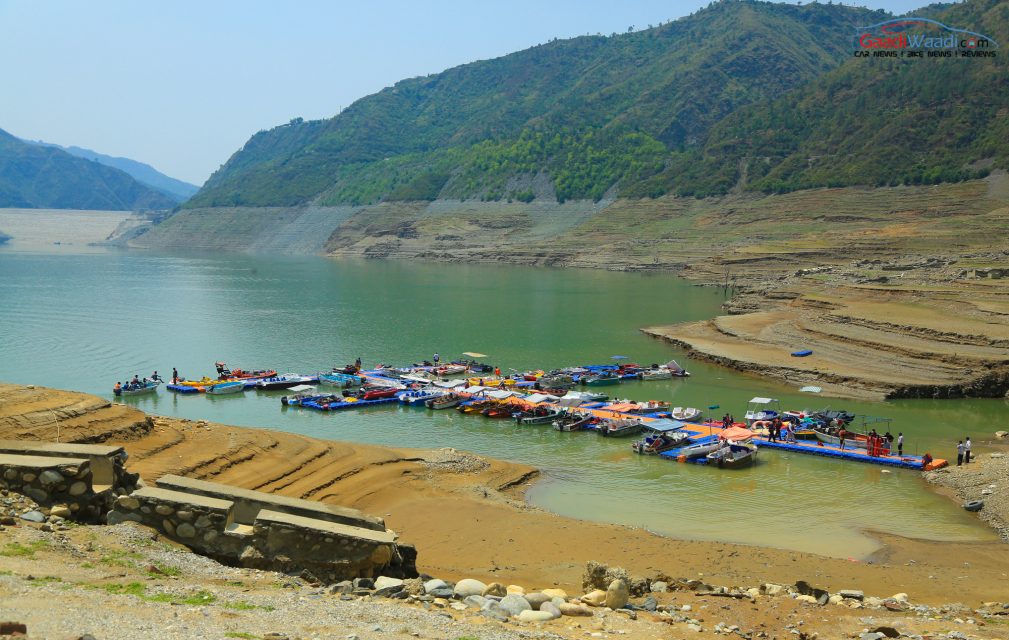 While my mates were enjoying the sports activity and maggi noodles over there, I was busy in testing the off-roading capability of the only available 2WD drivetrain of the petrol version in the muddy field, which came recently out of the water due to the reduced water level of the dam. 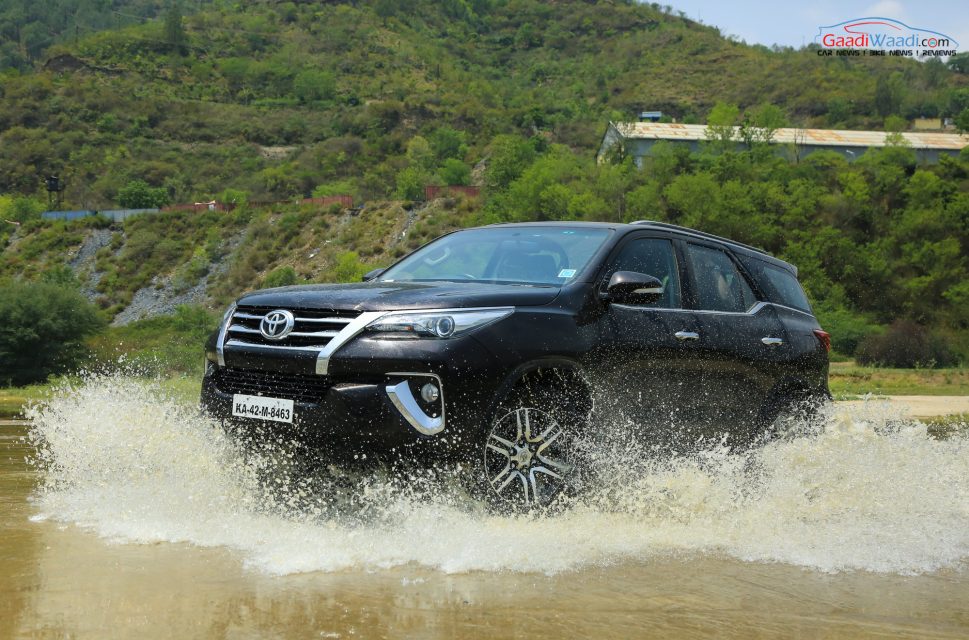 The 2WD drivetrain allows some off-roading capabilities all thanks to the 220 mm of ground clearance and 265/65 R17 tyres. However, an optional 4WD in petrol could have been made the off-roading experience more adventurous. 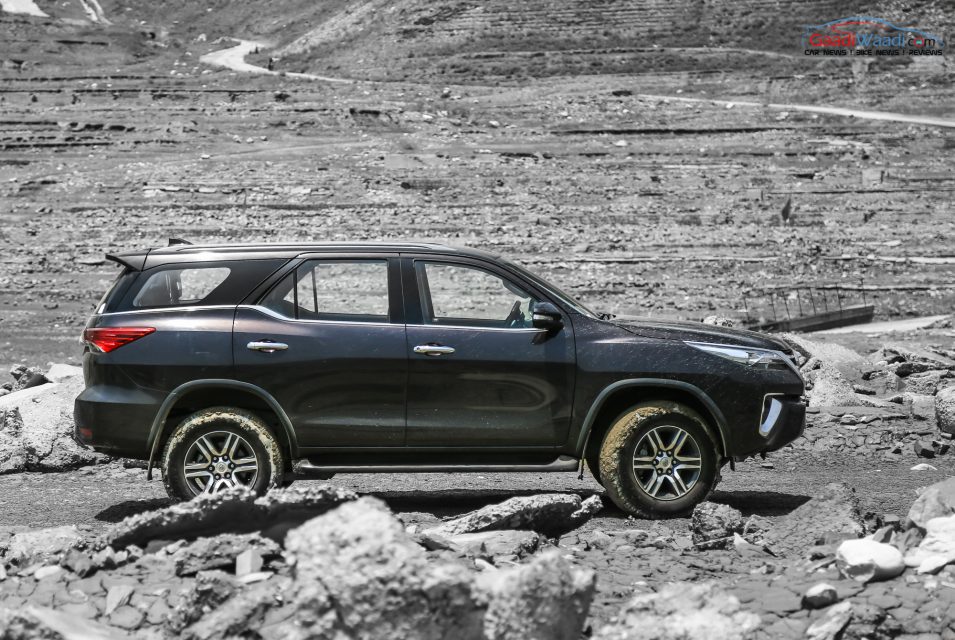 By 3 pm, we reached back to the Rishikesh but got stuck in traffic Jam for 2 hours in the hot weather of 41 degree Celsius. The automatic dual air conditioning system kept all of us sweat free though.

Only by 6 pm, we reached at our river-side camp after spending almost 18+ hours on road but surprisingly there was no fatigue felt especially by me as I was driving almost on the complete journey, all courtesy of Toyota for equipping the new Fortuner with the comfortable seats. 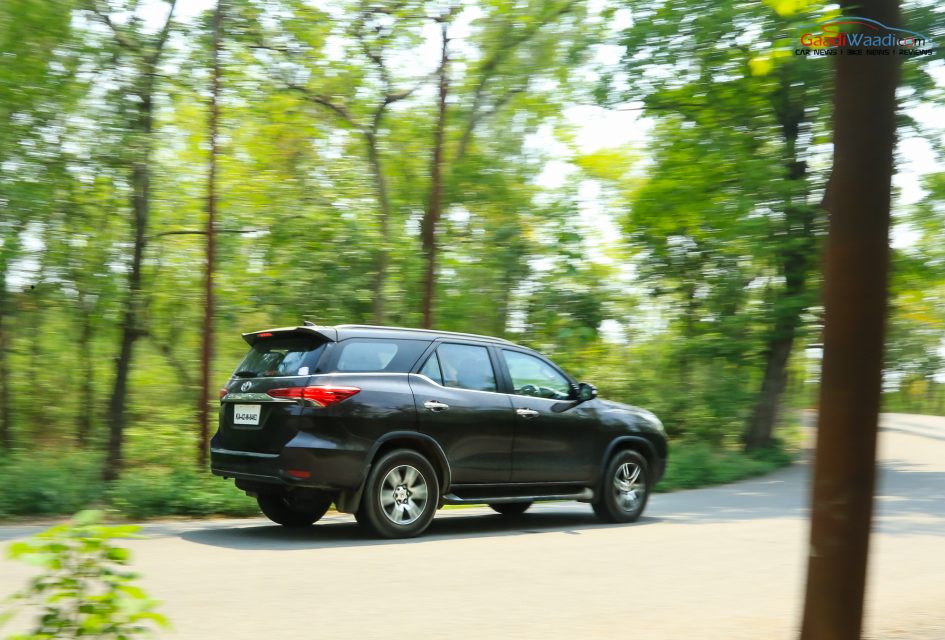 The dinner was great followed by the relaxing sleep and we were allotted for the early morning 9:30 am slot for the 16 km long river rafting. It was one of the greatest adventurous activity I did right into the holy river Ganga. By 12:30 pm we finished the rafting and left from Rishikesh towards Delhi at around 1:30 pm. 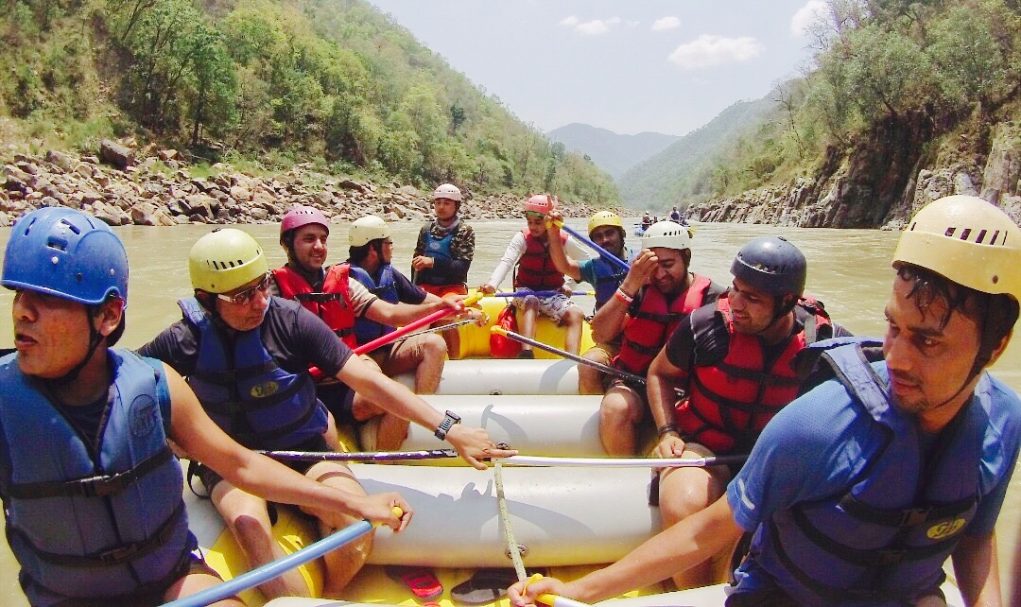 Again, we got stuck in huge traffic jam for further 2 hours and reached Delhi at around 11:30 pm with one more fuel top-up. The trip was of 866 km over 48 hours and we managed to get 6.8 kmpl of mileage overall and it could have been more better if we wouldn’t have had stuck in traffic jam for almost 4 hours. 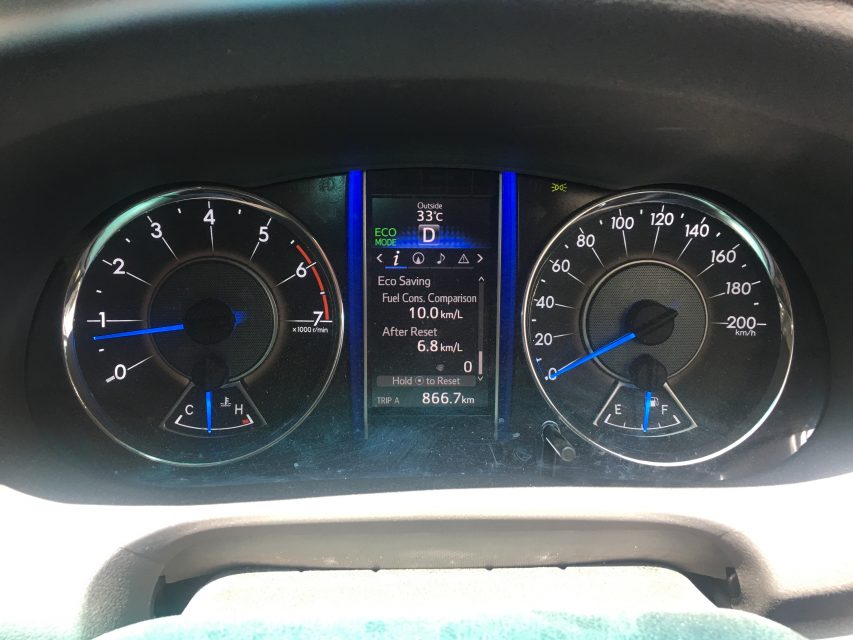 The overall cost for the fuel we incurred for the trip was over Rs. 8,500, which could have been half if we had driven the diesel version instead. However, if it is manageable FE figures for some of the prospective buyers then there are two more concerns remain in the SUV i.e sluggish AT transmission and unavailability of 4WD system. 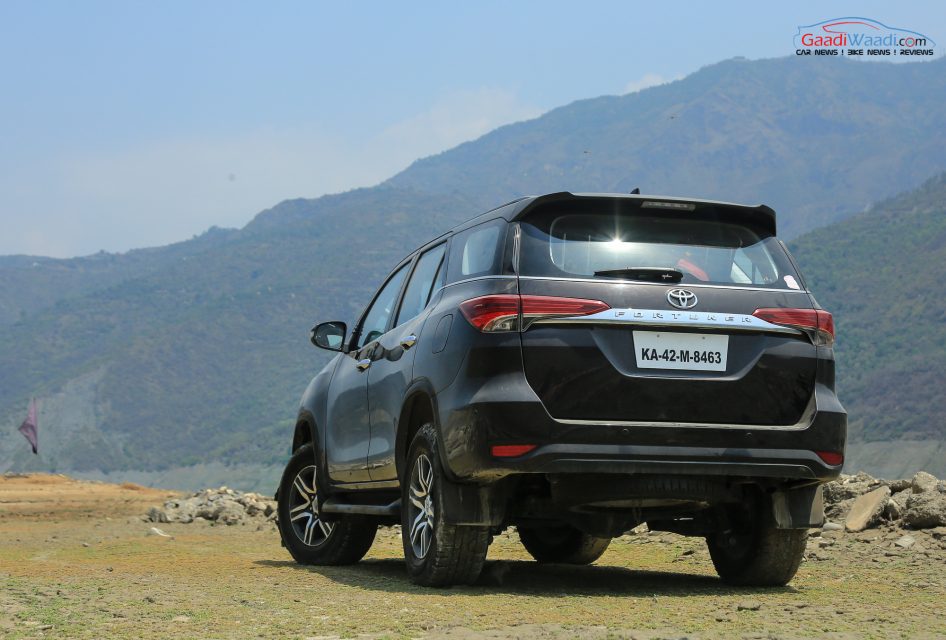 In the end, I would say the NVH of diesel is much equivalent to petrol version and the 400 Nm mighty torque of diesel makes your every drive pleasant but the absence of sunroof is still there too on the oil burner.

Explore the HD pics from the trip here