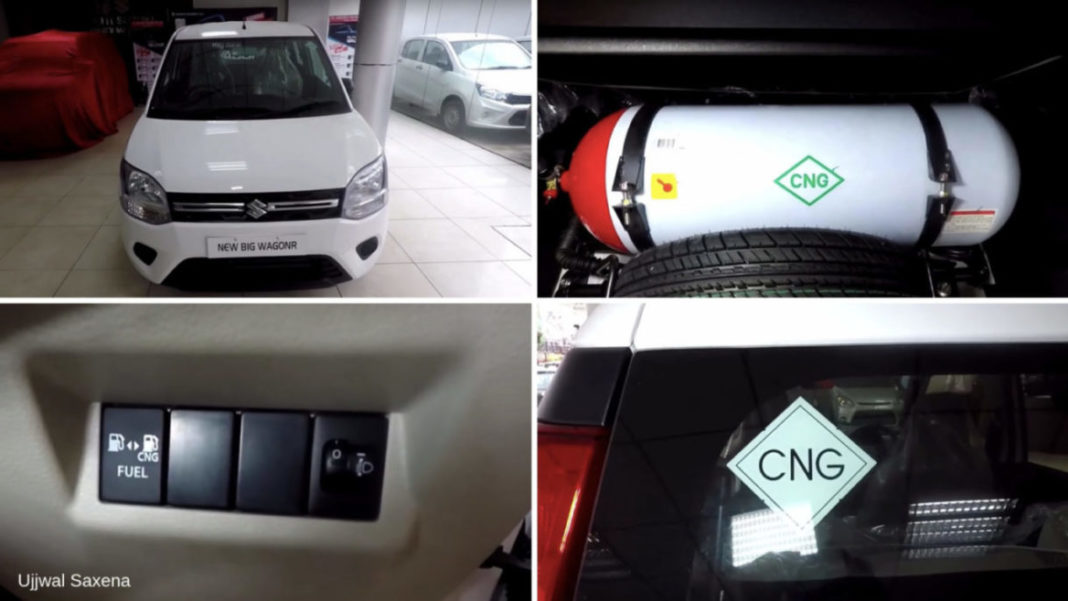 2019 Maruti Suzuki Wagon R CNG is sold in two entry-level trims with 1.0L engine and it has claimed mileage of 33.45 km/kg

A few days ago, Maruti Suzuki introduced the CNG variant of the Wagon R just over a month after the third generation model entered India in price range of Rs. 4.29-5.79 lakh (ex-showroom, New Delhi). The CNG version is a much-needed addition to the new Wagon R’s range and realising that Maruti Suzuki has priced them aggressively at Rs. 4.84 lakh and Rs. 4.89 lakh for the LXi and LXi (O) trims respectively.

It is Rs. 40,000 more affordable than the Hyundai Santro CNG but the latter does offer more features. Sold only in two trims, the 2019 Maruti Suzuki Wagon R CNG is available with the long-serving 1.0-litre petrol engine as the previous model and is good enough to produce 68 PS of maximum power and 90 Nm of peak torque.

Wagon R Cng paired to a five-speed manual transmission as before and is claimed to return 33.45 km per kg of fuel. A YouTube video posted yesterday by Ujjwal Saxena shows the positioning of the factory-fitted CNG tank and the associated changes in the Wagon R. The tank and spare wheel occupy majority of the boot volume as expected, and the overall dimensions do remain identical as its petrol-powered sibling.

Having been available for more than two decades, the Wagon R is one of the consistent sellers for Maruti Suzuki and has clocked over 2.2 million units. The third generation tall hatch, with its myriad of changes, is expected to replicate the success of its predecessors. Based on the fifth-gen Heartect platform as the Swift, Dzire, Baleno and Ignis, the 2019 Wagon R is lighter as well as safer.

Due to the more composed architecture, it has seen improvements on the dynamics side and gets added standard safety features. The interior comes with more premium equipment including a SmartPlay touchscreen infotainment system to supplement the changes made cosmetically. Arguably, the biggest inclusion to the lineup is the 1.2-litre K series petrol engine from Swift.

It is retailed in VXi and ZXi variants and can be had in both five-speed manual and five-speed AMT transmission choices. It produces 83 PS and 113 Nm and is ARAI-certified to return 21.5 kmpl fuel economy.