RS Kalsi, Senior Executive Director (Marketing & Sales), at Maruti Suzuki India Limited has said that the new generation Ertiga has received about 23,000 bookings since making market debut late last month. He expects the company to post good sales growth in the final quarter of this financial year (January to March 2019) with the new Ertiga and another launch planned for early 2019, which presumably is the new-gen Wagon R.

Suzuki hosted the world premiere of the new generation Ertiga at the 2018 IIMS (Indonesia International Motor Show) in April and arouse more anticipation for India launch. The thoroughly overhauled Ertiga seven-seater MPV finally broke covers in the domestic market on November 21 with prices ranging between Rs. 7.44 lakh for the entry-level LXi petrol and Rs. 10.90 lakh for the top-of-the-line ZDi+ diesel (ex-showroom, New Delhi).

The second generation Maruti Suzuki Ertiga is sold in ten different variants and it competes against usual rivals along with the recently launched Mahindra Marazzo. The largest carmaker in the country has made the Ertiga more upmarket in terms of visual appearance as well as interior updates. Moreover, several new features have also been added to the lineup.

The 2018 Ertiga is based on the fifth generation lightweight Heartect platform that helped drastically in improving the handling characteristics and space inside the cabin. The 1.5-litre SHVS petrol engine that debuted in the facelifted Ciaz earlier this year has replaced the 1.4-litre unit. 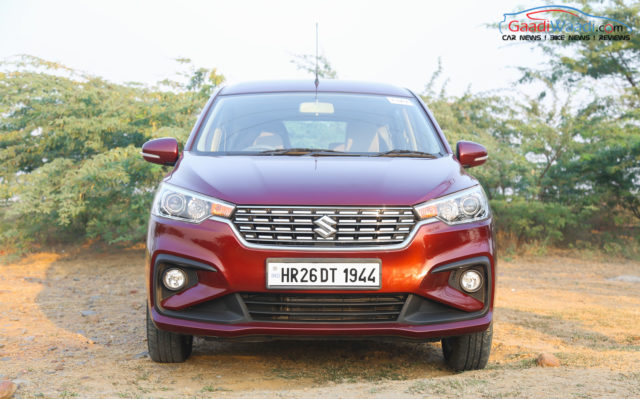 It is good enough to develop a maximum power output of 104.7 PS at 6,000 rpm and 138 Nm output of peak torque delivered at 4,400 rpm. It is connected to a five-speed manual transmission as standard while a four-speed torque converter automatic unit is retailed as optional. The presence of new powertrain allows Ertiga to have a dual battery setup as well.