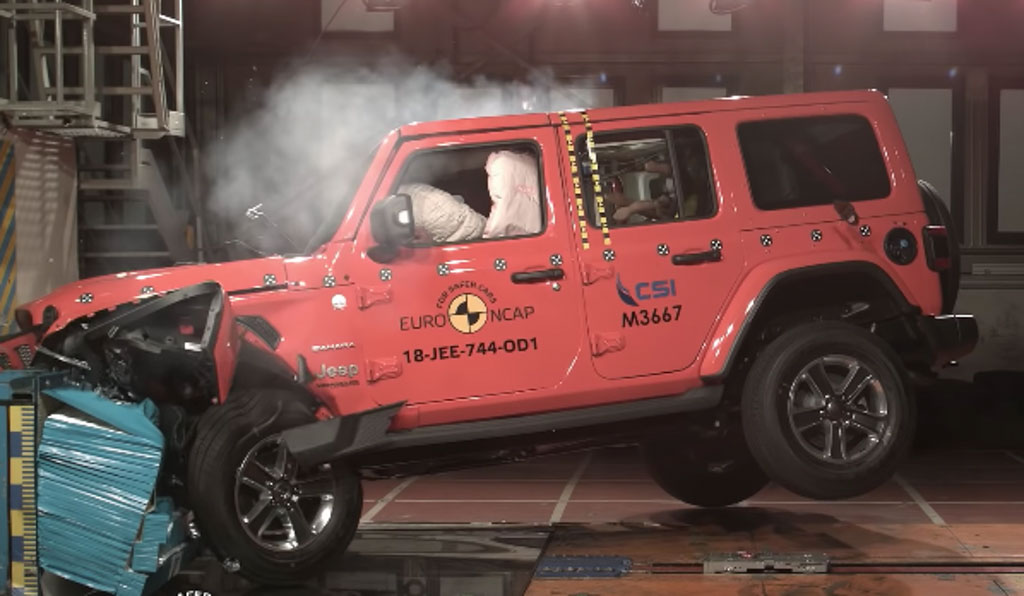 Euro NCAP (New Car Assessment Program) has released results of the latest round of crash tests for new vehicles and the most surprising of the whole outcome definitely belongs to the new generation India-bound Jeep Wrangler. The European safety organisation invited nine cars: Audi Q3, BMW X5, Hyundai Santa Fe, Jaguar I-Pace, Peugeot 508, Volvo V60 and Volvo S60 for evaluation and the results are on table.

The scores of the vehicles that underwent the stringent safety test procedures are keenly observed not just by the manufacturers but the prospective customers as well due to the paramount significance they have on modern day vehicles. With the safety regulations entering advanced stages in developed and emerging countries, it’s crucial to secure at least a decent mark out of it.

While the aforementioned cars all five-star rated to no one’s surprise, Jeep’s latest Wrangler and Fiat Panda did the otherwise. The Wrangler’s one out of five rating is the consequence of lack of modern active and passive safety technologies. Amidst promising to be brand new in every sense, the Wrangler only offers driver set speed limiter, seatbelt reminder, driver airbag, passenger airbags, side chest and head airbags.

The Panda follows the Punto as only the second vehicle to score zero stars under Euro NCAP assessment. It does not even offer lane keep assist, speed assistance, autonomous emergency braking as optional features with seatbelt reminder being the only standard safety equipment.

Euro NCAP stated its displeasure on the Wrangler by saying that it was “truly disappointing” to see a new car in 2018 with no autonomous braking and lane assistance. It also said there’s no better time for FCA to improve its safety standards against competitors.

Even the models scoring five stars were not perfect as for instance the Hyundai Santa Fe had an issue with side curtain airbags and could not be torn while the BMW X5 failed to deploy knee airbag correctly. But overall they have been rated sturdy due to the structure stability and other factors in adult and child occupant protection.