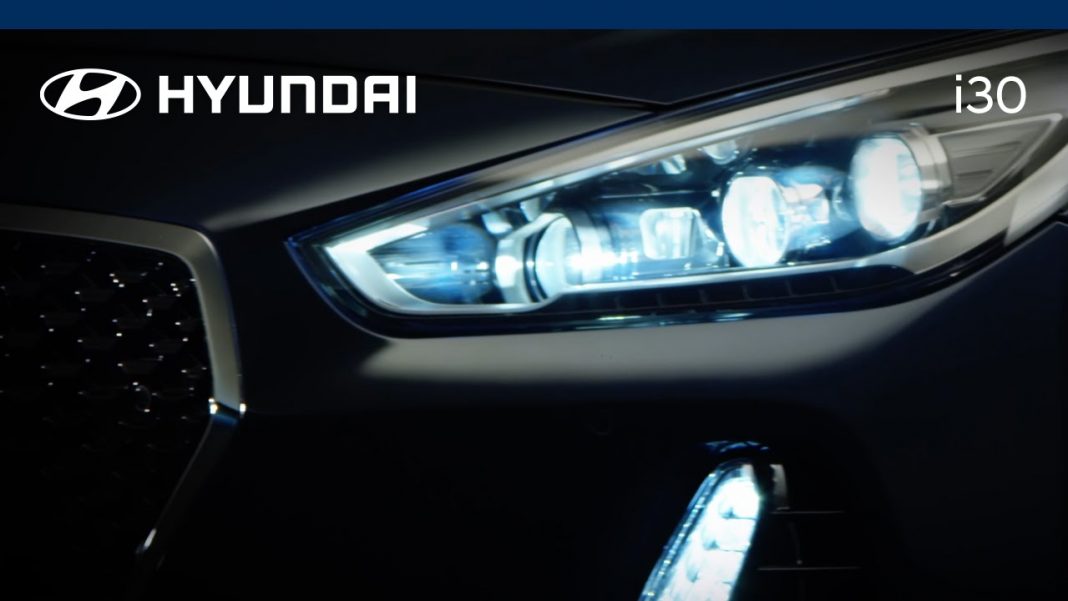 South Korean auto major Hyundai Motor has teased the upcoming new generation i30 premium hatchback. Honestly, the car looks very stylish and upmarket. The car has been tagged as ‘a car for everybody’. According to the automaker the car has been designed keeping everyone’s choice in mind. The car has been already spotted testing several times. But now through the teaser images we get a preview of the production spec model.

The upcoming Hyundai i30 features the new cascading grille, which is the signature grille of the new generation Hyundai models. The single frame grille gets sleek chrome garnishing, with the centre and an aggressive appearance as well. The headlamp clusters get swept back look with projector units, integrated LED daytime running lights. Also the car gets vertically placed fog lamps complemented by large air dams at both sides. The hood gets sharp creases running toward the nose section. The side profile of the Hyundai i30 comes with five spoke alloy wheels, blackened glass area. The rear profile will get sleek wrap around taillights, shark fin antenna, and roof spoiler. So far, the entire car looks sporty and upmarket. Hyundai claims, the car portrays, the design evolution of the company with natural flowing lines and sculpted body.

The interior of the car portrays upmarket look. It gets a multifunction steering wheel, a sleek instrument cluster and a touchscreen infotainment system at the centre console. The interior is spacious and comes with upmarket upholstery materials. The company is tight lipped about the features on offer with the new i30. But expect several safety features and connectivity facilities. Also read: 2017 Hyundai i30 Spotted Towing Trailer at the Nurburgring

The Hyundai i30 will serve as the base of the first model from the company’s N performance division. The Hyundai i30 N Performance will be the name of the performance spec model. The normal variant will get power from a 1.0 litre three cylinder engine. Also the car might get a hybrid powertrain shared with the new Ioniq.