Honda Cars India has the Amaze as its top-selling model within the domestic range and the last month of 2018 was no different as it ensured a strong finish to the year. The compact sedan managed to achieve a total of 5,565 units in December against 1,415 units in the same month the previous year at a massive growth of 293 percent.

Compared to the previous month of November 2018, Honda saw 15 percent increase in the Amaze’s sales as only 4,854 units were retailed. The second generation Honda Amaze was introduced in the market in May 2018 and it overtook City to become the brand’s best-seller in India in a very little time on a segment that has proved to be highly competitive.

In July, the Amaze created a new record by being the most sold individual Honda vehicle in a month in the domestic market with 10,180 units. As much as 9,644 units in August 2018 meant Honda recorded more than 9,000 unit sales of the Amaze for the fourth month running since its official launch, but it could not maintain that consistency in the following months. 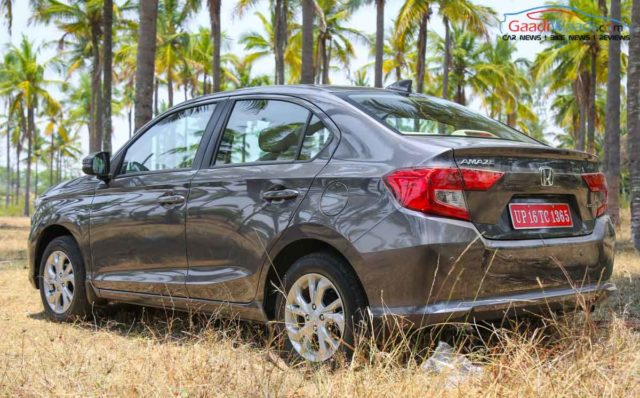 The new generation Amaze wrapped up 2018 with a cumulative sales of well over 63,000 units in just eight months and that’s a big milestone. The latest Amaze made its public premiere at the 2018 Auto Expo and it comes with a thoroughly revamped exterior and interior by being based on a new platform. It boasts an appealing front fascia with design cues taken from bigger models.

Moreover, the interior features two-tone dashboard, seven-inch touchscreen infotainment system with Apple CarPlay and Android Auto connectivity, three-spoke multi-function steering wheel and so on. The Amaze gets powered by the 1.2-litre i-VTEC petrol and 1.5-litre i-DTEC diesel engines. The former makes 89 bhp at 6,000 rpm and 110 Nm at 4,800 rpm.