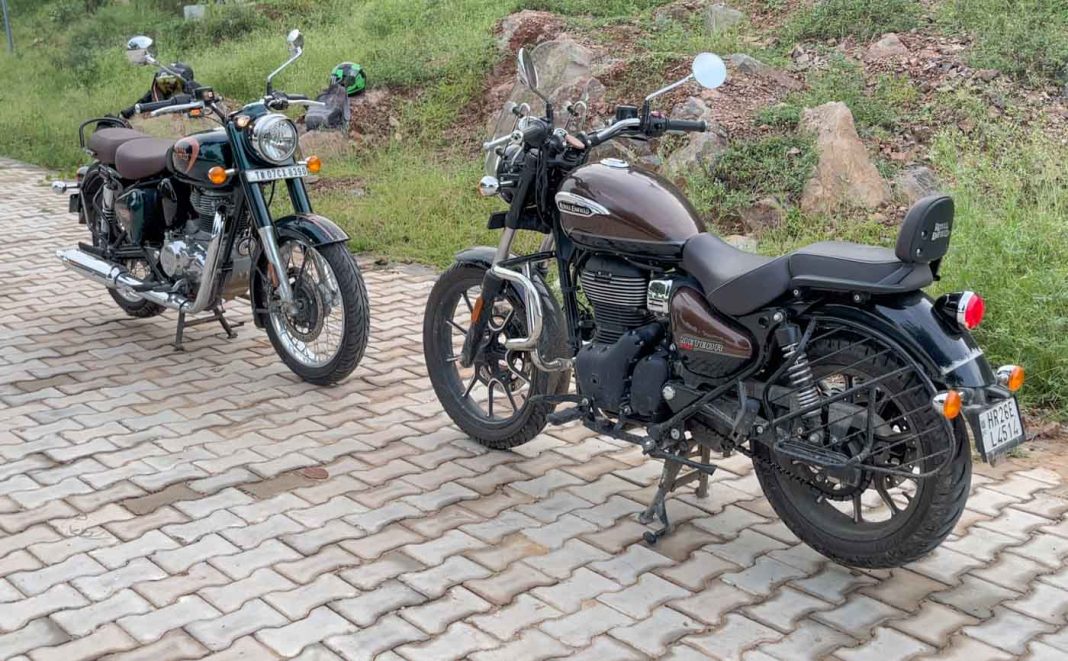 Here, we have compared the spec sheets of the next-generation RE Classic 350 and RE Meteor 350, in terms of design, equipment, engine, etc.

Royal Enfield will finally launch the new-generation Classic 350 in India on September 1, 2021. Although the motorcycle hasn’t officially debuted, spy pictures and leaked documents have already revealed plenty of details about it. Compared to the outgoing version, the upcoming new-gen model is a massive improvement, especially in terms of performance and features.

Here, we have a comparison of the new-gen RE Classic 350 with its sibling, the Meteor 350, to see how these two Royal Enfield bikes stack up against each other on paper.

The next-generation Classic 350 preserves the look of the current model. It continues to get a round halogen headlamp, tiger-eyed pilot lamps, round rear-view mirrors, a long pea-shooter exhaust, a round taillight, and round turn indicators. The motorcycle also gets a rounded fuel tank, 13 litres in capacity. 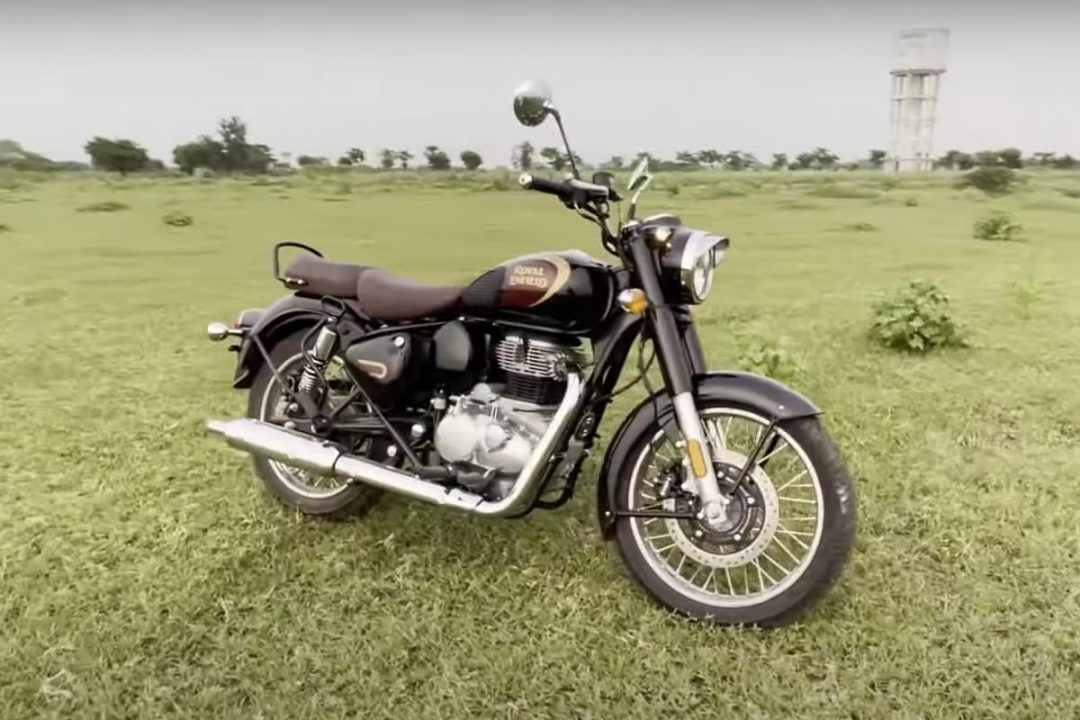 The design of the Meteor 350 is inspired by the discontinued RE Thunderbird. It gets a round headlamp with integrated LED DRL, a tear-drop shaped fuel tank (15 litres), and a round LED taillight. The saddle height is low, the footpegs are set way forward, and the handlebar is slightly high, giving it a typical cruiser-style riding position. 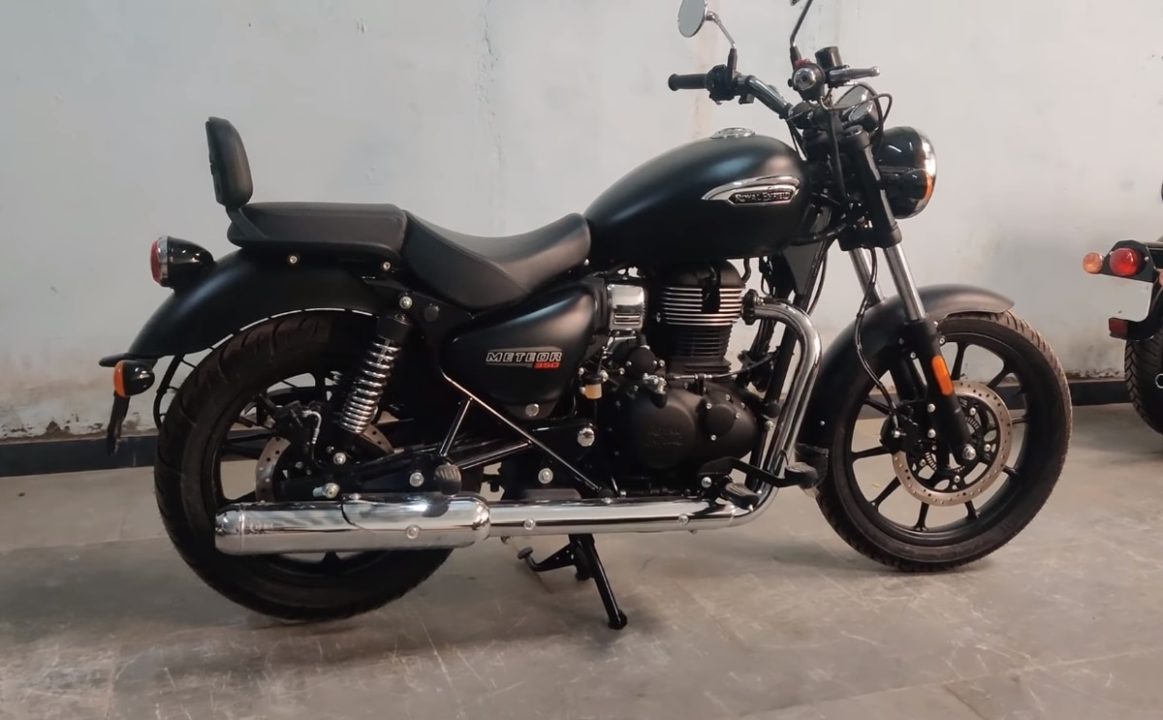 The new-generation Classic 350 and the Meteor 350 have nearly the same dimensions, with the latter being slightly taller with a slightly longer wheelbase. Also, the kerb weight of the Meteor is 4 kg lighter than the Classic, despite having a larger fuel tank, thanks to the use of plastic for select body parts.

With the generation change, the Classic 350 is set to become way more tech-loaded. The bike gets a new semi-digital instrument cluster, with an LCD readout for tripmeter, odometer, and fuel gauge, while the speedometer is still analogue. The switchgear has been updated, with rotary switches for lights and engine start/stop. The tripper navigation feature will likely be optional. 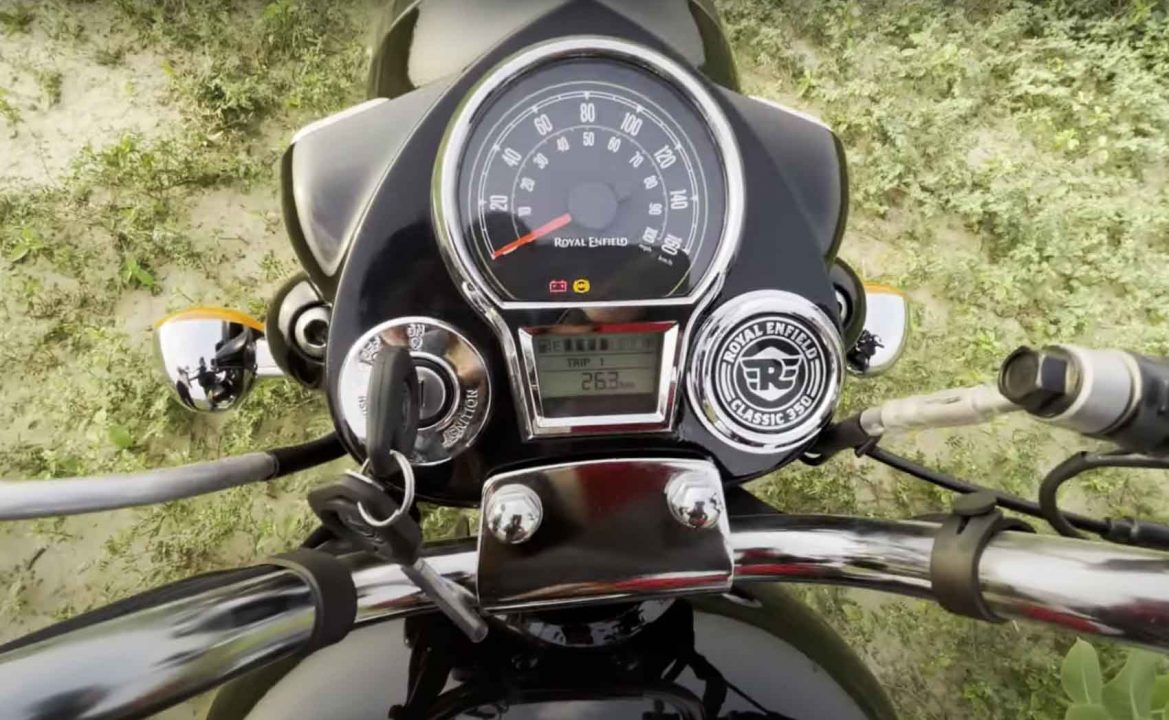 Depending on the variant, single- or dual-channel ABS will be offered. The bike gets a 19-inch wheel at the front and an 18-inch wheel at the rear, which can be either wire-spoked or alloy units. Also, one can choose between single-seat or dual-seat configurations.

The Meteor 350 has even more equipment on offer, the most important being the TFT display with the tripper navigation (which can be operated via a smartphone). It also gets rotary switches, and on higher variants, an adjustable flyscreen is also on offer. 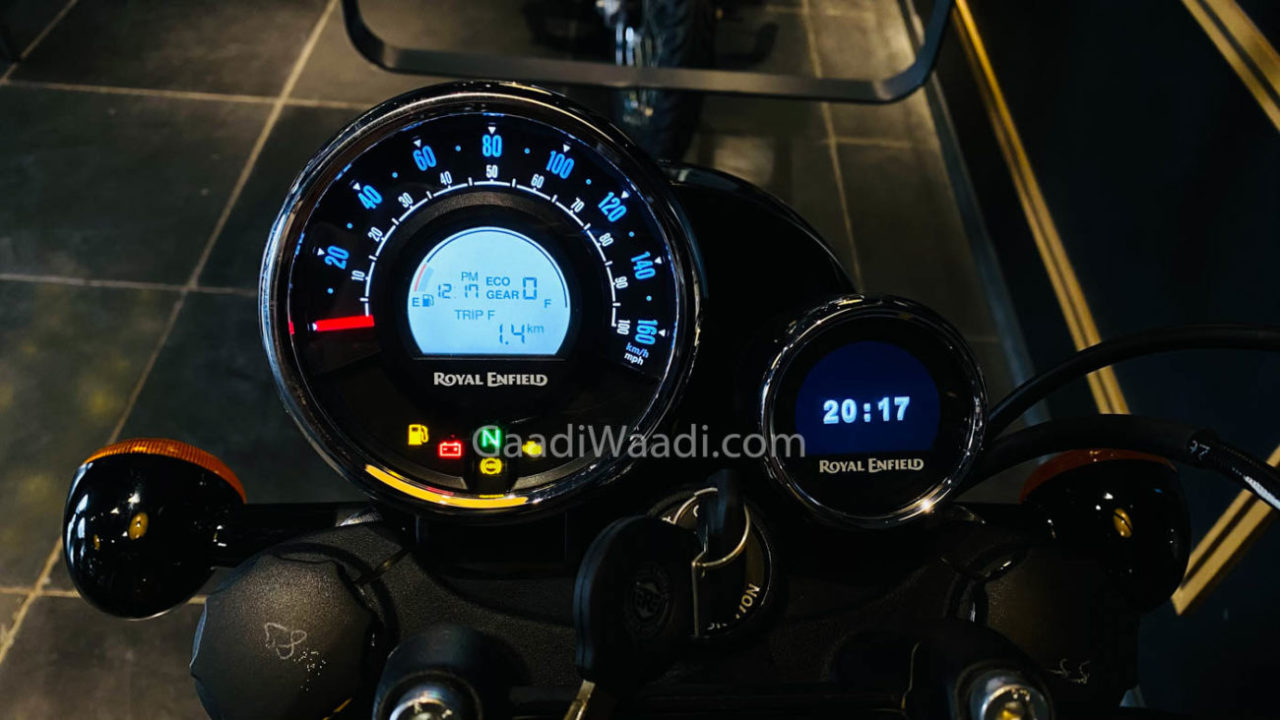 The Meteor gets an LED DRL ring around the halogen headlamp, and the brake light is an LED unit as well. The turn indicators, however, are bulbs. Other features available on the bike include dual-channel ABS, alloy wheels (19-inch front and 17-inch rear), and a pillion backrest (higher trims).

Both the next-generation Classic 350 and Meteor 350 are powered by the same 349cc, air/oil-cooled, single-cylinder engine. This motor is good for peak power and torque of 20.4 PS and 27 Nm, respectively, and comes mated to a 5-speed transmission. 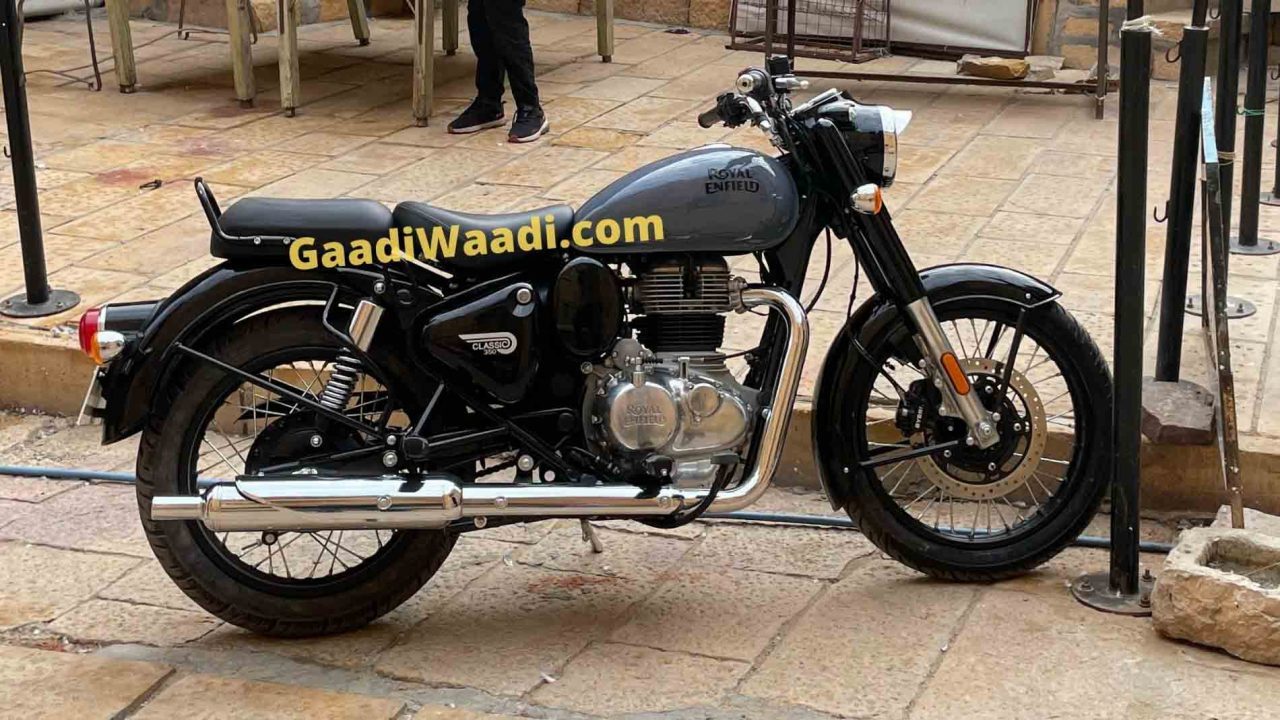 Although the new-gen Classic 350 has slightly more power than the outgoing version, the torque is slightly lower. However, the performance is way better, as the engine is much more rev-happy than before. This new powerplant utilises a single overhead cam setup, ditching the old pushrod-actuated system. 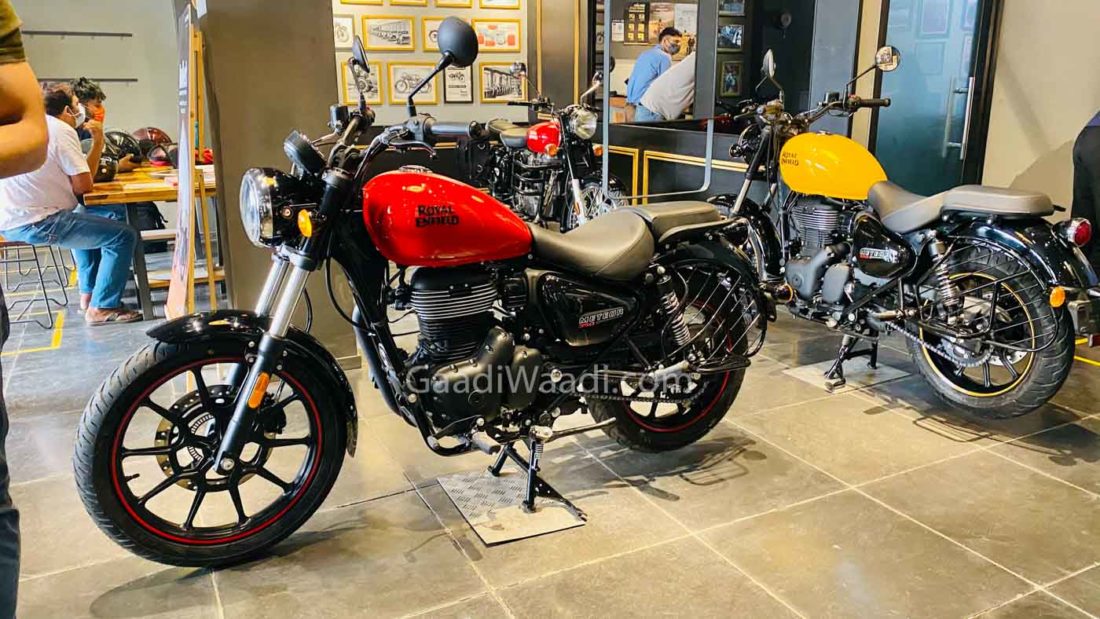 The vibrations on the Meteor 350 and new-gen Classic 350 are extremely well-damped, and cruising at speeds close to 100 kmph wouldn’t be a problem. However, the signature thumping sound has been dulled down as a result of all these changes.

Thanks to plenty of price hikes, the outgoing Classic 350 is priced from Rs. 1.79 lakh to Rs. 2.06 lakh, and the next-gen model will be slightly more expensive than this. Still, the new-generation RE Classic 350 will likely be a success in the Indian market, just like the current-gen model. 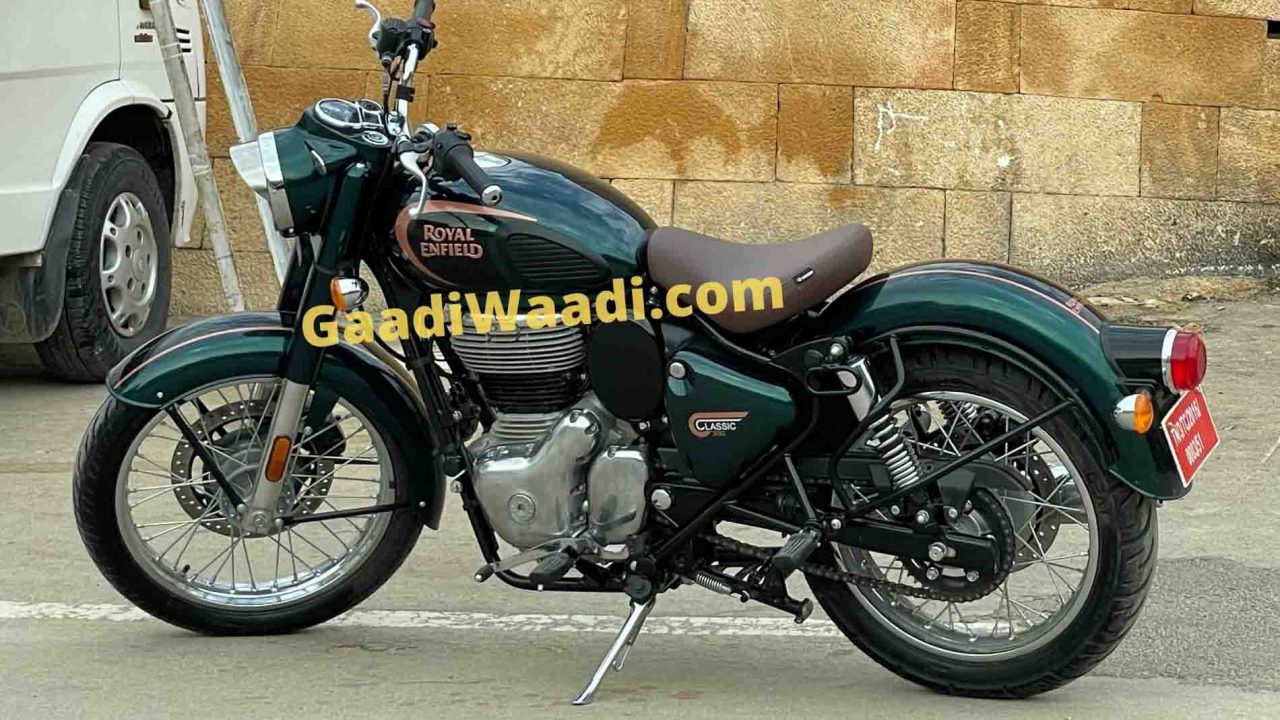 RE Meteor is a better deal overall, as it offers more features, is great for long-distance touring, while still being an extremely stylish machine. It is priced quite reasonably as well, from Rs. 1.92 lakh to Rs. 2.08 lakh.