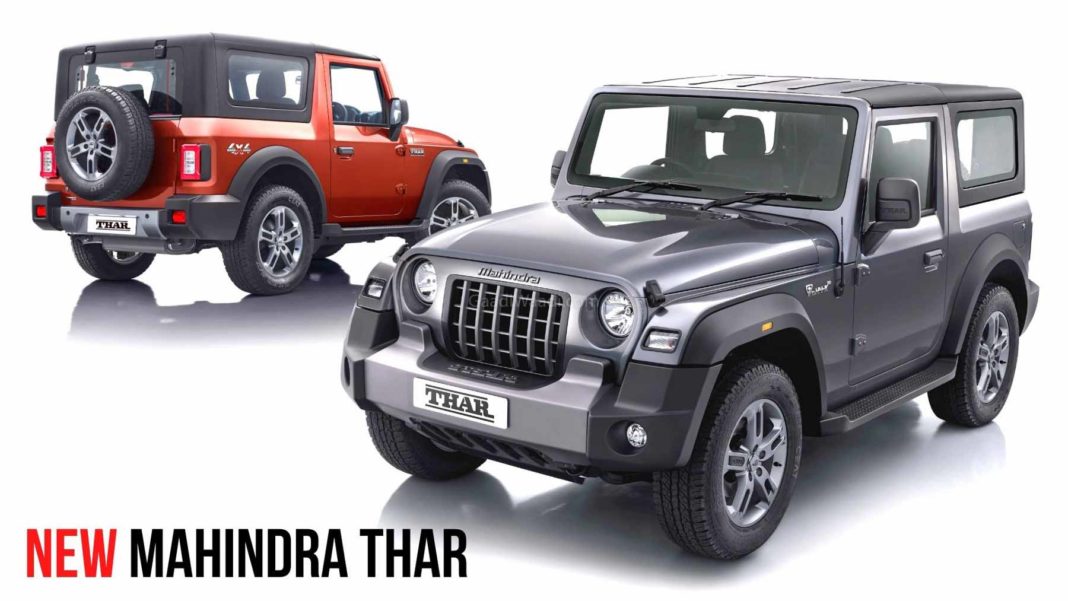 Check out our list of ten features of the second-generation Mahindra Thar, which no other SUV in this class offers

Now that the Mahindra Thar is finally revealed, we took a closer look at everything the new SUV had on offer. The new model is not only impressive looking, but it also has the bite to go with its bark. Surprisingly, it had a lot of impressive features that its competitors don’t have, and here, we’ve compiled a list of all these features.

Upon launch, the 2020 Mahindra Thar will not only be the most-affordable SUV with 4WD on offer, but it will also be the only 4WD sub-4-metre SUV in the country. The 4WD system can switch between ‘2-high’ (two-wheel-drive), ‘4-high’, and ‘4-low’.

In ‘2-high’, the system disconnects the front axle completely, turning this vehicle into RWD to improving fuel economy. In ‘4-high’ mode, the torque gets multiplied 2.48 times, enabling the Thar to climb over any obstacle. 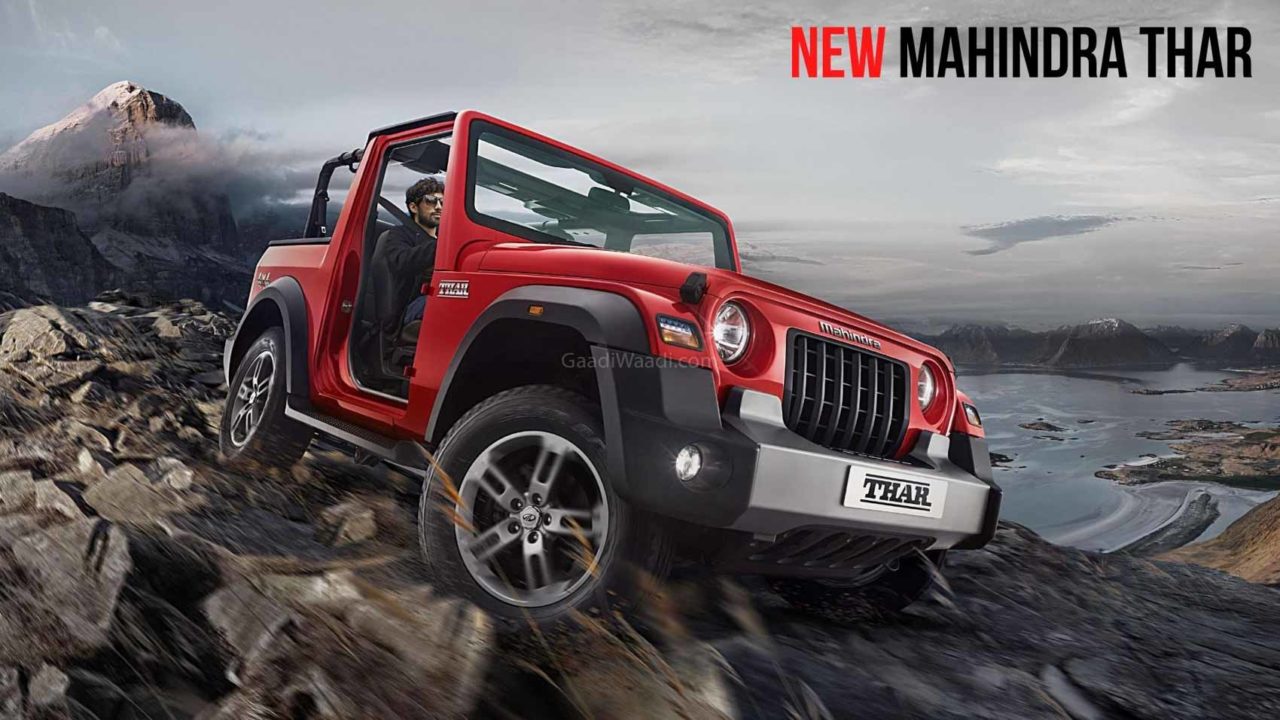 The Thar is designed to be the best budget-off-roader in our market, as evident by its 41.8˚ approach angle, 36.8˚ departure angle, and 27˚ breakover angle. The SUV offers a ground clearance of 226mm and can wade through water 650mm deep. The new-generation Thar offers 33 per cent higher traction than the previous-model, helped by the extremely torquey engines. It also gets a mechanical locking differential at the rear, and brake locking differentials at both the axes.

The 2020 Mahindra Thar also gets an integrated roll-cage, with 3-point seatbelts for the rear passengers (with the forward-facing seats). It adds stiffness to the already strong chassis, thus enhancing the off-road capability even further. Also, in the convertible version, the roll-cage is exposed, which adds to the car’s visual appeal. 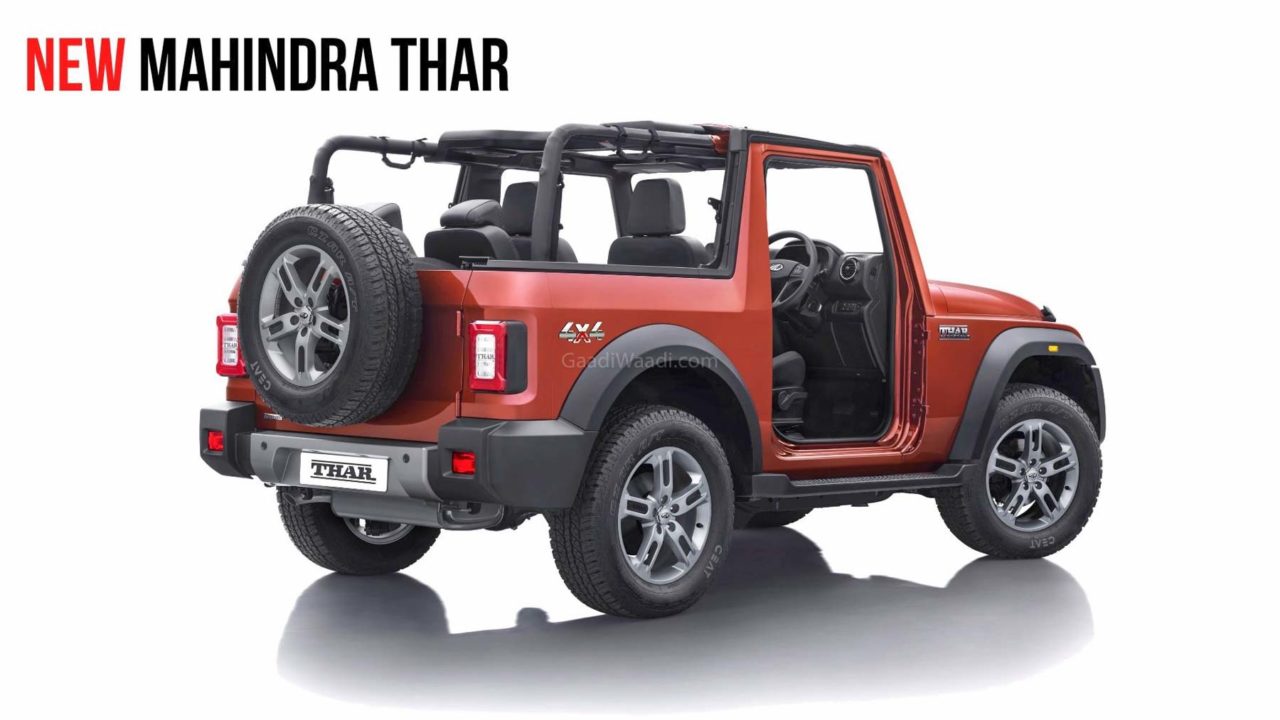 Just like the Jeep Wrangler and the New Ford Bronco, Mahindra Thar also offers a set of removable doors. To undo the doors, customers need to remove only three fasteners and detach a quick-remove electrical coupler, which is an easy single-person job.

4. Biggest Engine Options In Its Class

The 2020 Mahindra Thar can be bought with either of two engines – a 2.0-litre ‘mStallion’ petrol engine, or a 2.2-litre ‘mHawk’ diesel engine. The former is a detuned version of the 2.0L engine Mahindra showcased at the 2020 Auto Expo, capable of generating 150 hp and 320 Nm, while the latter is a detuned version of the XUV500’s engine, and produces 130 hp and 320 Nm. Both the engines are available with two transmission options – a 6-speed manual or a 6-speed automatic. 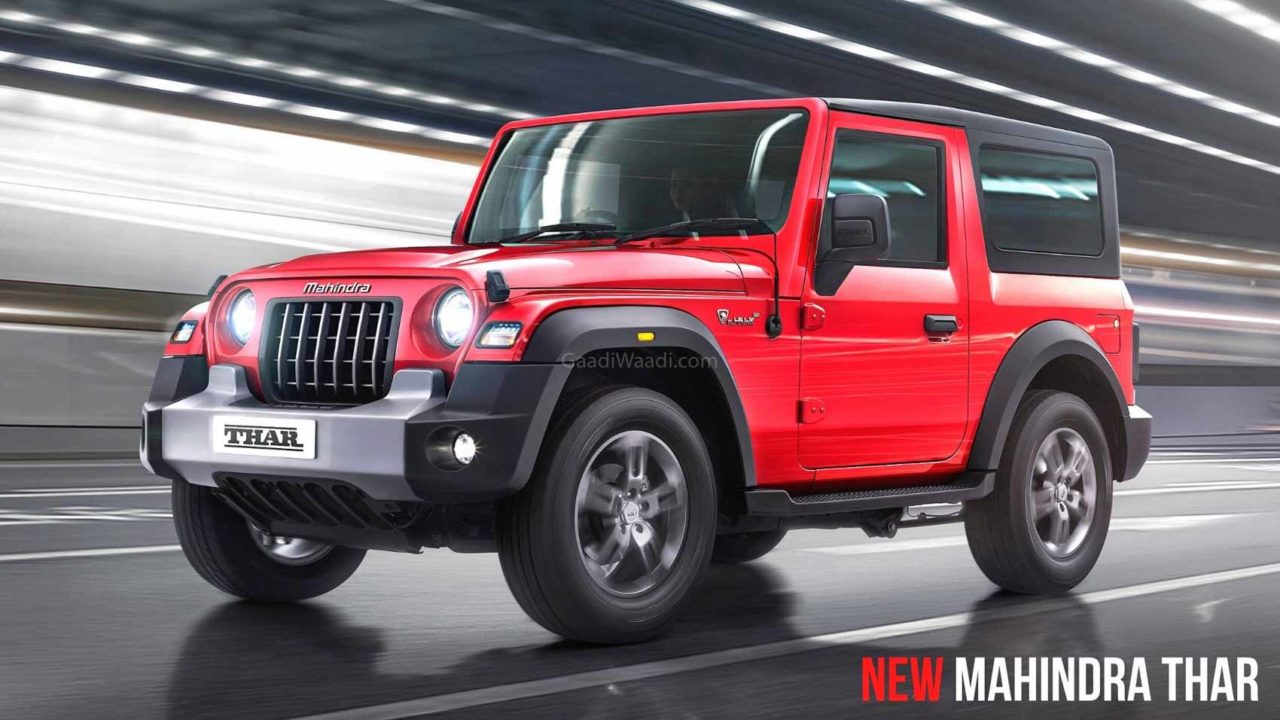 The new Thar is available in three body styles – hard-top, soft-top, and convertible. As the names suggest, the hard-top version gets a fixed roof, while the soft-top gets a cloth-covering for the roof and rear-hindquarters. On the convertible model, you get a folding soft-top roof, which can easily be pulled back for an open-air driving experience.

The speakers have been mounted on the ceiling, to allow the passengers to enjoy their music even with the doors removed! 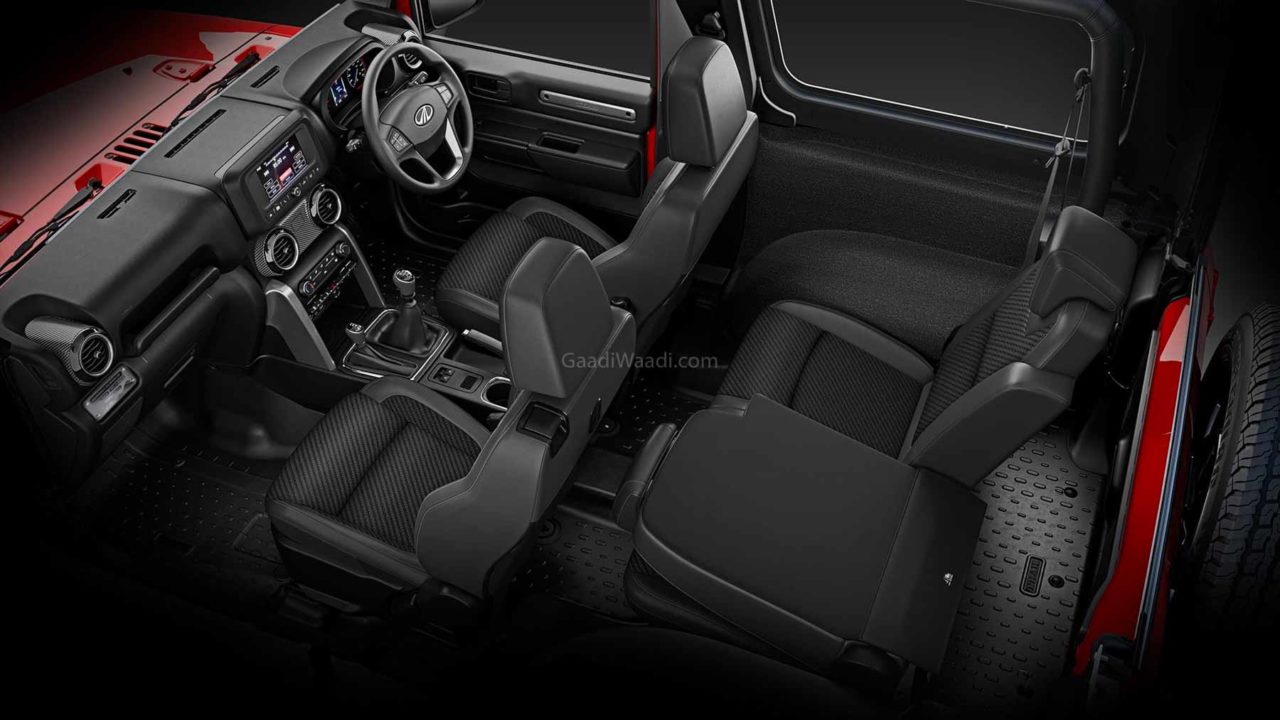 Customers can also choose either two forward-facing rear seats, or a pair of inward-facing benches (like the previous-generation model). With the former, you get a seating capacity of four people, while the latter can seat up to six people (two in the front row, and two on either bench).

The second-gen Thar gets a first-in-class adventure statistics display, which showcases information like gear position, engine speed, roll and pitch angles, power, torque, 4X4 system power flow, and compass reading. It also gets a G-meter on-board, for added performance monitoring. Also, off-road enthusiasts can use the Adventure Connect feature to share their exploits, reach out to Mahindra Adventure team, and keep tabs on and participate in the upcoming events. 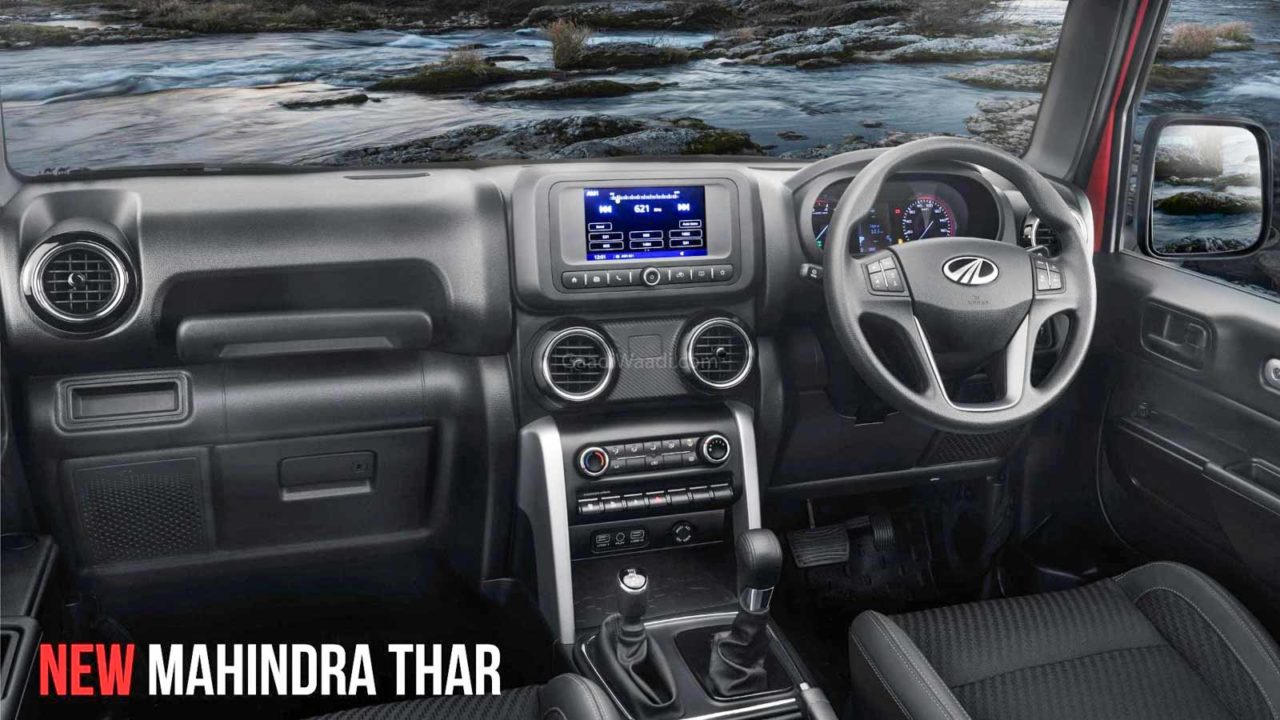 The all-new Mahindra Thar also gets IP54 dust and water protection for the switches, steering-mounted controls, infotainment system, and power windows, which is quite important for a serious off-roader. This ensures that when you explore the wilderness, your SUV isn’t fazed from being exposed to the elements, especially when the doors are removed.

Another benefit of being water-resistant is easy cleaning for the cabin; simply take a garden hose and spray water all over, cleaning off the dirt and grime. The all-weather floor mats are also washable, and the floor also features drain plugs, which can be opened to allow all the water to simply drip away, thus adding even more convenience to the cleaning process.