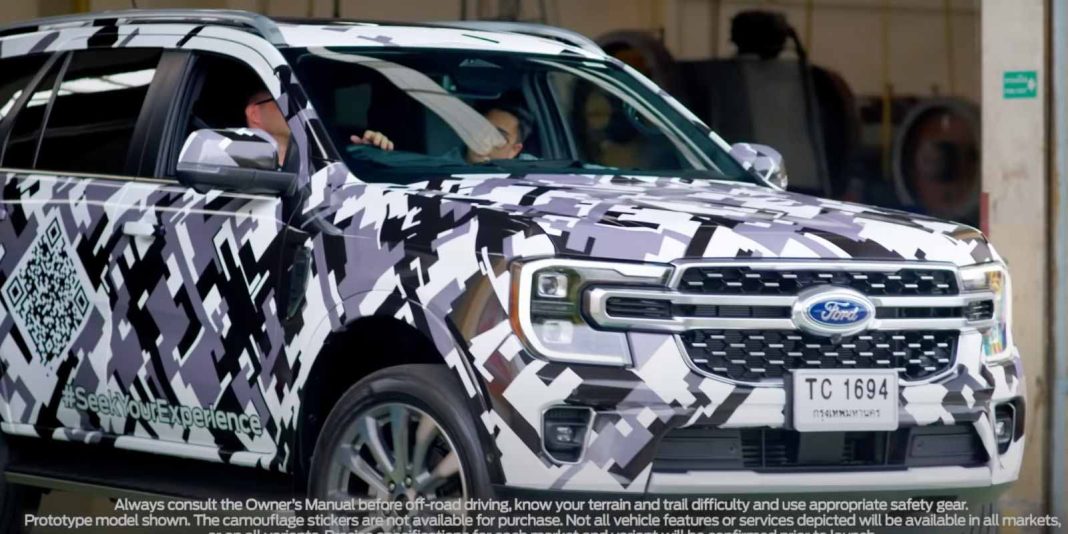 Ford’s Australia division has released the official teaser video of the new generation Endeavour (Everest) which has been spotted testing several times already Down Under and also in Thailand more recently. The video said Ford Australia is getting the all-new Ford Everest adventure ready for customers and it was doing some trail duties and water splashing.

Signifying that the Endeavour has entered the final phase of testing, the prototype wore “mountain peak” inspired camouflage and most of the exterior details can be clearly seen. It is expected to make its global debut sometime in the early parts of 2022 before going on sale in the international markets and it could enter India in the near future via the CBU route.

The Ford Endeavour was the main competitor to the Toyota Fortuner until it was discontinued as the Blue Oval quit its domestic operations. The full-sized seven-seater SUV with off-road credentials continued to be one of the best sellers for the American manufacturer until it was here and it could be part of the brand’s plans to sell exclusive models in the coming years.

Back to the 2022 Ford Endeavour, it is based on the same platform as the latest Ranger and the design similarities can be noted as well. Up front, the SUV comprises redesigned headlamps, revised front bumper, strong shoulder lines, newly designed alloy wheels, tweaked bonnet and tailgate, updated LED tail lamps and rear bumper, and so on.

The interior is also subjected to a number of changes and it will get the latest SYNC tech with a large touchscreen infotainment system with Apple CarPlay and Android Auto compatibility, a possible all-digital instrument cluster, use of more premium surface materials, automatic climate control system, cruise control, steering wheel with mounted controls, restyled dashboard and centre console, etc.

The features list of the 2022 Ford Endeavour will get new additions pertaining to safety, connectivity, entertainment and assistive technologies. It is expected to be equipped with the same 2.0-litre diesel engine, paired with manual and automatic transmissions.