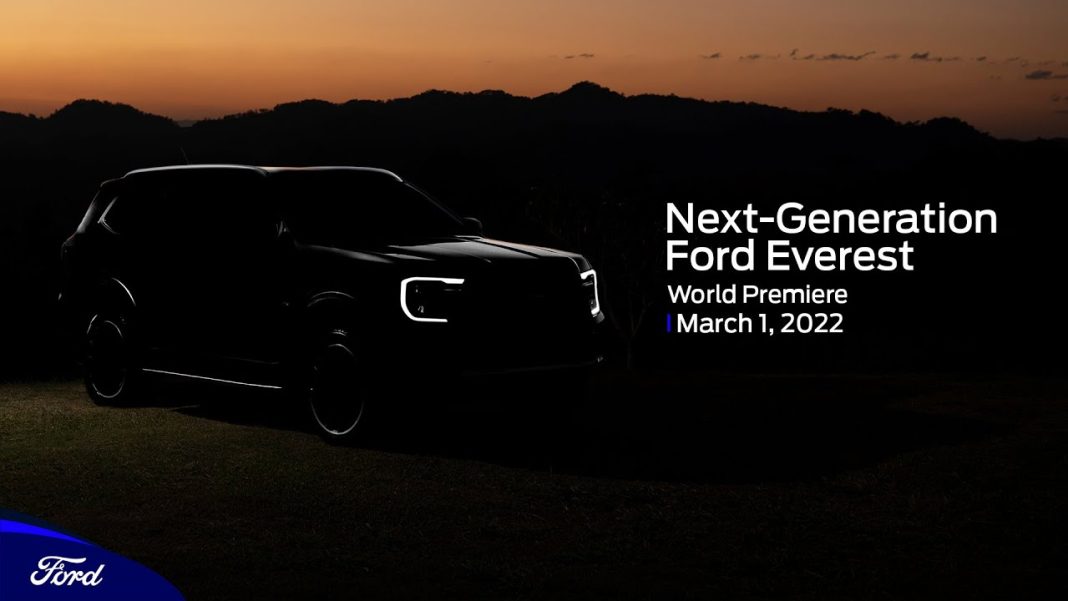 Following the release of the camouflaged prototype weeks ago, Ford’s Australia division has again teased the new generation Everest, which was on sale in India as Endeavour till last year. This time around the production-spec model was shown in different angles and colours while a glimpse of the new front fascia, body panels, wheels and rear could also be seen.

The Blue Oval will host the global premiere of the all-new model on March 1, 2022. The frontal styling is reminiscent of the latest Ranger pickup truck and it also takes inspiration from the F-150. The redesigned front grille houses the Ford badge and the air intakes have X-graphics as in the Ranger. The front bumper is also embellished in chrome and the fog lamp housings are new.

The Ford badging is grafted in a twin horizontal chrome strip while the grille inserts are also of chrome. A prominent C-shaped LED Daytime Running Light setup surrounds the sharper LED headlamps alongside the central air intake that is wider than before. The rear end is also redesigned with a new bumper and LED tail lamps, besides a tweaked bootlid.

The 2022 Ford Endeavour is based on the same platform as the latest Ranger and is expected to have structural enhancements and it could be re-engineered for improved handling characteristics and ride quality. The full-size SUV’s off-roading ability will more likely be stepped up as well courtesy of the introduction of new technologies.

As for the performance, the upcoming Endeavour will use a 3.0-litre V6 turbocharged diesel engine as the teaser showed a badge on the front fenders. It is expected to be paired with a ten-speed automatic transmission as standard, transferring power to all four wheels. Other possible powertrain options are a 2.3-litre EcoBoost petrol and a 2.0-litre four-cylinder turbocharged diesel mill.

A plug-in hybrid motor could also be on offer. The teaser also showed the grey roof rails, blue colour scheme and sunroof of the seven-seater SUV. On the inside, it will boast a new dashboard similar to the Ranger and a large 12-inch touchscreen infotainment system with SYNC4 connectivity will likely be available alongside the use of more premium materials.

It will compete against Toyota Fortuner, Isuzu MU-X, MG Gloster, Mitsubishi Pajero Sport and Nissan X-Terra in the international markets. India may get the new-gen Endeavour through the CBU route but no official confirmation has been made yet as the brand quit its domestic operations last year.