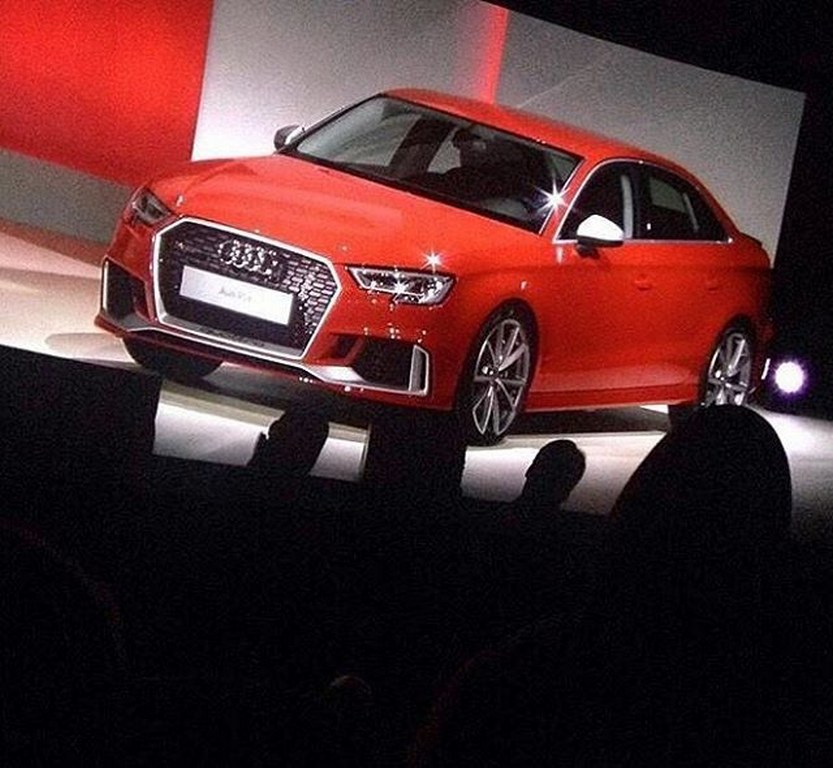 New Audi RS3 sedan leaked online; could get an uprated 2.5-litre turbo engine and is expected to be launched in US late 2017

The only Audi RS model currently running on US soil is the RS7 Sportback as the German luxury car maker decided to end production of the RS5 coupe and RS4 sedan. Surprisingly last year, the four rings came up with the shooting brake body-styled RS7 Sportback for India at a price of Rs. 1.4 crore and within a month launched the performance version of A6 Estate, RS6 Avant, for Rs. 1.35 crore (both ex-showroom prices).

The speculations of a sedan version of the RS3 have largely been in the shadows but recent reports suggest that Audi has given the green light finally for RS to arrive at the US market. It will be followed by a slew of other RS-branded models which could mean that the RS treated Q5 and Q7 flagship SUVs with plenty of space and flaunting looks, the buyers in the States have affinity towards. Focussing on upmarket young buyers, Audi could also introduce the RS4 Avant, new generation TT RS sportscar and RS6 Avant. Rumours predicted that at the Audi Summit for the American subsidiary of the company, the chief personnel affirmed that the new RS3 sedan will be arriving across the Atlantic.

During that event, several online media outlets claimed that the new RS3 sedan had been put on display with the supposed evidence of three leaked images. The front fascia of the pictures have revealed that it’s the Audi A3 based RS3 sedan with its sharper styling and neatly co-ordinated LED headlamp cluster.

Revisions have been made to the front grille with inspirations taken from the A3 Clubsport Quattro Concept with sleeker front fenders and wing mirrors. It is more likely to be powered by the inline five-cylinder engine that is found under the bonnet of the current RS3 Sportback. Displacing 2,500 cc the powertrain could be tweaked to produce 400 hp, at an increase of 40 hp over the standard RS3 with a slight hike in torque figure from 465 Nm.

Power is transferred to all the four wheels through the proven Quattro AWD system whilst transmission duties will be dealt by the seven-speed dual clutch S-Tronic automatic gearbox. It could reach the showrooms towards the end of next year as a 2018 MY model.
Source: WorldcarFans