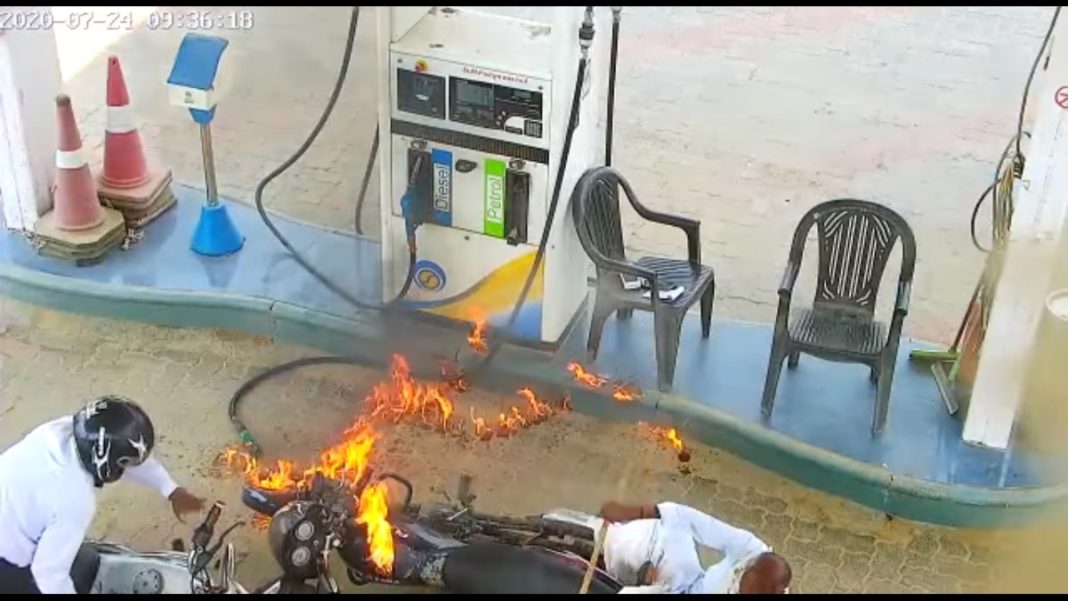 Recently, a video of a motorcycle spontaneously combusting while filling-up at a petrol pump has gone viral on the internet

Modern amenities and technology have permeated all walks of our life, and has become inseparable from it. While it has mostly improved our life for the better, there are times when we are reminded of the dangers of modern life. Here, we have a video that shows a motorcycle catching fire while filling-up at a petrol pump.

The incident took place in Jhunjhunu, Rajasthan, on 24th July 2020, at 9:36 AM. In the video, we see a man on a Bajaj Platina, with an older man seated at the back. From this clip, it doesn’t seem like they both were wearing helmets and masks, although the young man did cover his face with a scarf. The petrol pump employees are also not wearing a mask, which is quite hazardous, as the staff members usually come in close contact with several people every day.

That said, the potential threat of contracting COVID-19 is overshadowing by the actual threat of being burnt alive. The rider pulled something out of his pocket, and in but a flash of a second, flames engulfed the motorcycle. The reason for the fire is yet unknown. The man, who had jumped out of the bike at this point, had fire on his palms and his trousers as well. His pillion, being old, falls along with the motorcycle, and is pulled away by the rider just a few moments later. There was another duo on a motorcycle nearby, who managed to retreat safely.

After the initial shock of the sudden fire wore down, the petrol pump employees quickly jumped into action. One of them grabbed the nozzle and tried to cut the fuel flow, but to no avail. Another one grabbed a fire extinguisher off-screen and managed to quell the fire. Nobody was seriously injured and a big catastrophe was averted, thanks to the vigilance of the staff.

While such incidents aren’t daily occurrences, it should be remembered that this can happen anywhere and to anyone. Petrol is highly volatile and flammable, so we should always be careful when at a fuel station. Always shut your engine off while filling up, and do not smoke (or burn anything) near a pump. Even friction with clothes, especially woollen and polyester, could cause a spark.

It should be noted that using a mobile phone at a petrol pump is also not advised, stating that the electromagnetic waves might be a potential fire-starter, but considering how digital payments are the norm these days, not using your phone seems unavoidable. Still, caution is advised.