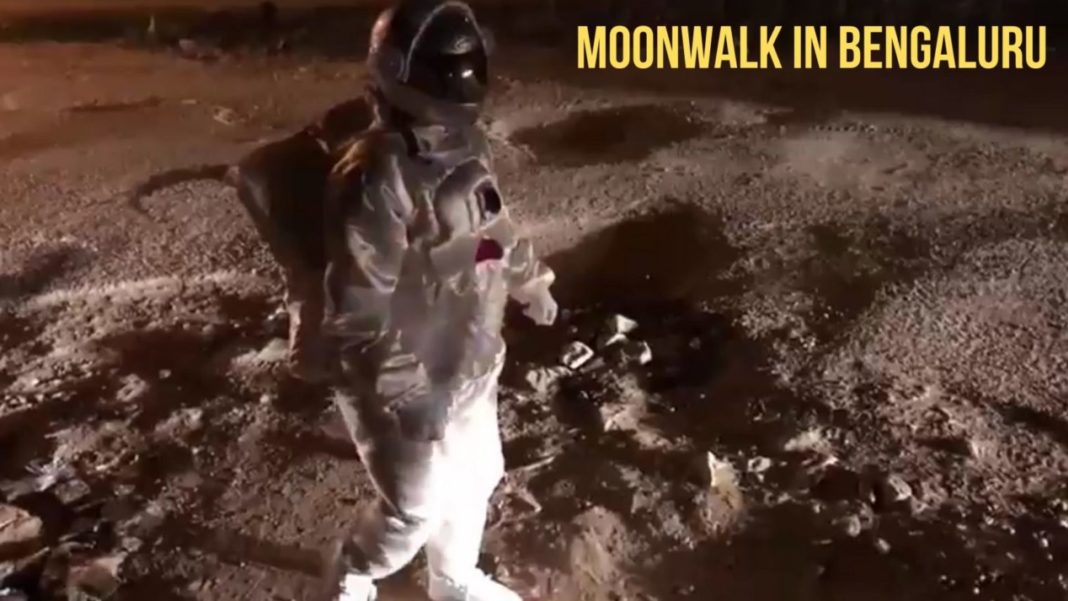 Easily among the most modern cities in the country, Bangalore is known for being an IT hub and home to millions of techies who move to this city in search of great job opportunities. The metropolitan city really has a lot to offer to people from all spheres of life. Good roads, however, aren’t part of the package.

Until recently, Bangalore was in highlight for a long period of time for the crackdown on illegal motorcycle exhausts. The police went the extra mile to not only nab the offenders and fine them, but even discourage others from using illegal exhausts by brazen show of ruthlessness by running a road-roller over exhaust pipes.

In a new development, some citizens of the city have come up with a pretty creative way to protest against Bruhat Bengaluru Mahanagara Palike (BBMP) for ill maintenance of road. A video that goes viral shows a protestor in an astronaut suit and enacting a moonwalk on the totally broken stretch of tarmac.

Basically, the protestor has compared the road conditions to the rough and uneven lunar surface. While this is a rather funny way to protest, it completely drives home the point by clearly highlighting the state of affairs. BBMP is yet to issue any kind of statement on this unique protest against them.

However, what we’re sure of is that the video completely showcases the carelessness of the authorities. Broken roads are one of the biggest nuisances today. What’s also important to highlight here is that the problem of bad roads isn’t restricted to Bangalore. The situation is pretty much the same in most modern Indian cities.

Broken roads and potholes are some of the biggest causes of two-wheeler accidents. Other than the high danger they pose to the road users, they also cause higher-than-usual wear-and-tear of vehicles, thereby leading to increased maintenance costs in the long run. We really wish that the authorities finally take some action and repair all roads at the earliest.