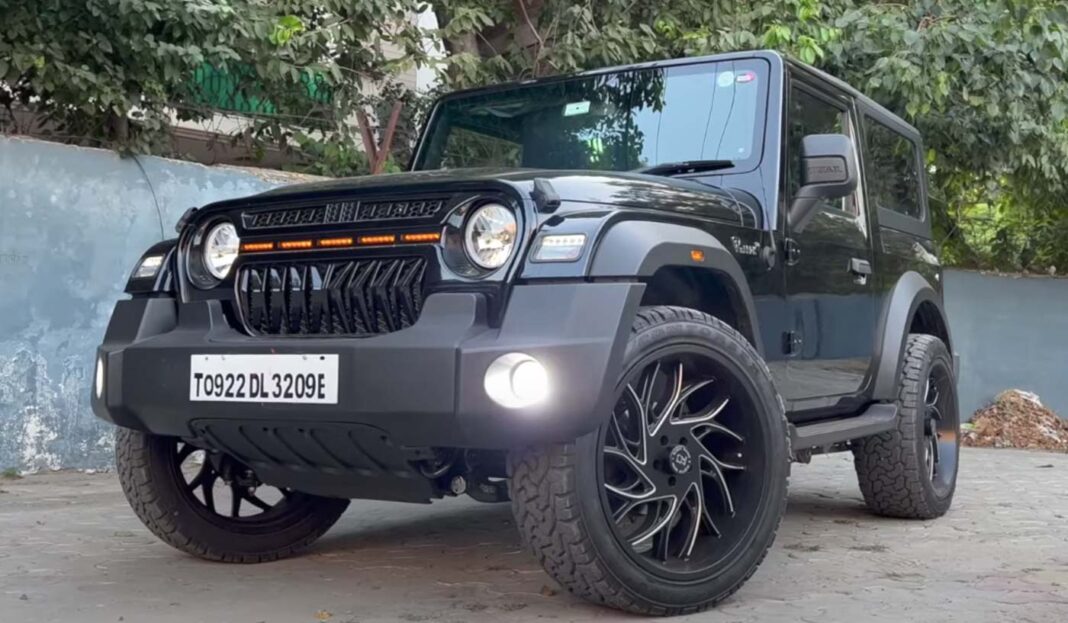 Its been almost two years since the new Mahindra Thar made its Indian debut and the SUV still continues to have a similar trend and demand in the market. The new Thar not only boasts a better cabin and a more powerful powertrain, but is also one of the most capable SUVs in the market today.

Here is one such Thar that has been modified by the owner and has modifications worth Rs 5.5 lakh. For starters, this new Mahindra Thar rides on newly R22 alloy wheels with special off-road tyres that give it better capabilities and stronger looks. In addition to this, it also gets a new font grille with integrated indicator lamps and new LED fog lights.

While the new tyres do look better and offer an improved stance, the fuel economy has taken a major hit while the suspension might also get affected in the longer run. The owner shared that these new wheels and tyres cost around Rs 3.5 lakh and have been imported into the country.

Other modifications include a new audio setup, new seat covers, and premium foot mats. The owner also shared that he further plans to get more modifications and accessories installed in his SUV. He also reported that the SUV delivers a real-life fuel economy of around 11-12 kmpl while he is extremely happy and satisfied with the AC performance and the performance.

The Mahindra Thar is currently being offered with two powertrain options that include a 2.2L diesel and 2.0L petrol engine. The diesel churns out a peak power output of 130 bhp and 300 Nm of maximum torque while the petrol engine on the other hand delivers maximum power and torque of 150 bhp and 320 Nm respectively.

Both these engines are offered with automatic as well as manual gearbox options while a 4X4 transfer case is offered as a standard part of the package. The new Thar takes on the rivals like the newly introduced Force Gurkha 4X4.