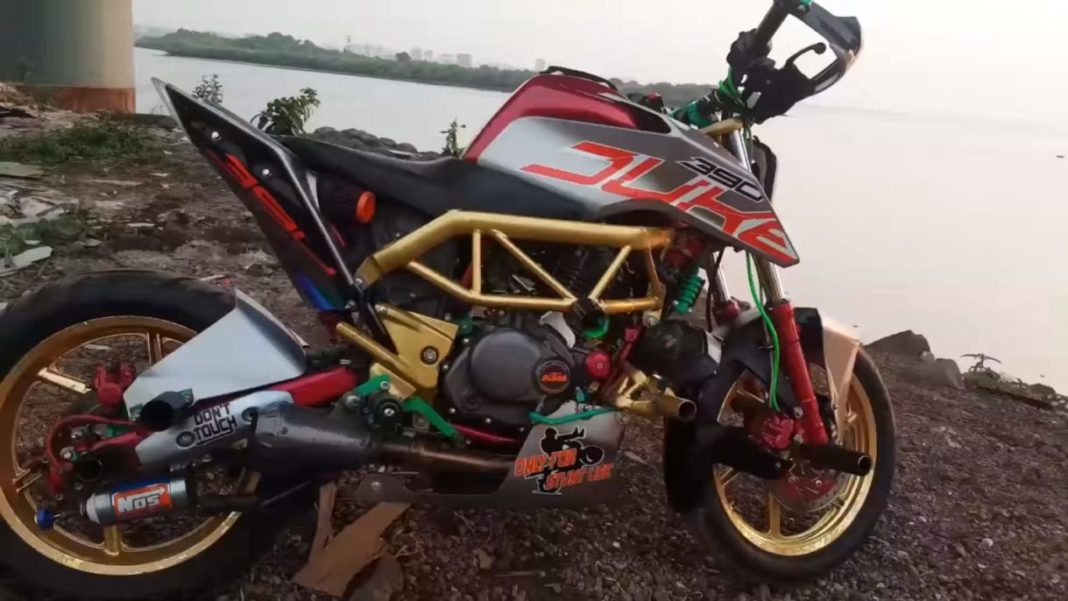 Many bike owners prefer to give their motorcycle a new identity by modifying it. Having a modified motorcycle is fast becoming a huge trend in India. We have very often seen people modifying their Royal Enfield motorcycles into something more attractive. Some people even make their Bajaj Pulsar 150 look like a Suzuki Hayabusa. This time, however, we have a modified Bajaj Pulsar 220 that looks like a KTM Duke 390.

The modified Bajaj Pulsar 220 seen in the video gets many parts from the KTM 390 Duke, which includes the fuel tank, the fuel tank extensions, tailpiece, handlebars and the front fender. The custom bike also gets the Duke’s knuckle guards and has a trellis frame mounted onto the original motorcycle’s chassis.

There is a golden paintwork on the handlebar, alloy wheels, and the trellis frame have been given a golden paint job. The telescopic forks, which have been carried over from the earlier model, are finished in an orange paint. The tail section is high-set, which makes this motorcycle a no-no for the pillion. The headlamp comes from the KTM 250 Duke.

The handlebar, alloy wheels and the trellis frame receive golden paint treatment, while the telescopic forks receive an orange paint scheme. The KTM 390 Duke’s tail section is steeply raked, which makes the customised Bajaj Pulsar 220 a strict single seater. The headlight cluster is borrowed from the 250 Duke. While the LED DRLs have been retained, the cluster carries twin LED lights.

The stock speedometer is now placed on the right side of the engine while the modified Bajaj Pulsar 220 also gets frame sliders bolted onto the trellis frame. The motorcycle also sports a free flow air filter and a full exhaust system.

Other than all this, the modified Bajaj Pulsar 220 has a custom swingarm and a NOS cylinder placed just below it on the right side. While it’s not clear if this is a functional modification or is there just to make the motorcycle look cooler. The original engine has been carried over. While the front suspension is stock, the rear gets a monoshock.

Originally, the Bajaj Pulsar 220 is powered by a 220cc, single-cylinder, oil-cooled engine that produces 21 bhp of maximum power and 19.12 of peak torque. It comes mated to a five-speed manual transmission.