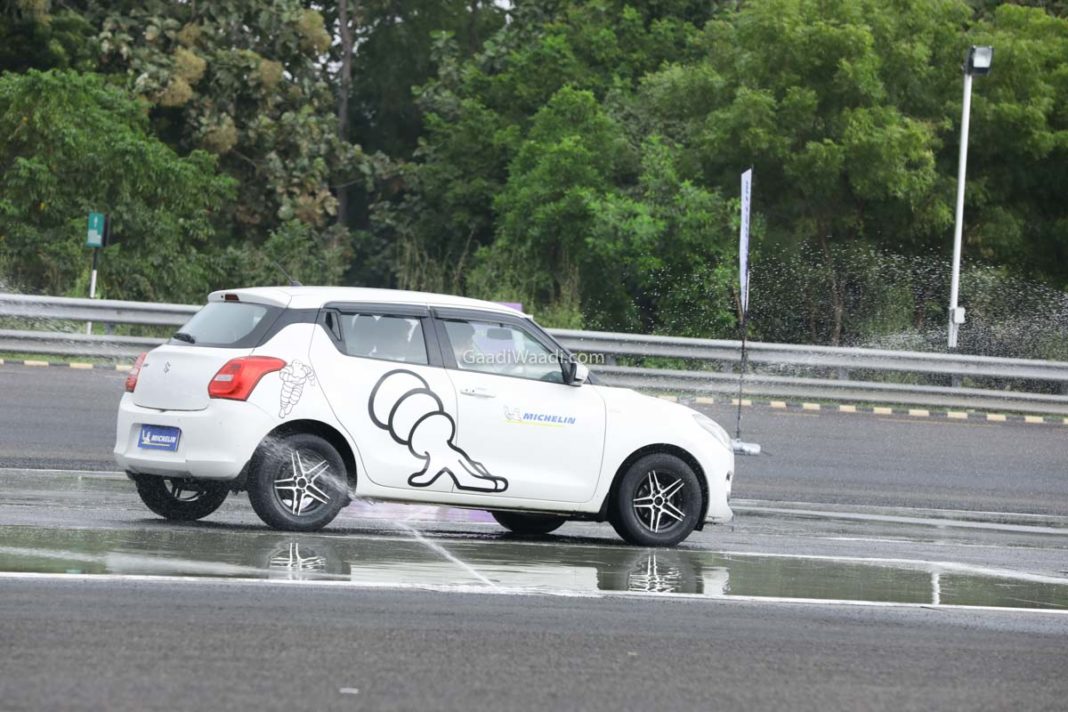 If you want to just fit and forget, the ‘forever young’ Michelin Energy XM2+ could be amongst the best options

We recently got to test a set of Energy XM2+ tyres which had reached their end of life against a competitor (which happened to be the Bridgestone B290) at the WABCO Proving Ground in Chennai. Both set of tyres were equipped on two identical diesel-powered Maruti Suzuki Swifts, manufactured in the same month and year.

Both the set of tyres had their replacement markers visible, while were filled up with the same tyre pressure. The test consisted of emergency braking in extremely wet conditions; which is something beyond many tyre companies would go to prove their product’s capability.

We drove the car up to the speed of 100 kmph from standstill, and then braked as hard as we could on the wet asphalt. To be fair and notice the difference ourselves, we were asked to complete two rounds with the Michelin Energy XM2+, and two with the competitor tyres. Fortunately for us, experts from Applus IDIADA India were there while performing the test to guide us through. 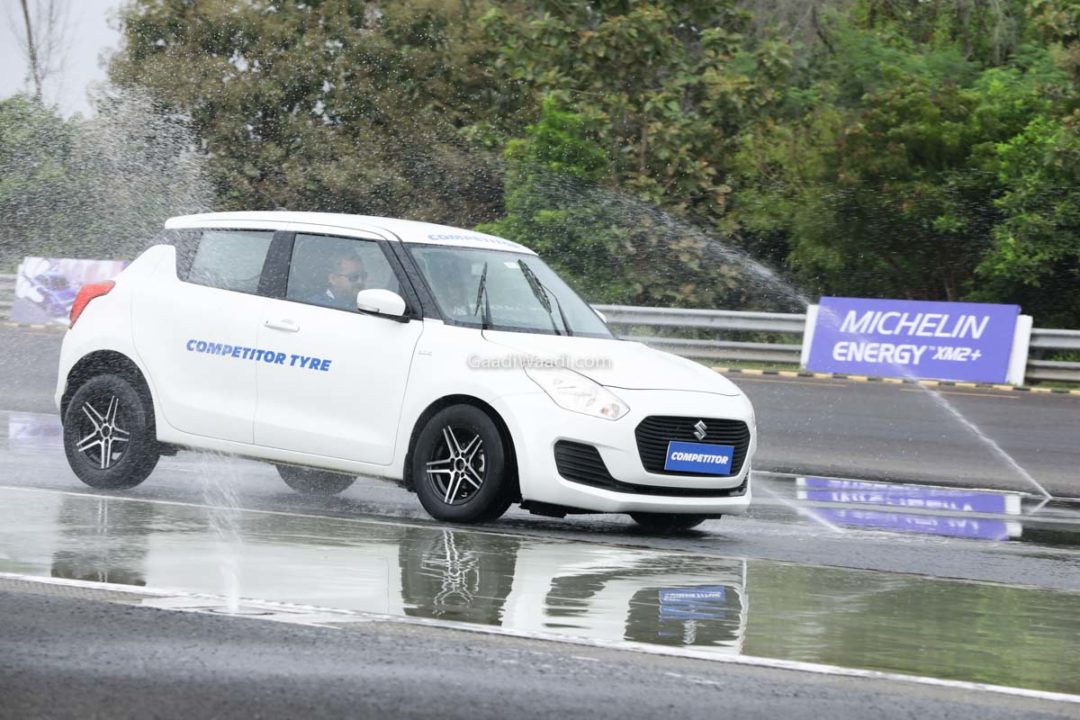 We hit the brakes at the same point which was marked by cones on either side. The end result? While the competitor tyres jittered the brake pedals and made the ABS work harder, the Swift with the worn-out Energy XM2+ tyres was comparatively easier to control. The car felt stable while coming to a halt, and stopped at a shorter braking distance than the one running on the competitor tyres.

The Energy XM2+ is the successor to the Energy XM2, which costs the same as the latter, while improving on performance. The new XM2+ tyre is claimed to offer improved mileage, as well as shorter stopping distance than its competitors. 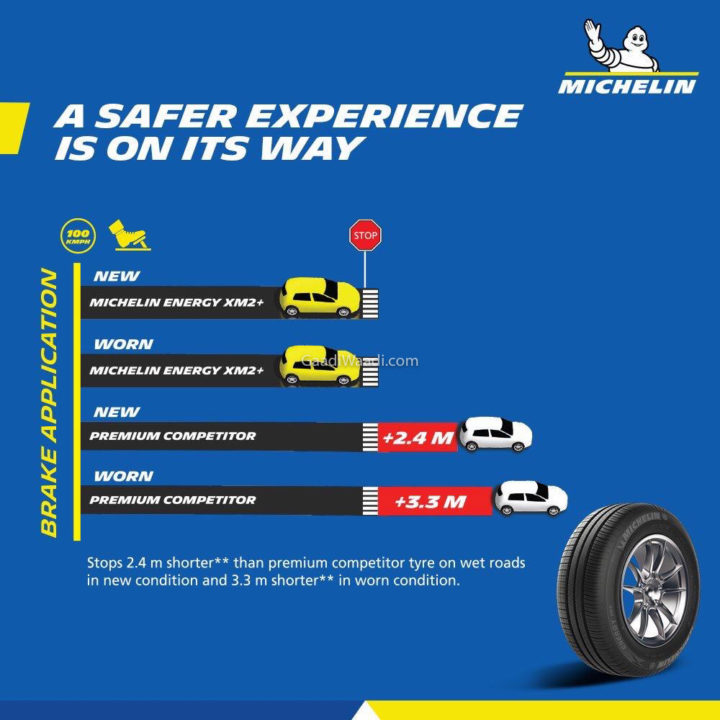 Touted as the ‘forever new tyre’, the XM2+ is claimed by Michelin to have a life of 1,25,000 km, which is around the average duration we own and drive a car in India. The tyre also lasts 29% longer than its competitors. Not only does the tyre have a longer life, it also performs better, even when it is worn out and deemed unfit for use.

Fitted on the same car, the Michelin XM2+ brakes shorter than its competitors by 2.4 metres. And when worn out, the XM2+ stops at a commendable 3.3 metres less than its direct competitor. As far as fuel efficiency is concerned, the tyre will sport a ‘Green X’ label that “guarantees a level of energy efficiency among the highest in the market and reduced CO2 emission while maintaining all the legendary Michelin advantages of long wear, safety, and other performances.” 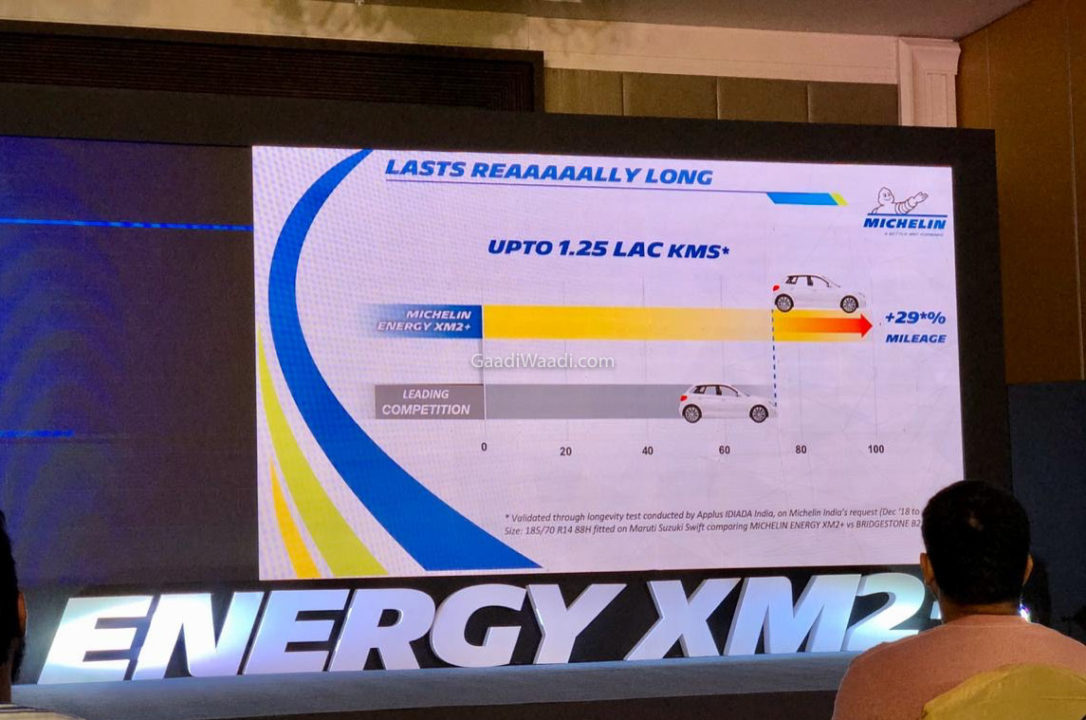 Michelin also claimed that the tyre will be made available in 30 different sizes next year, ranging from 12 inches to 16 inches in diameter. Hence, the Energy XM2+ can be equipped on any form of car including hatchbacks, sedans, SUVs and MPVs. The tyre costs upward of Rs 5,090 and for now, is only available in eight sizes with across two rim sizes – 15 inches and 16 inches. The new Energy XM2+ tyre can be purchased through any Michelin dealership across the country.