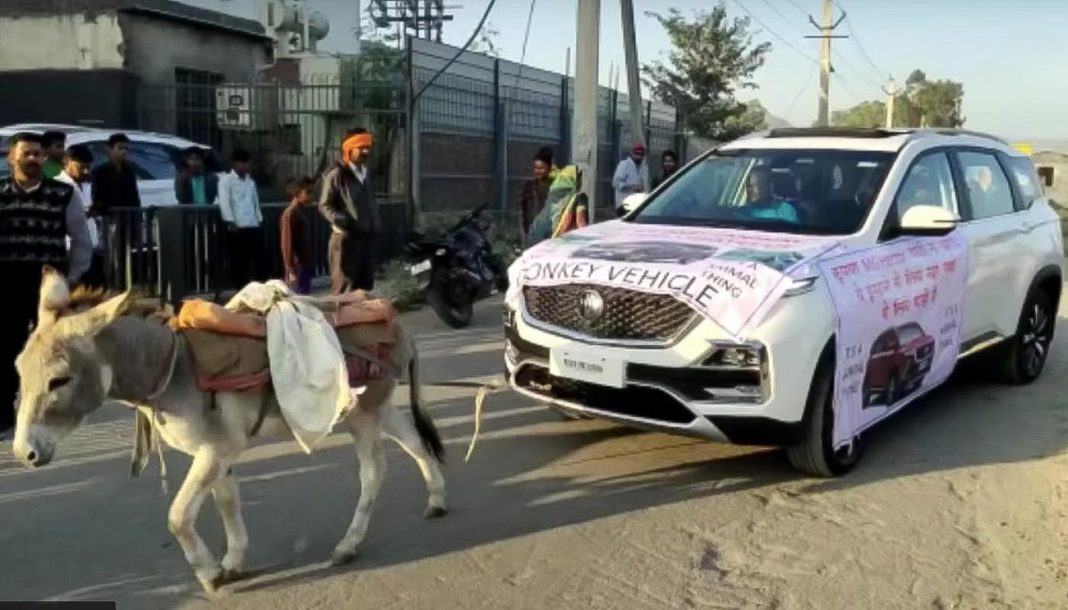 MG Motor has initiated action against the owner of a Hector, who put up defamatory slogans and tied a donkey to his car

A video of an angry MG Hector owner was uploaded on YouTube recently, which shows a white coloured Hector bearing banners with slogans like “Donkey Vehicle”; “It’s Only Animal To Feel Grateful”; and “It’s An Animal Thing”. Not only this, a donkey was tied to the car which then pulled the car. The video was uploaded by a YouTuber called Arun Panwar on December 3, and has been already viewed over 6.3 lakh times in just 4 days.

The owner of the Hector, Mr. Vishal Pancholi from Udaipur, in the video alleges that his car’s clutch had some problem for which he went to the company. However, the MG officials did not fix the problem and blamed it on him for “driving the car in second gear in traffic”.

Pancholi also claims that the company officials threatened him while refuting his claims. However, the British manufacturer has denied the allegations, and officials for the carmaker said that they took all the necessary measures to resolve Pancholi’s concern.

MG Motor India’s official Facebook handle while replying on a post related to the video, commented, “Despite MG’s wholesome efforts to completely satisfy the customer and resolve the matter, the customer has showcased his vested interest in the concern and is leveraging on MG’s customer-first approach to get an undue advantage.” The comment further read, “We have also initiated appropriate action with relevant authorities as the customer continues to hamper the brand’s highly held reputation.”

The MG Hector was launched in India in June this year and quickly made a name for itself in the market. With 3,239 units to its name, the Hector was one of the highest-selling mid-size SUVs in the country last month.

MG retails the Hector in India at a starting price of Rs 12.48 lakh (ex-showroom), which goes up to Rs 17.28 lakh (ex-showroom) for the top-end variant. The mid-size SUV competes against the likes of Hyundai Creta, Kia Seltos, Jeep Compass, Tata Harrier, Mahindra XUV500 among others.