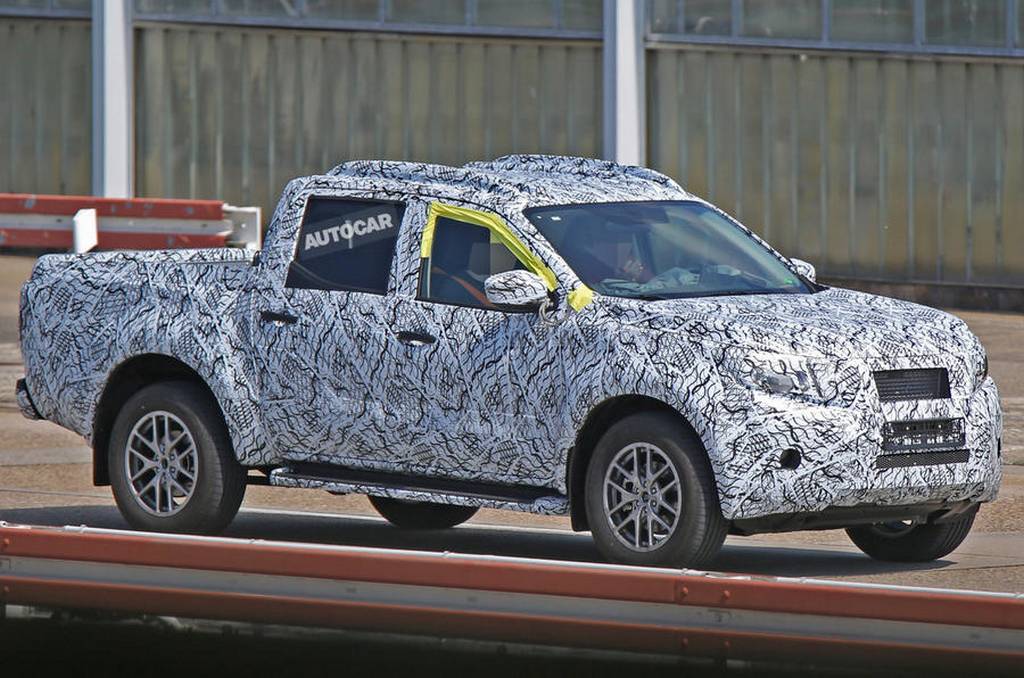 Spyshots of the Mercedes Benz’s first ever pickup truck have surfaced on the internet, thanks to the Autocaruk website. The pickup truck is more likely to be called as GLT and in case of turning out to be true, it will be the first time the letter T has been used in the naming system of the German luxury automaker – save it for the T80 Land Speed record car.

The Mercedes Benz GLT will herald a new journey for the fabled car maker as it lays the foundation for the work horses wearing three-pointed star badge. It is expected to make public appearance sometime next year before going on sale in foreign markets. The test mule was heavily disguised and therefore not many details came into existence but its overall silhouette did reveal some of the styling bits. The front fascia looked very much similar to the Nissan Navara NP300, understandably, as the Mercedes Benz GLT shares underpinnings with the Japanese pickup truck but for distinguishing purposes it had wider track. Despite being a pickup, Mercedes has put a lot of effort in bringing the model in-line with the design language of the current product range. The swept-upwards headlamps bore the character of the outfit’s existing SUV lineage when you carefully envisage beyond the camouflage. The other spotted feature was the roof bars and the interiors of the Merc GLT pickup will mostly resemble that of the Nissan Navara despite the cabin was completely sealed with camouflage. Considering the fact that the Mercedes pickup will be have upmarket image and plush interiors than the Nissan it’s based on, it will be priced significantly higher as well – the Navara is sold for £22,000 (Rs. 21.15 lakh) in the UK. It will be positioned in the high-end of the market scale besides the Volkswagen Amarok.

Further, the Autocar report said, due to the Renault-Nissan Alliance, the manufacturing of the GLT will happen alongside the pickup trucks from Renault and Nissan with split in production between Argentina plant of Renault and Barcelona facility of Nissan. It is expected to be sold in Australia, Europe, Latin America and North America.
Source: AutocarUK