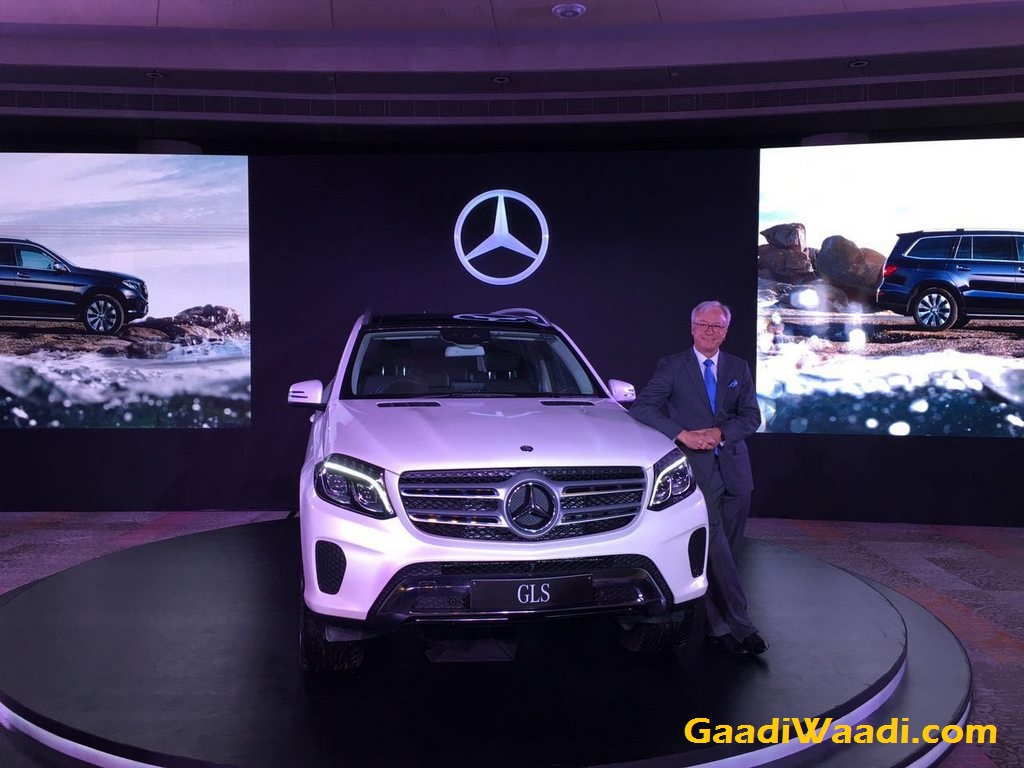 Mercedes-Benz has taken the wraps off its GLS 350d flagship SUV for the Indian luxury market today, which is considered as one of top 10 wanted markets for the model. Previously known as the GL-Class, the German automaker changed the name-badge to get the model in-line with the S-Class sedan it’s based on. The GLS emulates the S-Class’ sedan-like comfort while serving as a potent off-roader. Making world premiere at the 2015 Los Angeles Auto Show, the Merc GLS will be sold at a price tag of Rs. 80.38 lakh (ex-showroom, Pune).

The new GLS or facelifted GL-Class, comes with cosmetic updates inside and out. Proudly called as the ‘S-Class of SUVs’, the GLS has been adorned with a new front façade and a restyled rear end. To appease the growing legion of opulent customers, more techs and high-tech gizmos have been added as well. Concurrently, the local production of the GLS 350d has begun in the brand’s facility in Chakan. The headlamp cluster design is derived from the GLE and GLE Coupe and the SUV stance is accentuated by the power domes on the bonnet and prominent air dams. The SUV comes with sporty bigger bumpers at front and rear and new set of multi-beam headlights with LED Daytime Running Lights. The side profile remains largely similar as the outgoing model but the rear gets new layout for the LED tail lamps with the trademark night design and integrated trapezoidal chrome exhaust system. Other highlighting design elements are freshly designed ten-spoke 20-inch light alloy wheels, chrome detailed roof rails, beltline trim strip, underbody protection, side sill trim and attractive luggage compartment handle. The interior of the seven-seater is of S-Class’ standard even though not much has changed in terms of dashboard design. The GLS accommodates luggage space from 680 to 2,300 litres, a class-leading aspect. The most significant changes are the inclusion of a new three-spoke multifunctional nappa leather steering wheel with shift paddles and an eight-inch display atop the dash. The COMAND infotainment system with smartphone integration and Apple CarPlay, a redesigned instrument panel with semi integrated colour media display, new touchpad control for centre console are some of the other features offered in the GLS 350d. Powering the GLS 350d will be the 3.0-litre V6 diesel motor that produces 258 hp at 3,400 rpm and a massive 620 Nm of peak torque delivered between 1,600 and 2,400 rpm. The engine comes mated to a nine-speed 9G-Tronic automatic transmission tuned to give dynamic response and improved fuel economy due to the reduced torque converter slip.