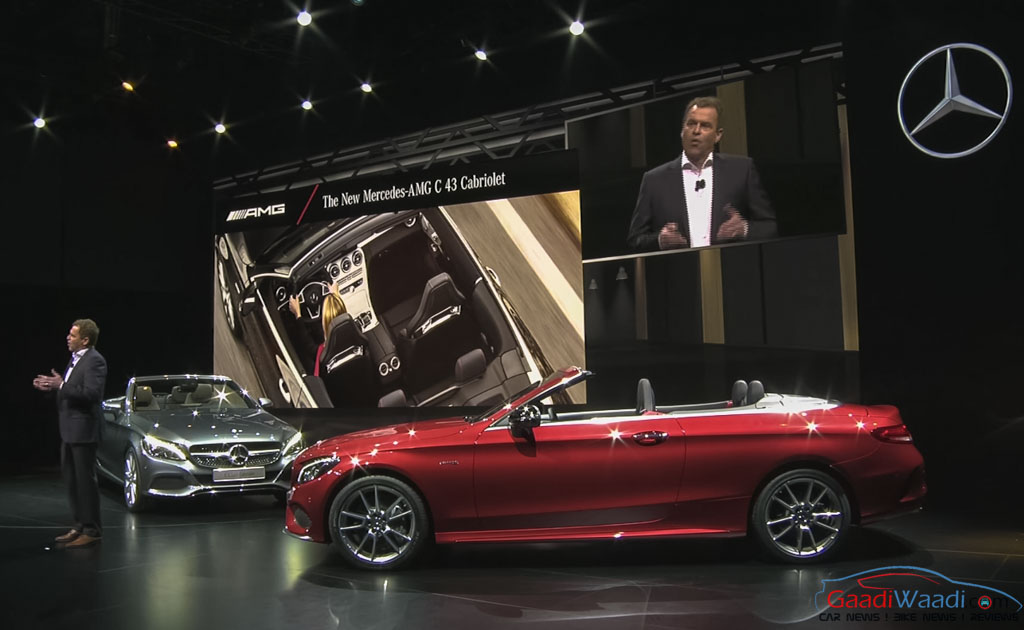 Mercedes-Benz C Class Cabriolet has been revealed at 2016 Geneva Motor Show; resembles C Class coupe in every way except for an open-top roof

Mercedes-Benz has officially unveiled the C Class Cabriolet online ahead of its much anticipated public premiere at the 2016 Geneva Motor Show. The new two-door cabriolet is the first open-top sedan to be based on the C Class and the company’s entry-level model, while it goes on sale by July 2016. The German luxury automaker has introduced a more powerful AMG version of the C Class Cabriolet, which is being christened as Mercedes-AMG C 43 4MATIC Cabriolet. Also, during the launch, Mercedes would also offer an Edition 1 for a limited time.

Speaking about the exterior styling, the C Class Cabriolet is based on the C Class coupe with almost identical dimensions. The front fascia flaunts a diamond radiator grille, LED headlamps, long bonnet and high beltline. The rear end boasts of flat LED tail lights and wide shoulders, which further accentuates its sporty character. 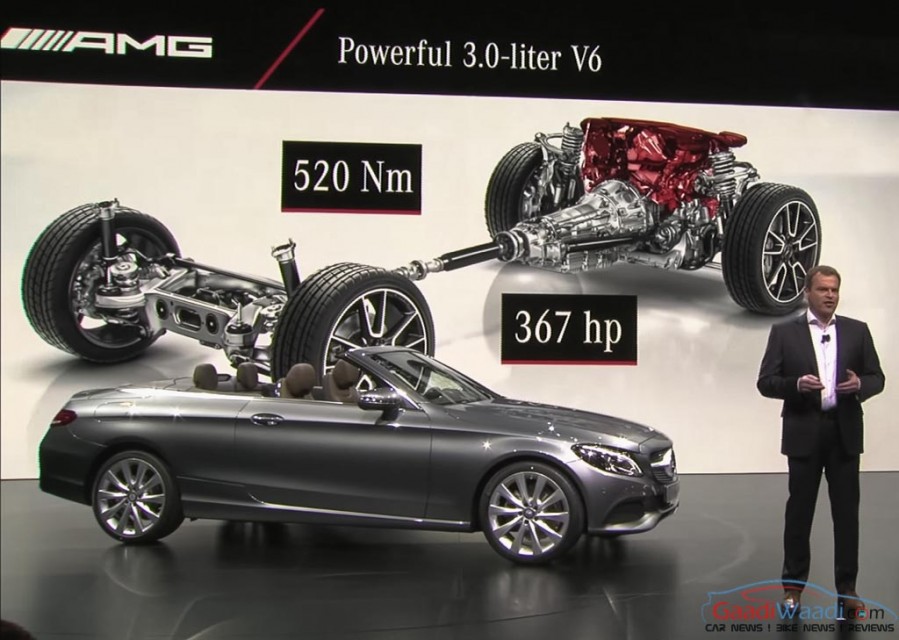 It has a boot space of 360 litres, which eventually gets reduced to 285 litres while the roof is in business. The suspensions have been lowered down by 15mm in the open-top model as compared to its sedan sibling. Mercedes-Benz C Class Cabriolet rides on 18-inch wheels, while having a cd (aerodynamic drag coefficient) value of just 0.28.

The fully automatic fabric roof, based on the S Class Cabriolet, is presented in black with the base variant, but it is available in dark brown, dark blue and dark red as option. It can be opened and closed in less than 20 seconds up to a speed of 50kmph. Coming to the interior cabin, it is based on the standard C Class sedan. The sports seats with side bolsters and organically integrated head restraints are sourced from the coupe sibling. 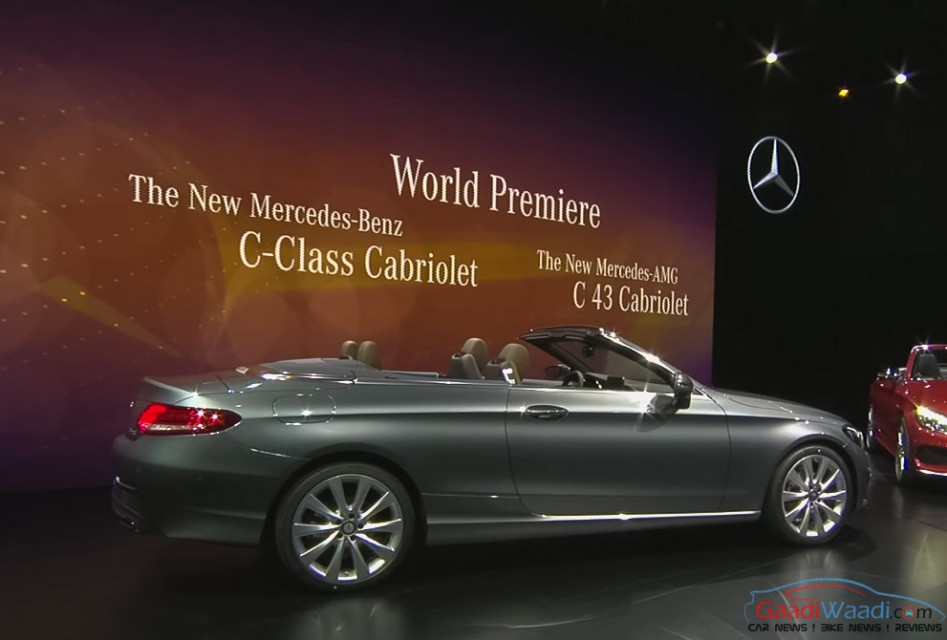 The rear seats are individual seats and come with 50:50 split feature. As for the AMG C 43 4MATIC Cabriolet, it gets the multi-function sports steering wheel in black leather with flattened bottom section and red contrasting stitching. The C Class Cabriolet is available in 13 upholstery options, seven trim variants, four soft-top colors, and twelve paint finishes.

Mechanically, the C Class Cabrio would be available in both petrol and diesel guises. There would be a total of 6 petrol engines on offer, starting from the 1.6L 4-cylinder motor in the C 180 with 156bhp of top power to the 3.0L 6-cylinder engine in the Mercedes-AMG C 43 4MATIC Cabriolet with 367bhp of highest power. The engines would be linked to a new 9G-TRONIC automatic transmission. 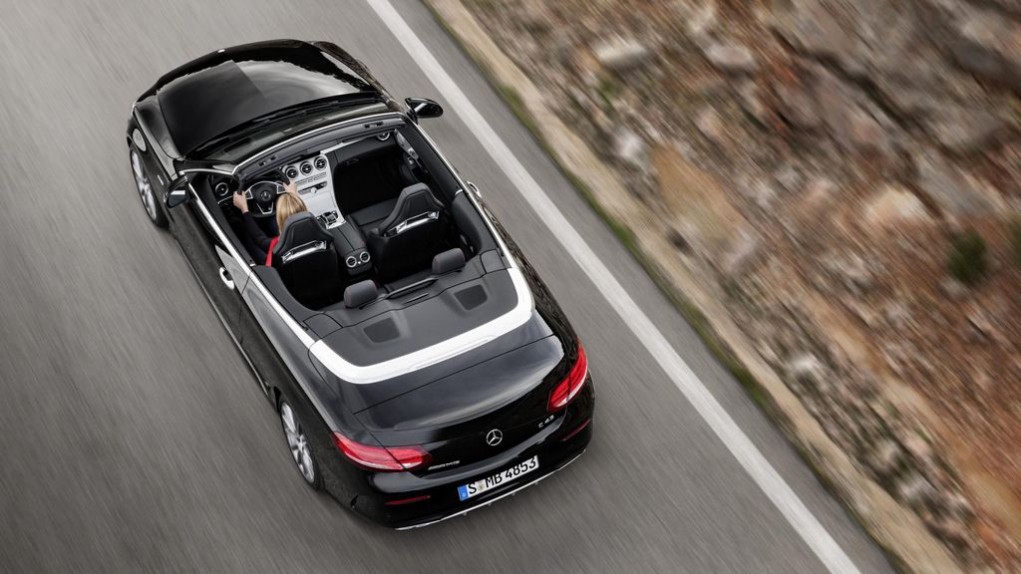 The diesel variants would be introduced with a 2143cc 4-cylinder engine which would develop two power outputs of 170bhp and 204bhp. The same 9G-TRONIC automatic transmission would be at the helm of affairs, while 4MATIC all-wheel drive would be available as optional. For those wondering, there would be front and pelvis airbags for driver and front passenger with a driver’s side knee airbag as standard safety features.