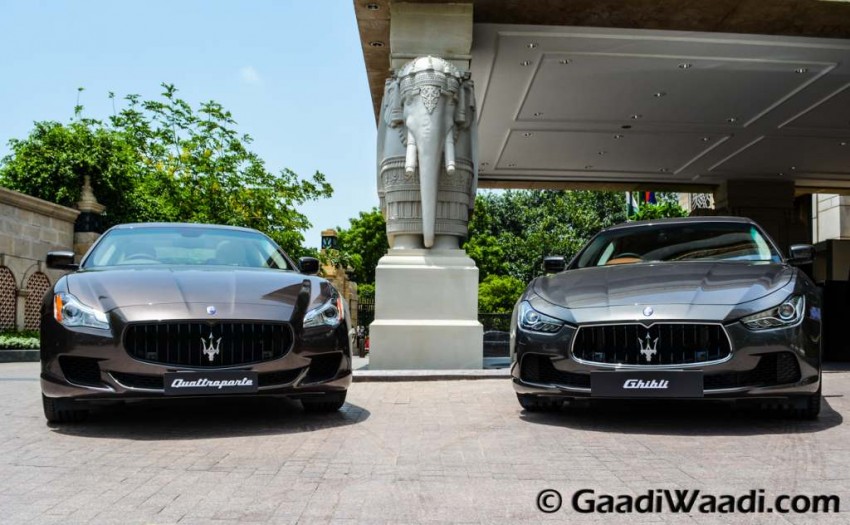 Maserati Comes Back To India, launches all its model in diesel and V8 powered petrol engines

Treat yourself with Italian Lunch today, Maserati has finally come to India. The brand has launched all of products in the country today. The Italian marquee was in India some time back, but due to issues with dealerships it has decided to come back on its own. The trident emblem brand has said that they will be opening three dealerships in key cities through the country.

The dealerships are all set to open very soon in Mumbai, Delhi and Bangalore. AMP Supercars, Bagga Luxury Motor works and Jubilant Autoworks are the three dealerships appointed by the company in India. Corporate operations are based out of Fiat Corporate HQ in Mumbai for Maserati.

Let’ discuss a little history about the brand. Maserati was established in December 1914, Bologona. This makes the brand one of the oldest brand in the world, completed 100 years last year. Maserati was first associated with Ferrari, which as we know, now is also a part of sports car brand under the parent company Fiat. However, the stylish saloon maker is based in Modena. Ever since May 2014, the company has decided to go full berserk around the globe and that is why India launch happens today.

All of that has resulted them to sell 36,500 units which are quite stellar numbers for a niche brand. Today the Mondena factory and AVV Giovanni Agnelli plant in Grugliasco. The company produces the GranTurismo and GranCabrio as well as the Quattroporte and Ghibli out of their facilities in Italy. The Levante SUV will also come to India in the year 2016!

Once launched in the year 2015 throughout the world. The Levante will be assembled in Mirafiori Plant, in Turin. The company is placing a production output cap at 75,000 vehicles globally.

The Ghibli will be offered only with one diesel engine, one set of tuning only as of now. The engine is a 3.0-litre unit that produces 275 HP of power and 570 Nm of torque. The engine is mated to an 8-speed automatic gearbox. There is a 250 BHP version, but only for home ground, Italy.

The GranCabrio is a soft top coupe. The two door coupe comes with naturally aspirated V8 engines with two power outputs that is the between 405 and 460 BHP. Gran Cabrio will be also offered MC variants which are even high performance variants of the normal car. Like what ///M division is to BMW for example. The Quattroporte saloon is being offered with both V6 and V8 engines that churn 330 – 530 HP. The vehicle also gets a V6 diesel engine producing 275 HP of power from the Ghibli. The Quattroporte will come with four variants and those are S, S Q4, GTS and Diesel.

Maserati on the launch said that they are looking to enter in Kolkata, Chennai, Ahmedabad. Hyderabad is the next city where the company establishes its dealership. The city has attracted a lot of premium brands lately! Maserati has launched the entire range in India.

As expected, the cars come as completely built units and pricing is on the steep side. Maserati prices the Ghibli diesel at RS. 1.1 cr, Quattroporte diesel at Rs. 1.5 crore, Quattroporte GTS Rs. 2.2 crore, GranTurismo at Rs.1.8 crore and out of this world, gorgeously looking Gran Cabrio, at Rs. 2.0 crore