At the Auto Expo 2016 Maruti Vitara Brezza was the most talked about car initially, as it mark’s Maruti Suzuki entry to the most happening compact SUV segment. The car is launched in India with the starting price of Rs. 6.99 lakh and has already garnered appreciation.

Sculpted tastefully Vitara Brezza gets features like automatic projector headlamps, daytime running lights, scuff plates and many more. Vitara Brezza is directly lock horn against Mahindra TUV300 & Ford Ecosport, while the Nissan Terrano is also a capable rival against it. Although Terrano is not very popular in India, but Terrano is the one of the most Muscular SUV available in India. Let’s take a look at the specsheet based comparison to learn who stands where. Talk about the styling, Nissan Terrano sports a bold grille at the front with muscular front bumper. Large front headlamps look aggressive, while the hood gets sharp creases adding on the masculinity. The side profile is pretty similar to the Renault Duster. It gets huge wheel arches, and all the muscular looking cuts and creases. The roof rails make the car sporty, while the rear fenders look beefy. The rear gets angular taillamps, and the rear bumper looks muscular just like the front one. Based on the all new platform, this car gets styling cues from the recently developed Suzuki Vitara. The dual tone car’s side profile boasts rising waistline and a roofline sloping toward rear, which actually makes the sporty. Five twin spoke 16 inch alloy wheels make the car bolder.

Terrano gets a wheelbase of 2673 mm compare to Vitara Brezza’s 2500 mm. Nissan Terrano gets 12 mm of extra ground clearance than the Vitara Brezza at 210 mm. So visibly the Terrano comes larger, wider and taller undoubtedly. Nissan Terrano’s interior seems too plain with the three spoke steering wheel, with dual round dial at the instrument cluster. The centre console doesn’t sport many things to talk about. Dual coloured dashboard looks good albeit. Being a visibly larger car than Vitara Brezza as it sports lot of space inside the cabin and five persons can easily afford themselves in there. At the rear 475 litres of boot space means you get a lot of space for the luggage. 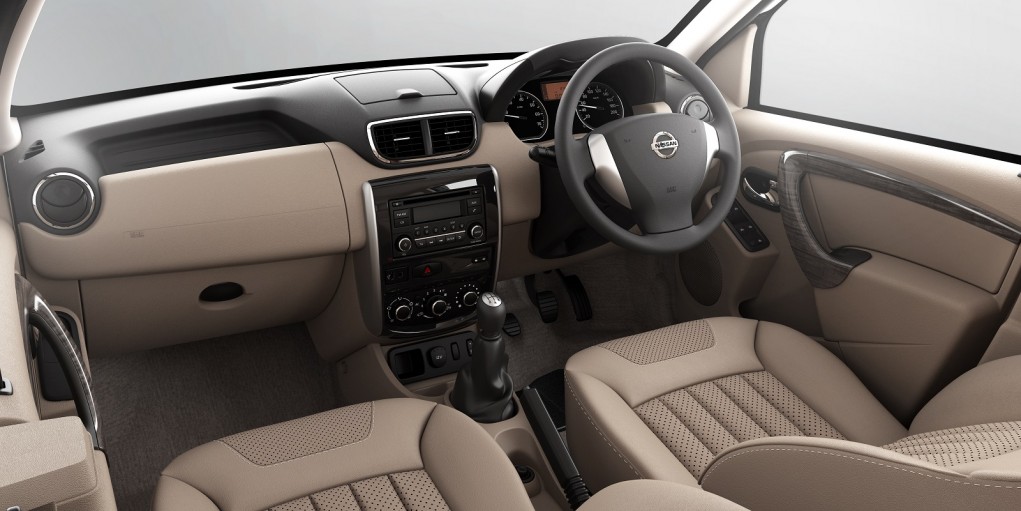 The Maruti Vitara Brezza gets an interior lot more appealing and stuffed with features. The three spoke multifunction steering wheel, dual round dial integrated instrument cluster with a LCD display at middle. The centre console gets highlighted with body coloured panel. A touchscreen SmartPlay infotainment system flanked with control buttons and AC vents. Only the top trims will get the touchscreen although. It gets features like climate control, cruise control, cooled glove box, power windows and tilt adjustable steering wheel. The top end trim will get some more features like boot lamp, mood light at instrument panel, premium fabric upholstery. Although visibly the car might look a bit crumpled compare to the Terrano, but it gets sufficient space for five occupants.

The Nissan Terrano is available in two different powertrain options. It gets a 1.5 litre diesel engine under the hood with different tunings to produce 85 PS and 110 PS of peak powers and 200 Nm and 248 Nm of peak torques respectively. The transmission duty is done by a five speed manual gearbox. Apart from this there is a petrol engine available in form of a 1.6 litre unit, which also gets paired with a manual gear box and kicks out 104 PS peak power and 145 Nm peak torque. Fuel economy for this car is around 20.5 kmpl. On the other hand the Maruti Vitara Brezza comes with 1.3 litre unit mated to a five speed manual gearbox under the hood, which will churn out 90 PS peak power and 200 Nm of peak torque. On the fuel economy front Vitara Brezza is way ahead than Terrano with its mileage of 24.3 kmpl. Maruti is expected to offer a petrol variant in later stage which might get an AMT gearbox.

While the Nissan Terrano is priced in between Rs. 10.3 lakh to Rs. 13.6 lakhs, Maruti Vitara Brezza is been offered with a price tag ranging Rs.6.99 lakh to Rs. 9.68 lakh depending on the variants. On the styling front, Maruti Vitara Brezza looks as much aggressive and appealing as the Nissan Terrano but it carries a design language of Suzuki Vitara and hence, it looks impressive in the first glance. Talk about the interior, the Vitara Brezza gets loads of impressive features, which cannot be seen inside the Terrano. Although if you are looking for extra space, then Nissan Terrano seems better than Vitara Brezza but for that, you have to pay nearly 3 Lakh premium over Vitara Brezza. On the power and performance front the Terrano 85 PS variant and Vitara Brezza is similar, while Terrano also has a retuned 110 PS diesel variant and a petrol powered variant as well. But comparing the pricing of both the cars Vitara Brezza seems a good buy than the Nissan Terrano. Apart from that, you get the trusted brand name of Maruti with it.