Maruti Vitara Brezza is finally launched in India with a starting price of Rs.6.99 Lakhs, hence by putting an end to all the curiosity and anxiety. In India, pricing is the foremost ingredient in deciding the future of a vehicle in India and Maruti revealed today the prices from 6.99 Lakhs to 9.68 Lakhs.

Maruti Vitara Brezza and Mahindra TUV300 are equal in length, i.e. 3995 mm. However, Maruti’s warrior lags behind in both width and height as it measures 1790mm and 1640mm against the TUV300’s 1835mm and 1839mm, respectively. As far as wheelbase is concerned, which determines the space in interior cabin, the TUV300 emerges triumphant by a long way with 2680mm over the Vitara Brezza’s 2500mm wheelbase.

Ground clearance remains to be an indispensable ingredient of a SUV and here too, like in every aspect, the TUV300 holds the edge, albeit by a petty margin of 2mm. Last but by no means the least, the boot capacity and it also doesn’t offer a change as the Mahindra’s soldier leads the charts with a space of 384-litres over Brezza’s 328-litre. Moving to the exterior styling, Mahindra TUV300’s flaunts a boxy design with front fascia heavily inspired from a battle tank. Underpinning an all-new platform, the sub-compact SUV has been designed in-house by Mahindra with inputs from the Italian design house Pininfarina, which is now taken over by the company. The TUV300 has raised shoulders, high front nose, flat roof, high ground clearance, and straight bonnet.

Moving to the Maruti Vitara Brezza, it boasts of Bull Horn’ shaped LED light guides with projector headlamps and turn indicators in the front bumper. There is a bold chrome grille at the front and square wheel arches, which further accentuate the sporty character of the mini SUV. Exterior styling is quite a personal choice, and you may not like what I like, and vice-versa. But still, I would go with Vitara Brezza. 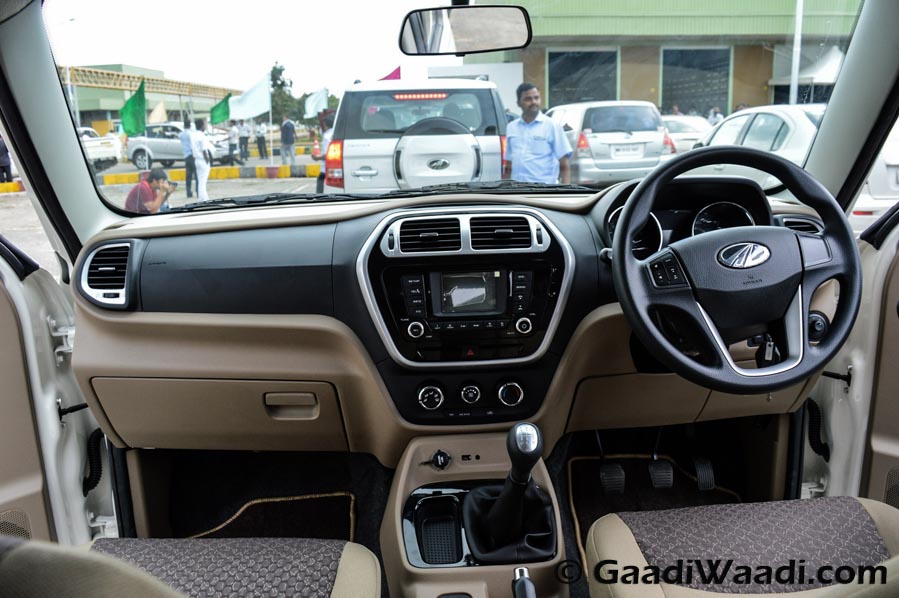 In addition, it also has the best-in-class legroom, headroom, and shoulder room. Now, on the other hand, the Vitara Brezza would be the first sub 4-meter SUV to come with options of personalization. The company is offering three themes – Glamour, Urban, Sporty – to choose from. The SUV gets sporty seats and versatile flip folded rear seats as standard. As for features, it comes with cockpit style instrument cluster with mood lights, Dual colour scheme with floating roof, and SMARTPLAY infotainment system. Though, both the SUVs are packed with numerous features but still TUV300 offers a bit more than Maruti’s immensely worthy challenger.

Coming to the engine power and torque performance, it is where the Vitara Brezza outshines Mahindra’s bull. Despite coming with a heavier motor of 1.5L, the TUV300 delivers 84bhp and 230Nm, while the Maruti’s all-new offering churns out 89bhp and 200Nm – owing to the company’s tried and trusted 1.3L DDiS mill.

On mileage front, Vitara Brezza, with a whooping 24.3 kmpl, not only outnumbers the TUV300 but also epitomizes the entire SUV segment of India, while claiming the crown of India’s most fuel efficient SUV. Both the compact SUVs come with 5-speed manual gearbox as standard. However, the TUV300 has an added advantage of AMT gearbox as Maruti hadn’t had a word on when it would introduce the AMT unit with the Vitara Brezza. whereas, Maruti Vitara Brezza’s price is from Rs. 6.99 Lakhs (Ex. Showroom) to 9.68 Lakhs – a little lesser than TUV300 in base variant while top of the line variant with added fetures cost 28K above TUV300. What strengthens our belief is that Vitara Brezza comes with a localization level of 98 percent.

Mahindra TUV300 seems to be more potent and complete as compared to the Vitara Brezza due to its inner cabin spaciousness, AMT gearbox, and belligerent styling. Though, Maruti Vitara Brezza regains the lost ground upto a greater extent by returning impeccable mileage as it is priced nicely, it likely to well prove to be Maruti’s next magnum-opus vehicle by ringing the sales chart as its other vehicles.