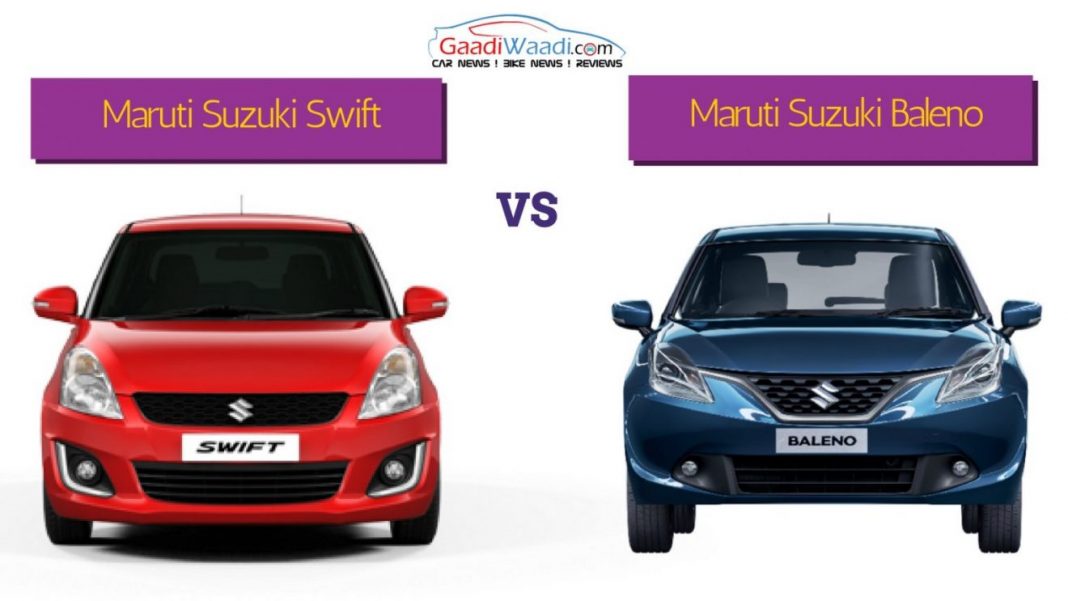 Maruti Suzuki is known over the decades for building customer-friendly cars in low price brackets. This is the very reason why the Indo-Japanese brand has tasted success every year as the volume sales have only been increasing. But as new foreign manufacturers started coming up with attractive products, Maruti Suzuki decided to not rest on its laurels and devised a strategic change.

For a brand that even the majority of non-car enthusiasts have good opinion on, it was a massive step as the Nexa premium dealerships were set up to elevate the contemplation of its image among customers. Initially met with hiccups due to the underwhelming sales for the S-Cross, Maruti didn’t shy away from introducing the Baleno at a premium price range and as ever the rest was history!

Looking back at the 12-month period since Baleno’s launch, over one lakh units were sold as it regularly finds itself in the monthly top ten passenger vehicles’ sales chart. While it can be said that the Baleno has been very keen at knocking over main rival Hyundai Elite i20, the sales of Swift also came under jeopardy due to the rise in popularity of the premium hatchback.

So we are here to answer the question for you in the simplest way possible while providing all the info you need to make the right decision about which one to choose. We pitted both the potent hatchbacks in our specs comparison, read on to know more: 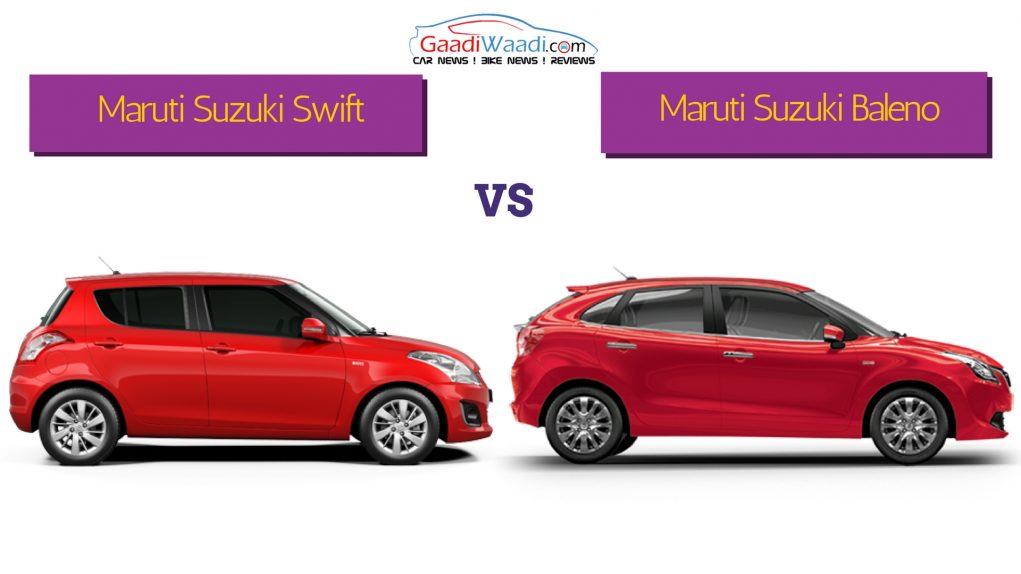 The Swift is clearly the best boxy looking hatchback in the country with sharp lines on both ends and huge head and tail lamps. Doors are angular, which give it the sporty stance. Large and sporty looking wheels add to the flavor of the car.

Funky rear look and solid looking front are the other highlight of the car. Baleno comes with a lot of kit too, such as LED DRL and projector and LED tail lamps which add to the cool quotient, which Swift doesn’t have. 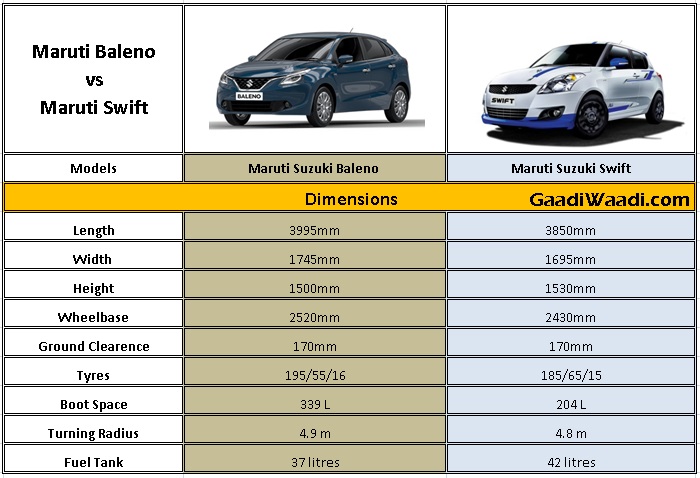 Baleno, on the other hand does look very swoopier and liquid with its design language as the long side profile travels below the window line adds a line of sophistication. Rear is well done with least, but interesting bits when it comes to panel sizes such as bumper and tailgate.

Front grill is not that great, but headlights and front bonnet are very moulded. Clearly both cars have their edge in terms of styling and it’s difficult to choose when it comes to this part of the decision. 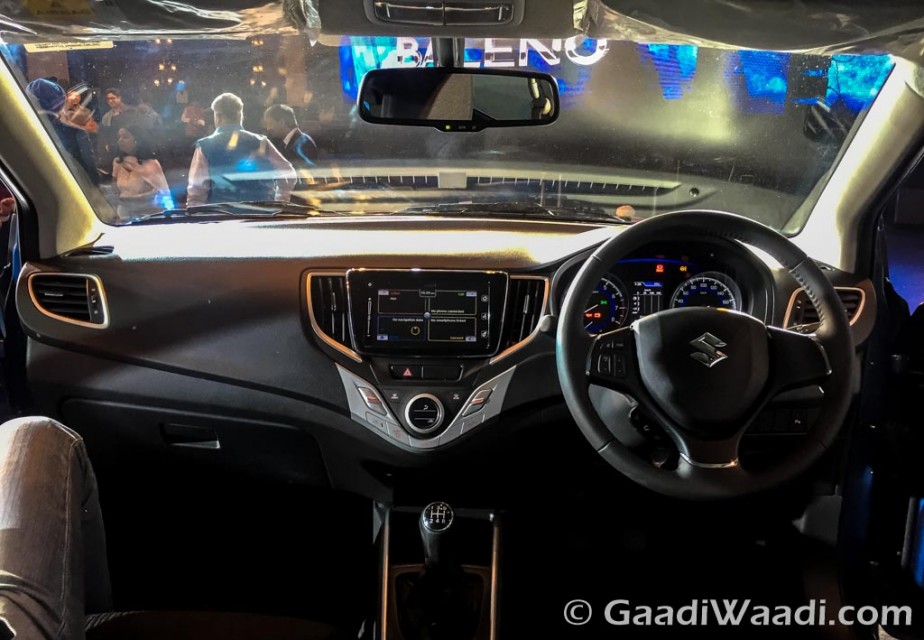 Again, there is a lot of similarity at first glance because all black theme of the interior continues. While Baleno has a slightly grey tone to it, Swift has jet black theme black interior which is even sportier.

Apart from the Premiumness Baleno offers, Standard Dual Airbags & ABS across all variants are the USP of the premium hatchback

Baleno continues to be classy on the inside with new buttons in the aluminum inserts and on the center console. A 4.2-inch touchscreen infotainment system is highlighted with Apple CarPlay connectivity. 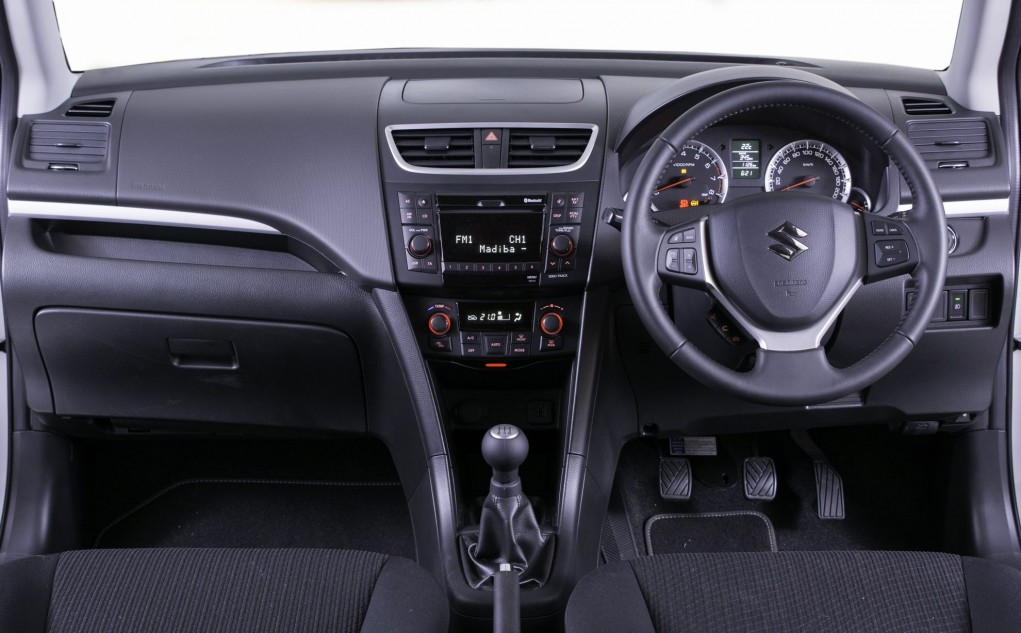 Baleno is clearly ahead when it comes to space up front and rear while boot space is miles ahead of the Swift too. Quality on the Baleno is also better than the Swift but by smaller margin. The Swift facelift has similar features as the Baleno but, again, it’s the touchscreen which makes thing better in Baleno’s case. 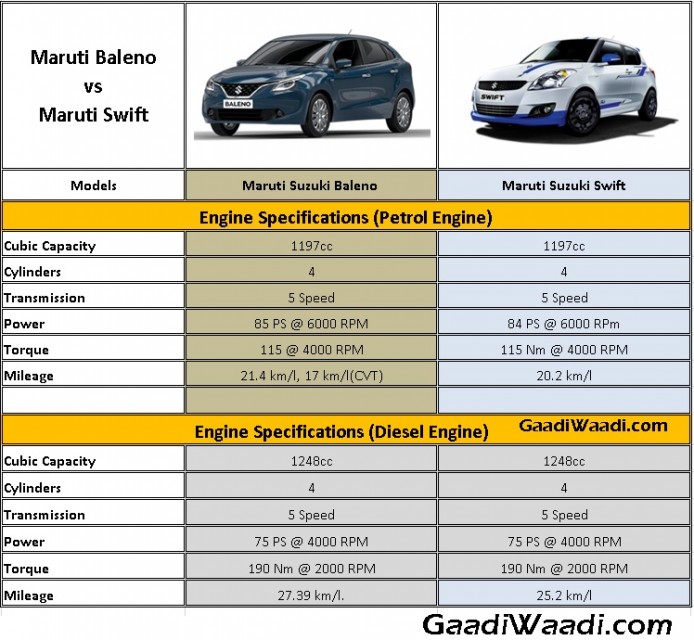 Again! Similarity doesn’t seem to end. The 1.3 diesel and 1.2 petrol continue to be a part of the Baleno engine bay. Same state of tunes have been witnessed too. 85 BHP for petrol and 75 BHP for diesel are the respective power figures. We were all expecting 90 BHP diesel engine tune for Baleno but Maruti had other plans as it took out efficiency numbers like no other.

They are 27.3 km/l for diesel and 21.4 km/l for petrol respectively. Swift delivers 20.4 km/l and 25.2 km/l. Clearly Baleno is lighter by almost 100 kgs over the Swift. Handling was claimed to be almost equal, but the Baleno is slightly softer for better ride quality over our broken roads. As for the driving comfort and ride capability, the Baleno comes out certainly on top. If you crave for more power, the 1.0L Boosterjet turbo petrol in the upcoming RS variant should fit the bill perfectly. 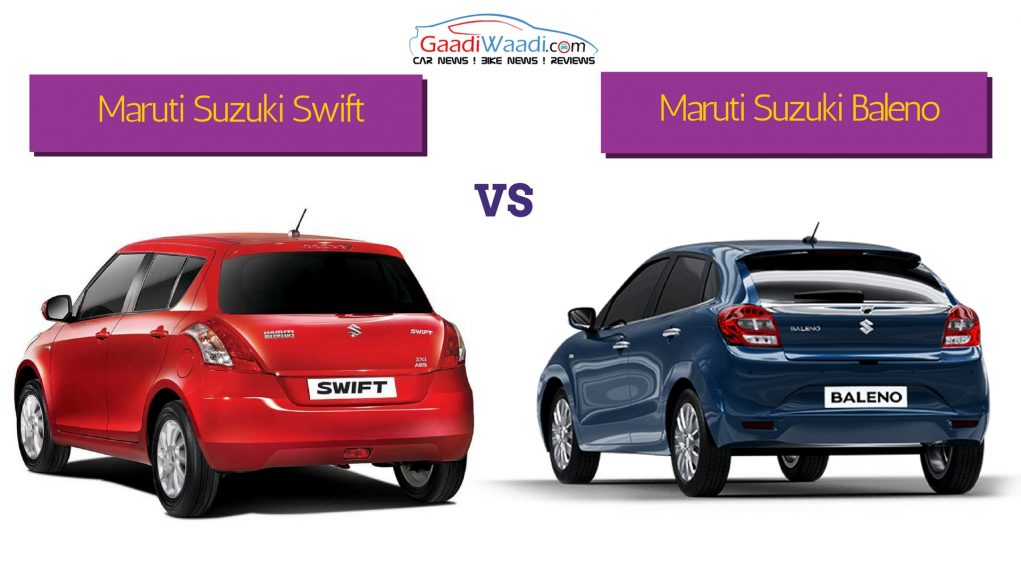 Maruti’s Pricing strategy has played a slight disadvantage on paper this time. Since Maruti Suzuki has priced Swift very well from the outset, the Baleno follows in those footsteps and initiated cannibalization here. The pricing is very near to each other when it comes considering car for the daily commute. 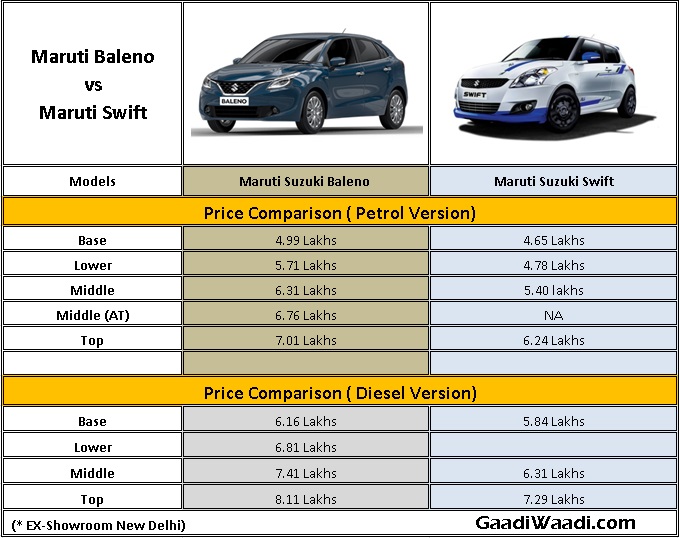 However, Baleno is the clear winner as it offers more kit, more value, more safety, more mileage and everything you name it. Be it style, comfort or premium experience that is set to be experienced from the NEXA dealership the Baleno takes the crown in this test until unless you are very tight on budget.