Maruti Suzuki YRA (Fronx) has been the eagerly awaited Premium hatchback from India’s leading car manufacturer. We had bought you spy shots all the way and today, Team-BHP shared new details of the Export version of YRA. The interiors have been spied in all glory this time and it reveals the kind of kit and features the YRA packs.

Interiors of the Suzuki YRA are loaded with black fabric with silver accents. The Suzuki YRA has a multi-function steering wheel this time around. Features include, cruise control, audio system with bluetooth telephone functions. 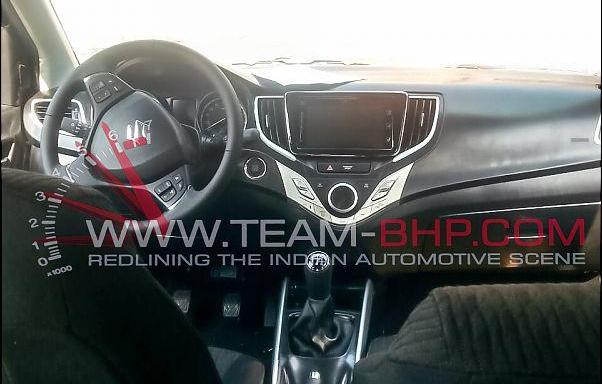 A two pod instrument cluster with an MID ,analogue temperature gauge, a touchscreen infotainment system. The Suzuki YRA is also set to get a start/stop system, climate control like the Swift. Airbag deactivation switch, heated front seats and a dead pedal are also a part of the Suzuki YRA. Projector headlights have been witnessed with DRL and so has been the LED tail-light.

Engines on the new Suzuki YRA will be the new turbocharged petrol engine as well as tested and tried 1.3l 90 PS multijet. The 1.0l motor that will produce around 100 BHP. The diesel will be the 1.3l Multijet with 90 PS tune and 200 Nm of torque. Both engines will come with 5-speed manual gearbox. AMT option is expected in the YRA some time later after the initial launch. Launch is expected around festival season this year and will compete with the like of Honda Jazz and Hyundai Elite i20.