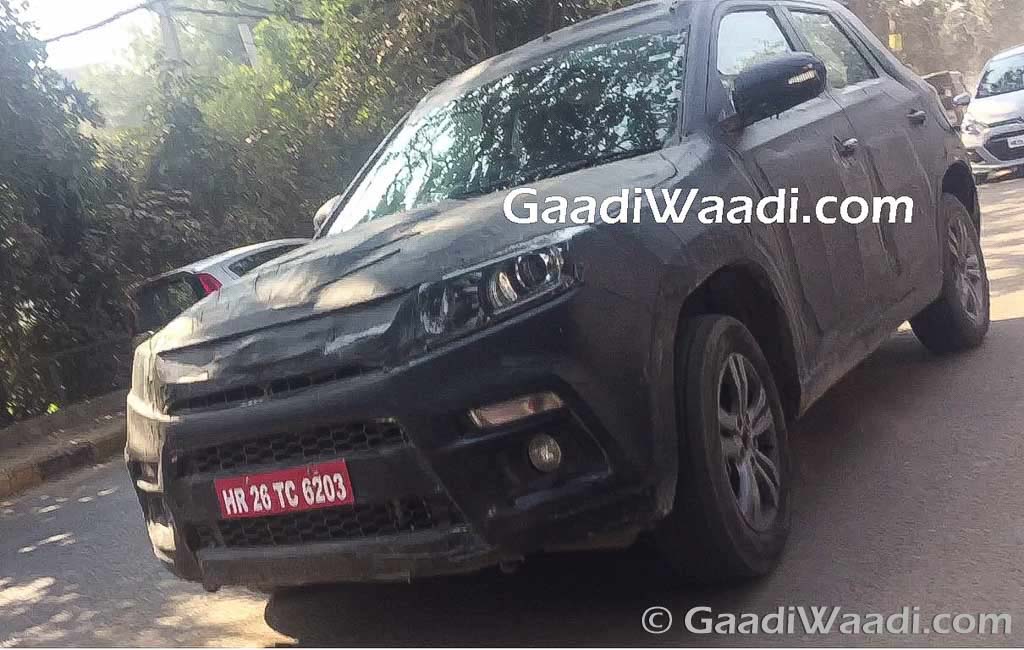 Maruti Suzuki Vitara Brezza has been caught testing by us once again on the roads of NCR. With all due credits to Mr.Vipin Kataria for the spyshots of the testing mule, we can divulge that the front fascia looks to be in accordance with the rendering image published by us a few months back. Influenced by the Suzuki iv-4 concept’s design language, the compact SUV comprises tapered roofline and an A-pillar resembling to that of the Swift hatchback.

The spy pictures suggest that the Vitara Brezza could come with class-leading ground clearance of over 200mm to stick by its sturdy off-roading capabilities and solid metallic paint finishes like the Vitara crossover inspired blue colour option. Up front, a vertically-slated grille lies below the clamshell bonnet, projector headlights with a secondary halogen unit, integrated LED DRLs and small quarter glass windows are likely to feature. We revealed the Vitara Brezza’s rear-end profile carrying ZDi logo last month and in contrast with initial expectations, the probabilities of the new compact offering from Maruti Suzuki to be featured as the third premium product on Nexa dealerships are highly unlikely.

The compact SUV will be positioned between the premium S-cross SUV and the Swift hatchback and is expected to be launched at the approaching 2016 Auto Expo in February. Prices are likely to be in the aggressive range between Rs. 6.99 lakh for the base variant and Rs. 9.98 lakh for SHVS diesel hybrid engine top-end model. Debuted at the 2012 Auto Expo in the XA-Alpha concept guise, the Vitara Brezza could most likely be powered only by the new 1.3-litre four-cylinder 90PS SVHS mild hybrid diesel engine that was introduced on the Ciaz sedan last September. Whilst the hybrid diesel powering the Ciaz is claimed to deliver 28.09kmpl, we could see fuel efficiency rated at around 26kmpl for the Vitara Brezza. A 1.2-litre K-series petrol seen in the Ertiga cannot be ruled out either. Both the engines could be mated to a five-speed manual transmission and a CVT automatic is more likely to be offered as a petrol variant to rival the EcoSport AT. Safety features like ABS with EBD, Dual Airbags and anti-theft security system could be offered as standard across all variants as in the Baleno. Equipment sharing with the Swift and Baleno will include a touchscreen SmartPlay infotainment system, voice command function and reverse parking camera among several others.