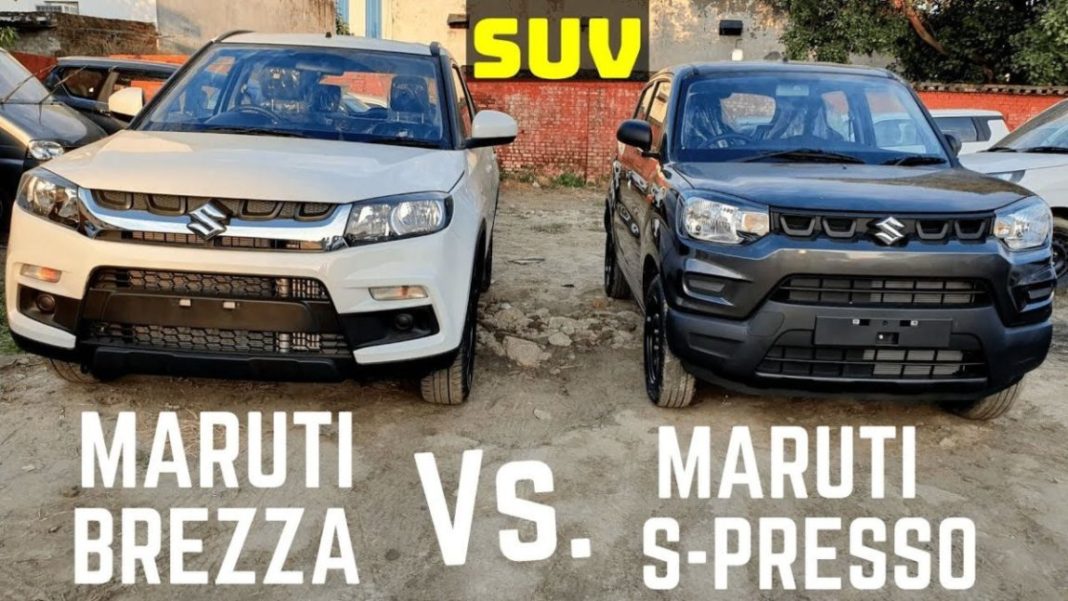 Maruti Suzuki recently launched the S-Presso in India, which has been touted as a micro SUV by the Japanese carmaker. Here’s a video showing the S-Presso standing next to the subcompact SUV offering from Maruti Suzuki, the Vitara Brezza to get a clearer look at how the micro SUV stands.

A high bonnet line and ground clearance give the S-Presso a commendable tall stance for its price range. However, the S-Presso’s 1,564 mm height does not come close to Vitara Brezza’s 1,640 mm. The high ground clearance paired its height gives S-Presso an upper hand over its competitors and makes it viable option considering the Indian roads.

The Maruti Suzuki S-Presso’s price starts from Rs 3.69 lakh onwards, which makes it one of the most affordable offerings by the carmaker. The car is offered with only one engine option for now, which is a 1.0-litre 3-cylinder K10 petrol unit that makes 69 PS of maximum power and 90 Nm of peak torque.

It comes with the 5-speed manual or a 5-speed automatic transmission options. Maruti Suzuki is also likely to bring CNG and LPG variants of the S-Presso into production soon. Based on the Heartect platform, the S-Presso has the lowest kerb weight for a Maruti Suzuki car, which is just 736 kg.

Despite the low weight, safety is not compromised upon. The S-Presso complies to the safety norms set by the Indian government, which means it comes loaded with safety tech. It includes front dual-airbags (top variant only), rear parking sensors, ABS with EBD, front seat belt reminder and a high-speed warning system as standard equipment on offer.

Apart from the safety tech, the S-Presso also comes with Maruti Suzuki’s Smartplay Studio unit inside the cabin. The 7-inch touchscreen system can also be seen on other cars like Baleno and XL6, and comes with Apple CarPlay and Android Auto compatibility.

The S-Presso is priced between Rs 3.69 lakh for the base ‘Std’ variant, to Rs 4.91 lakh for the top-end VXi automatic variant. It takes on other entry-segment cars like the recently launched Renault Kwid, the Datsun redi-GO and one from its very own family, the Alto K10.