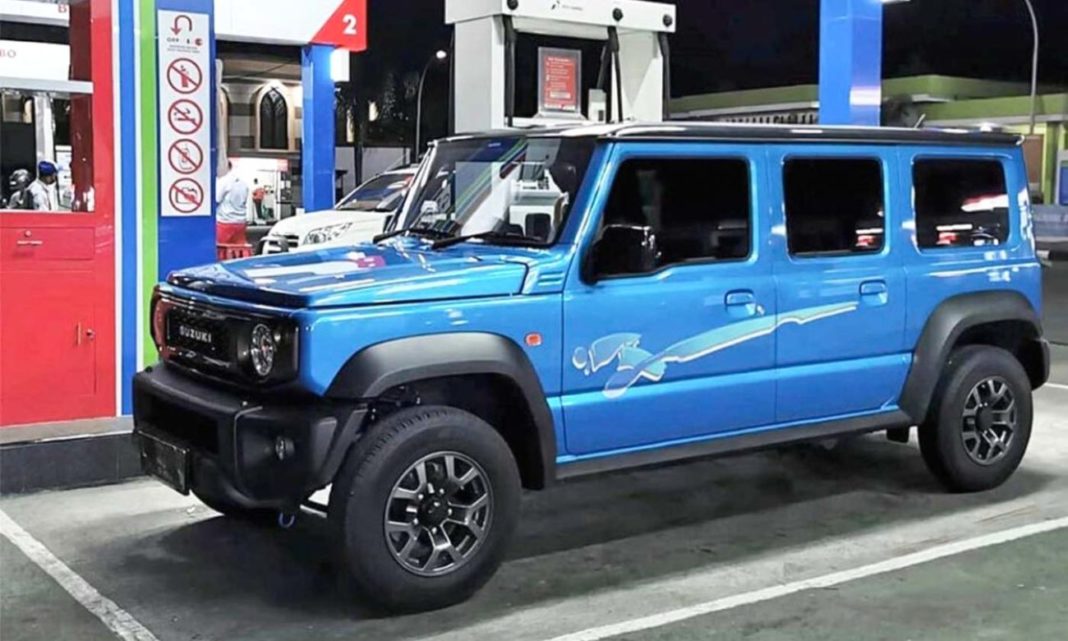 Suzuki Jimny is one of the most iconic SUVs in the world, famous for being one of the best budget-friendly off-road vehicles available today. The Japanese carmaker is currently working on a new long-wheelbase version of Jimny, which is expected to make its global debut at the 2023 Auto Expo.

A test mule of the upcoming Suzuki Jimny 5-door was recently spied during testing on European soil. Speculation suggests that the model was produced in India by Maruti Suzuki and then shipped for testing overseas, which is very likely, as the production of the 3-door Jimny is already ongoing in our country.

We believe that the 5-door Jimny will be manufactured in India, for both domestic as well as export markets. Thanks to reports from Japan, details about the SUV have already leaked online. The forthcoming 5-door Jimny will have a length of 3,850mm, with a 2,550mm long wheelbase. This will be a 300mm increase in both length and wheelbase length. The SUV’s styling will also see minor updates.

The ground clearance will remain unchanged at 210mm. The 5-door Jimny will be at least 100 kg heavier compared to the current 3-door version, expected to weigh in at 1,190 kg (kerb weight). The 3-door version is powered by K15B engine – a 1.5L NA petrol unit, with 103 PS of peak power on tap. Transmission options include a 5-speed manual and a 4-speed torque-converter automatic, with a part-time 4WD system.

As per reports, the 5-door version is expected to be powered by the brand’s new K15C engine – a 1.5L NA petrol unit, with a mild-hybrid system on offer as well. While the manual transmission option will continue to be a 5-speed manual unit, the automatic transmission will be a new 6-speed torque-converter unit. A 4WD system will also be offered on the SUV.

Some reports even state that Maruti could opt for a smaller turbocharged petrol engine instead (a 1.0-litre or a 1.2-litre unit), which would help the SUV fit into a lower tax bracket in the Indian car market. Upon launch, the Maruti Suzuki Jimny 5-door would be a more affordable alternative to Mahindra Thar and Force Gurkha (both of which will also get 5-door versions in the near future).