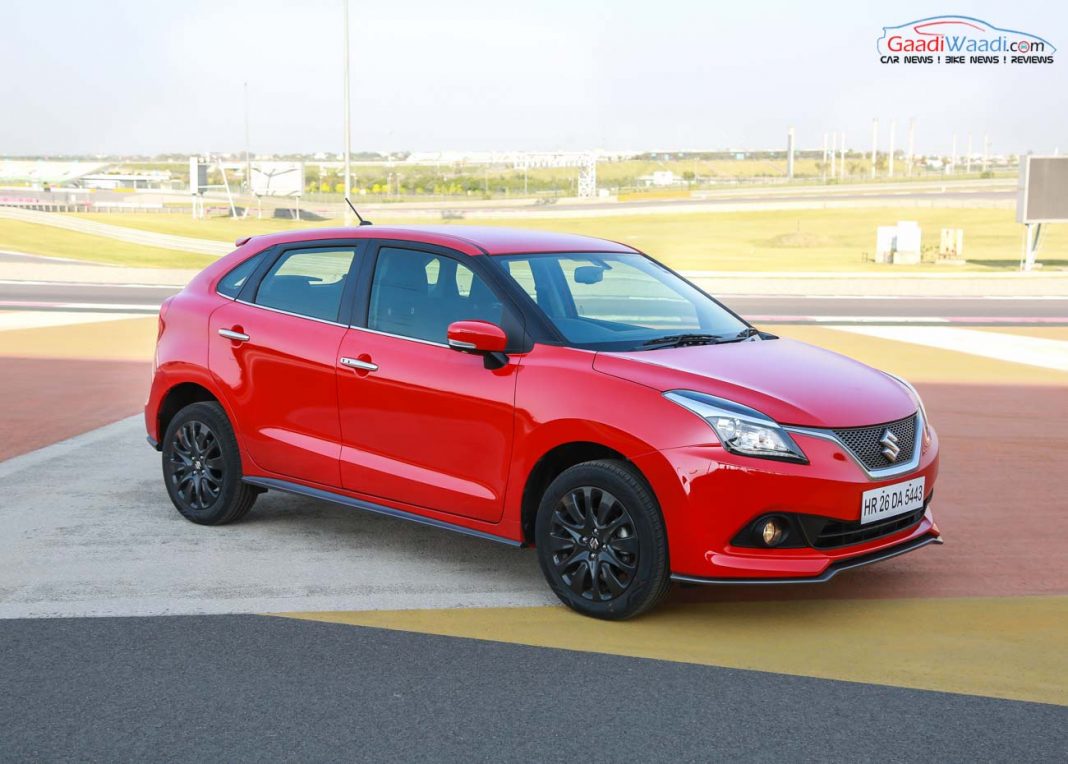 Our Maruti Baleno RS review will detail you through all the changes made and how the Boosterjet engine is like to drive. But will it justify the extra price? Read on to find out:

Maruti Suzuki’s latest trend of injecting premium status into its new products has certainly worked. Ever since the advent of Nexa dealerships and market entry of S-Cross, the leading car maker’s intention and ability to see beyond conventional volume segments came into light. Venturing into segments with untapped potential, the Baleno premium hatchback was the first true success from Nexa outlets.

Buoyed by its popularity, Maruti has expanded the offering list and included the Ignis which will be followed by the shift from regular networks to Nexa for the upcoming Ciaz facelift. Baleno was already an evocative name in the Indian auto industry and would be resurrected to compete against the likes of Hyundai Elite i20 in late October 2015. 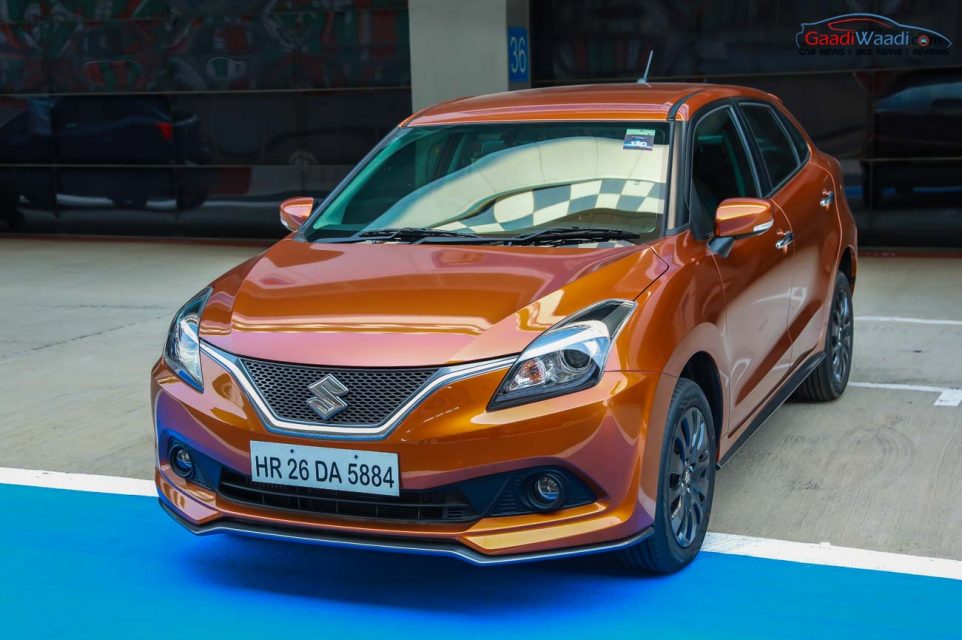 It has gone on to set new heights for the company with a stylish package blended in with nimble performing reliable engines seen in the Swift. One of the upshots of its fame is that Maruti could bring in more variants and substantiate its sales figures. There was a big gap existed to its hot hatchback rivals VW Polo GT TSI and Fiat Abarth Punto and it was rightfully addressed when Maruti debuted the RS (Road Sport) variant at the Delhi Auto Expo in February 2016.

For over the last one year, the Baleno RS created quite a buzz as to what it would dish out in terms of performance and appearance. The Boosterjet engine was the major talking point but its power output could be lambasted by some. As it is being offered only in the top-end Alpha variant, both the ‘form and function’ factors are taken into account to define its position and the additional cost you would have to bear in while purchasing this product.

We so wanted to get our hands on the Baleno RS to explain all the tiny bits of detail you would want to know. Excitingly, let us dive in and analyse right away if it lives up to the hot hatch status: 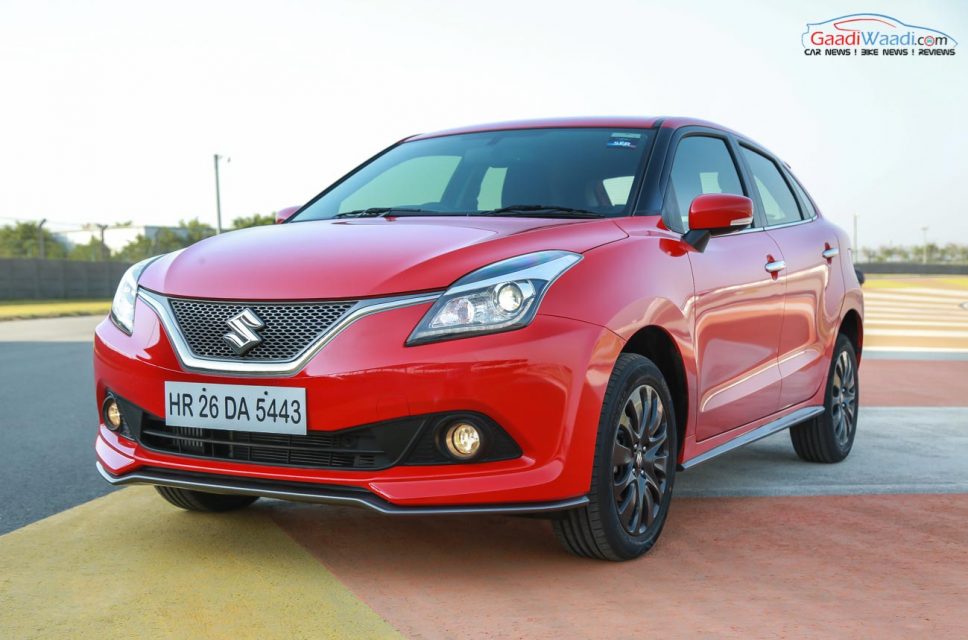 Design is a core form of expressing the characteristics of a vehicle and in case of the RS derivative of Baleno, there have been plenty of thoughts shoveled in. A comparison with the standard model side-by-side would give you a clear picture of how the RS is subtly different. The front fascia is where the apparent changes can be clearly noted. The regular Baleno has a rather uninspiring bumper but the bigger air intakes on the RS version make it pretty unique and aggressive.

Both the grilles are similar in appearance but, as it being important from visual standpoint, some modifications have been implemented to improvise its appeal. In contrary to the black grille accented in chrome, the RS variant receives the same chrome bezel with a sporty mesh. You cannot help but think a blackened grille would have done a better job but still it is all well laid out. 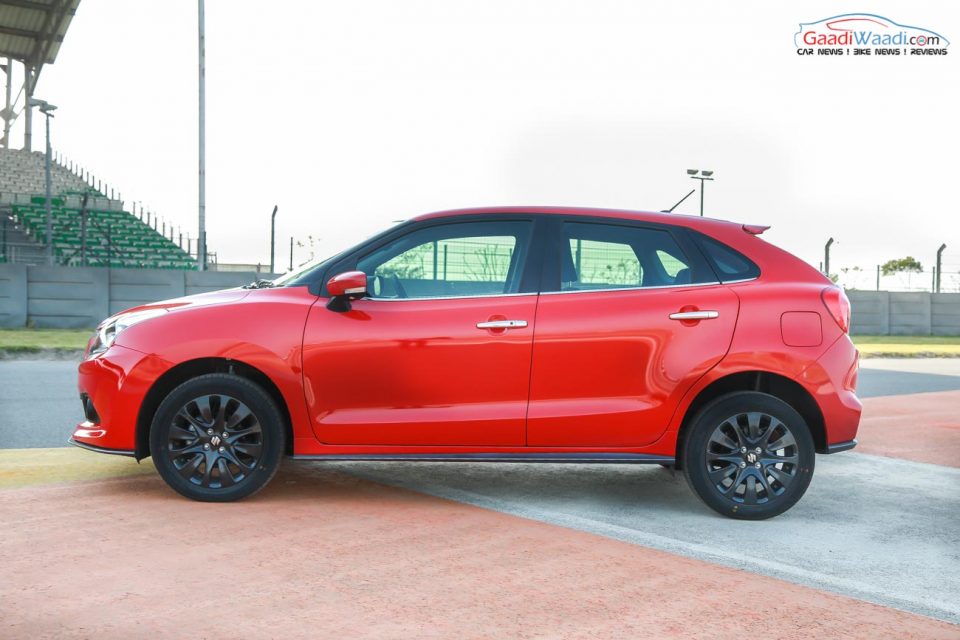 One more styling differentiator is the lip spoiler on the bumper and it looks all the more purposeful adorned with satin black finish. On the sides, the same treatment has been applied as the new side skirts are painted in satin black shade to stand in line with the front bottom bumper portion. The side body kit does ensure a lowered stance to the RS when compared to the regular Baleno and that bodes well for a sportier external appearance.

Out the back, the Baleno RS is fitted with a tail-gate mounted spoiler that can only be found in the top-spec regular Baleno trims. The 16-inch alloy wheels on both the cars are similar except that the RS’ get painted in gloss black while the regular model has silver or gunmetal shade. Perhaps, a newly designed set of alloy wheels would have made a world of difference in making the RS stand apart from the regular Baleno. 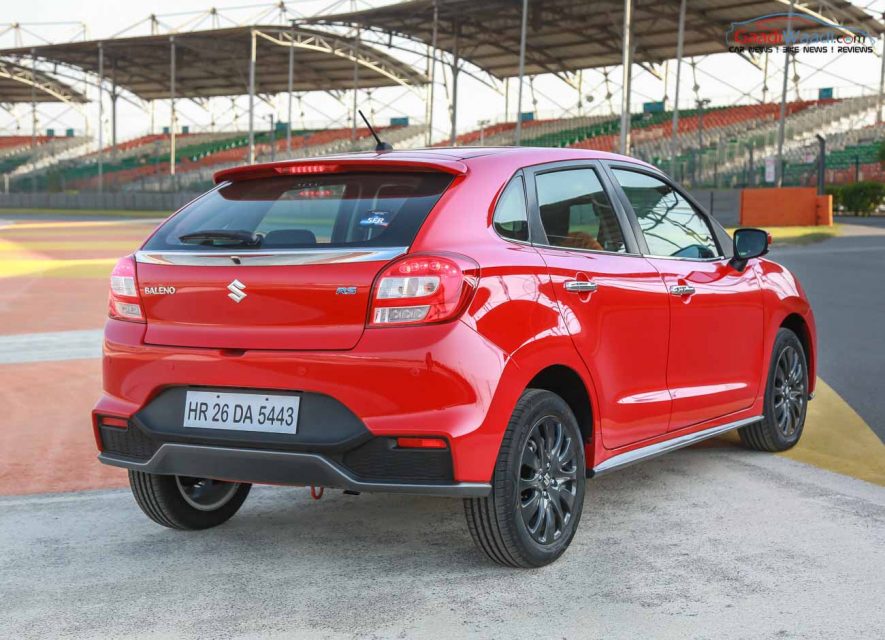 Like the bumpers up front, the rear bumper on the standard Baleno is body coloured but no separate diffuser system. In case of the RS, the square-shaped rear bumper is bigger and chunkier giving substantial road presence. The new shades in blue, bright red and orange have certainly upped the RS’ tempo but we wish the exhaust pipes would have protruded out underneath the bumper instead of being hidden.

Other important exterior features are blackened A, B and C pillars, projector headlamps, LED DRLs, chrome door handles, body coloured ORVMs, turn indicators on wing mirrors and UV Cut Glass. To wrap it up, lessening the chrome bits and adding more black gloss might have given a more menacing and aggressive styling. Nevertheless, it is still a good package over the standard Baleno that you would not complain about.

The regular Baleno premium hatchback was responsible for bringing a fresh breathe of life into the aged interior in the Maruti Suzuki lineup and the RS version follows the same theme. However, being a hot hatch there has to be elements highlighting its sporty importance and be immersive with the whole theme. The equipment list comprises of style enhancing metal finished inside door handles and parking brake while glovebox, luggage room and front footwell get light illumination. 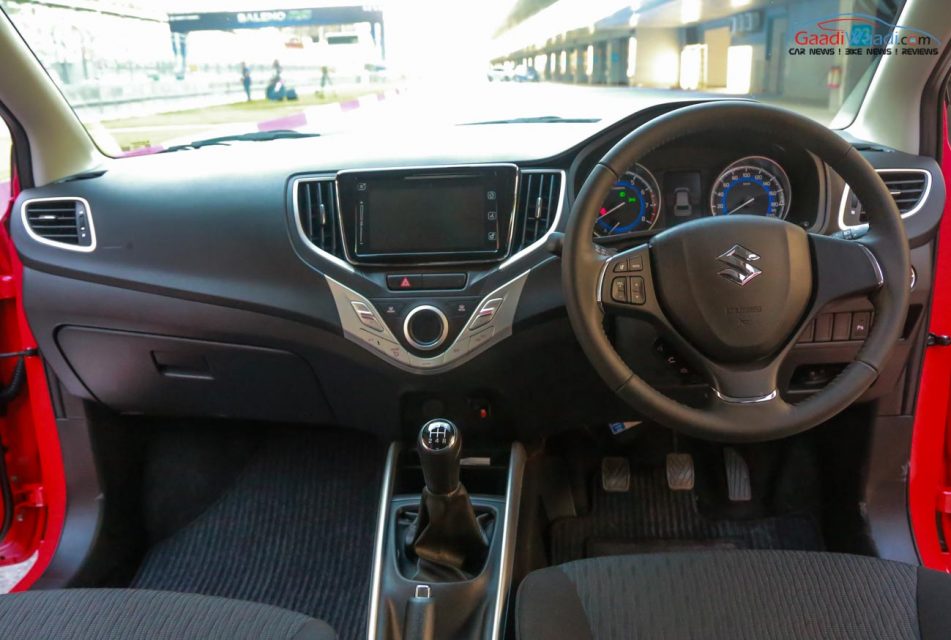 The multi-info speedometer display with colour TFT screen and steering wheel wrapped in leather material are part of the minor makeover package. It borrows techs like SmartPlay infotainment system with Apple CarPlay, Smartphone Connect, Navigation, Voice Command and Remote Control through Smartphone App alongside Bluetooth, USB and Aux connectivity from the standard Baleno. The three-spoke multi-function steering wheel with mounted controls, twin-pod instrument cluster, and a pile of other comfort and convenience features top out the impressive range of equipment made available.

Putting the general stuff aside, some of the essential features a hot hatchback should or might contain are bucket seats, contrast stitching, highlighting badges, a loud entertainment system or maybe six-point harness seat belts? We do not have any of those understandably to keep the costs down but the problem is the RS feels like just another conventional Baleno hatchback. All we expected was a contrast dual-tone colour scheme and RS badging in some places though. Perhaps the accessories department will have some answer to that! 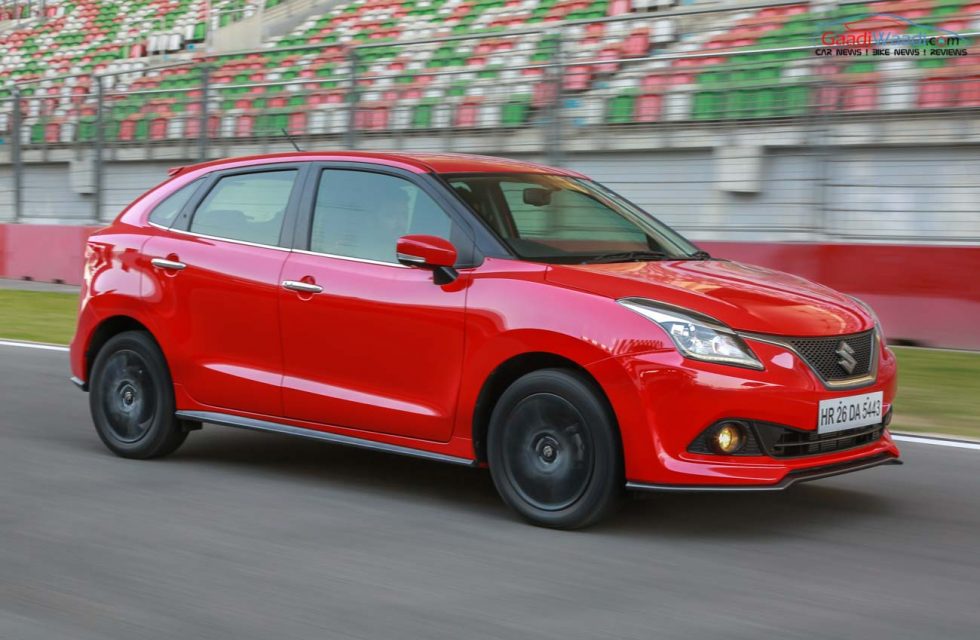 Now, over to the substantial change the Baleno RS brags about. It gets power from a 998cc, K10C, three-cylinder, DOHC, direct-injected, turbocharged engine which is good enough to deliver a maximum power output of 101 hp at 5,500 rpm and peak torque of 150 Nm between 1,700 and 4,500 rpm. The Boosterjet technology has offered 20% more power and 30% more torque compared to the standard and bigger 1.2-litre K-Series petrol engine. 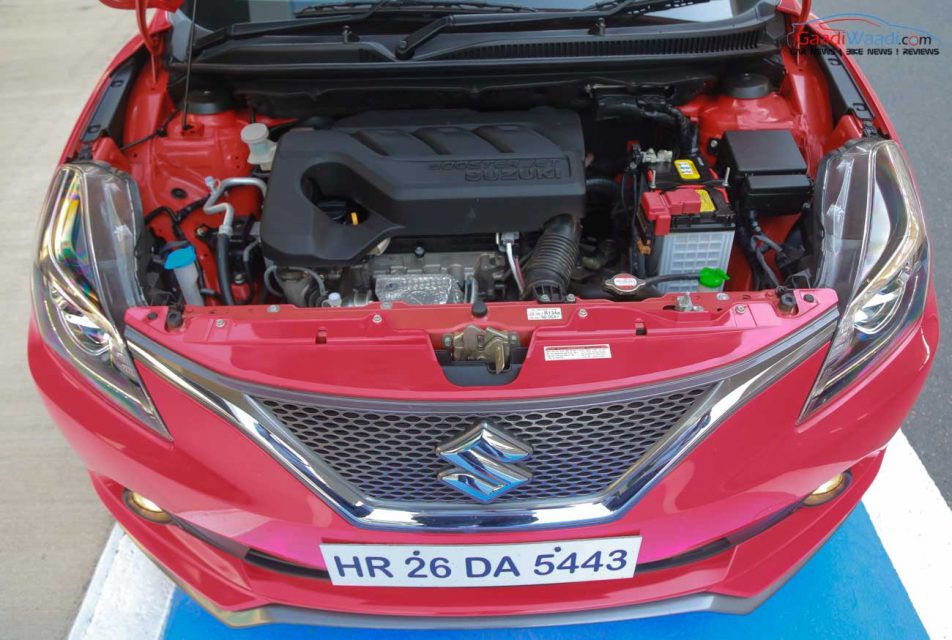 As VW Polo GT TSI comes with seven-speed DSG automatic, the RS was expected to get a CVT but it wasn’t the case as a five-speed manual sends all the power to the front axle. The all-new Boosterjet turbo-petrol motor is imported from Japan and is a derived version of the original 110 PS Boosterjet engine which was disregarded due to the unavailability of 91 octane grade petrol in India. 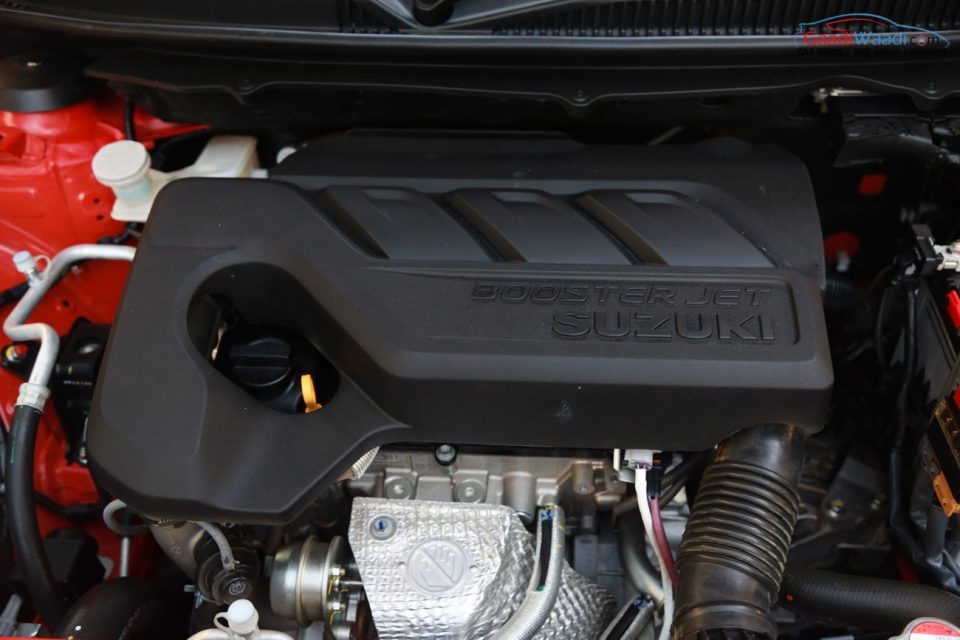 There is no place in India to better test the performance of a car than at the BIC. We tried redlining the Baleno RS several times but despite the long pit straight and back straight, the mix of high and low speed corners made life tough every 20 seconds. Step on the throttle, the power delivery is immediate right from 1,600 to 1,700 rpm and barely takes time to hit the 5,000 rpm mark. 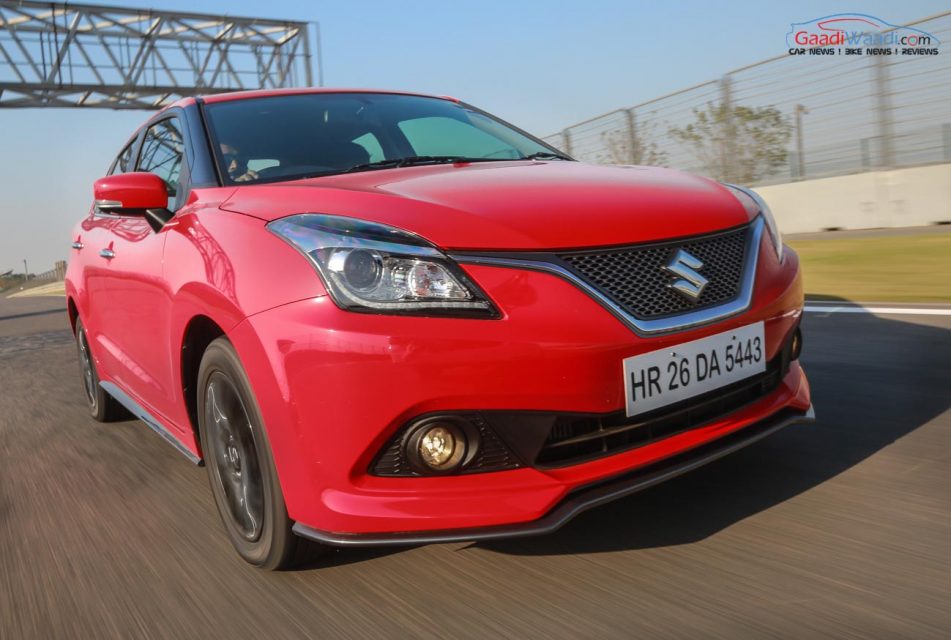 The turbo lag was nowhere to be seen throughout rev band and we managed to hit its electronically-limited top speed of 170 kmph in the over a kilometre long stretch. It can be driven at above 150 kmph without hassle and smoothly unlike the regular Baleno. One of the strongest points the Boosterjet engine brings to the table is high fuel economy besides the performance. Claimed at 21.1 kmpl, it is a big reason why you would not need to pull up on petrol stations regularly while having some fun behind the wheel of Baleno RS – justifying sporty car stance in family hatchback attire.

Based on the same platform as the Baleno, the RS is 60 kilos heavier than its standard sibling. Courtesy of the extra weight, it has become more stiffer and improved the overall handling and stability in high speeds. It is also the reason why the steering has become more responsive and feels sportier in on-the-limit corners. The main aspect that has seen the most improvement is stability over the standard model due to the more stiffened front suspension. At the BIC’s parabola curve, I wrongly calculated the exit speed and had to vigorously adjust the steering but it remained confident on the track surface. 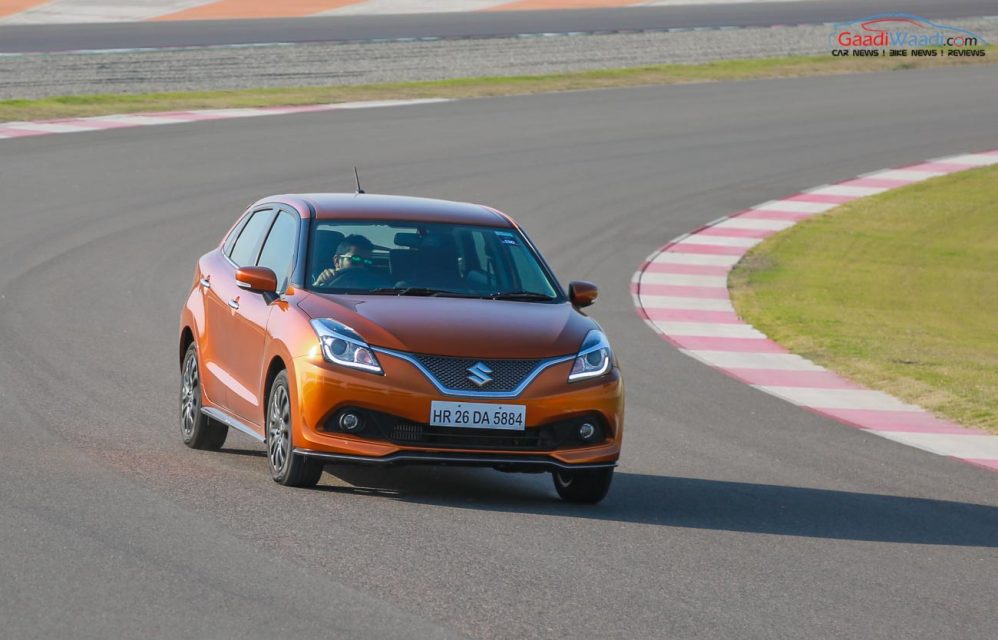 An above 100 PS hatchback without rear disc and ABS with EBD is an unsafe affair. Maruti knows adding more power is not enough for a performance-oriented buyer and thus included disc brakes on rear wheels as well. It allows you to push the RS with confidence and the braking stability has considerably improved too. The Baleno RS was tested at Rohtak R&D centre and complies with side impact, frontal offset impact and pedestrian standards. 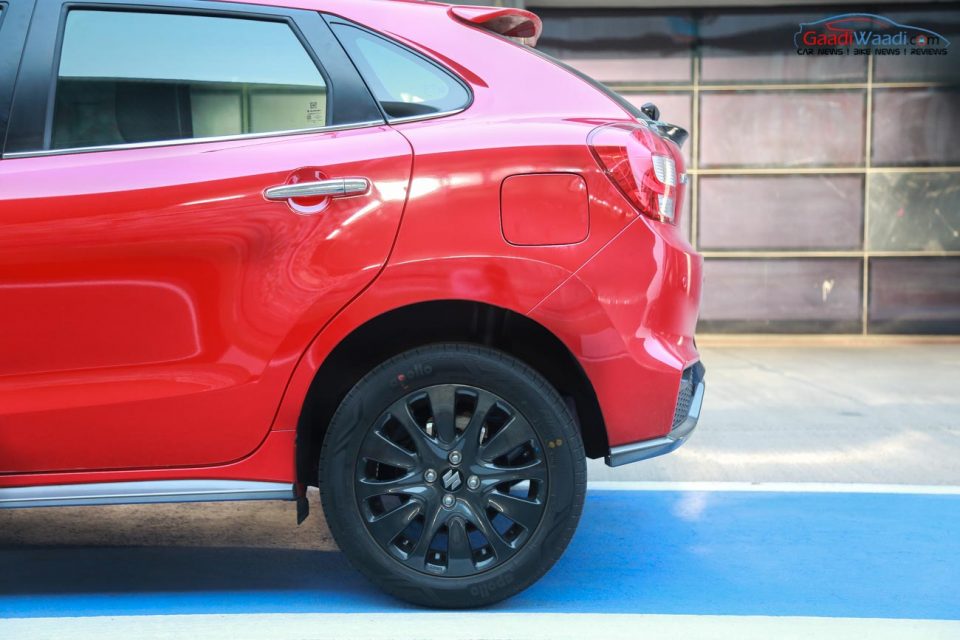 It comprises of ISOFIX child seat restraint anchorages, and has extensive use of high tensile steel in construction according to the automaker. The other safety features included in the RS are dual airbags, seat belts with pretensioners and force limiters, anti-theft security, headlamp auto levelling, driver side pinch guard power window and seat belt reminder, and child seat tether anchorages among several others. 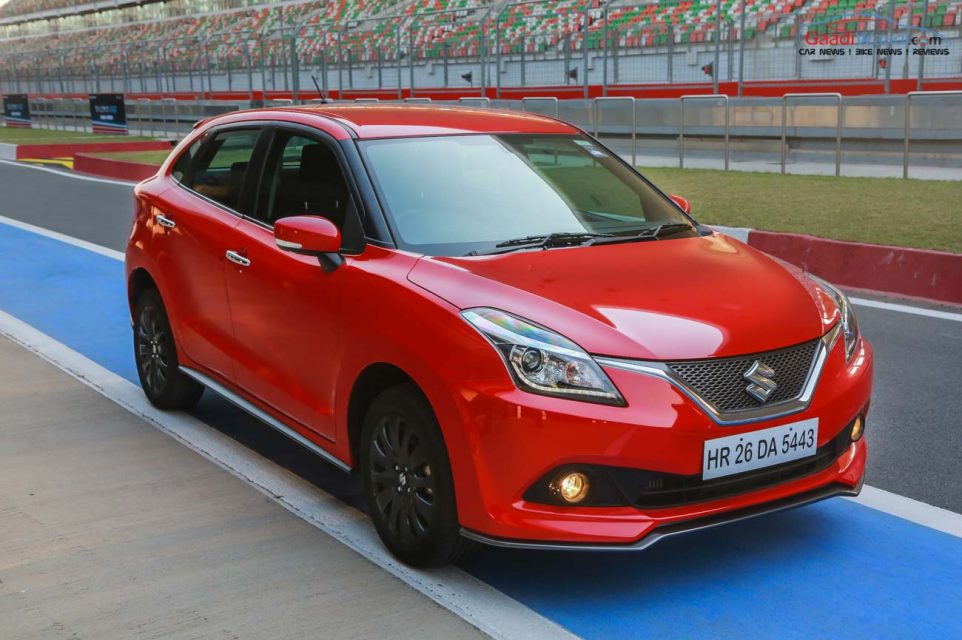 Let us categorically put this into a conclusion so that you can have a clear head when making subjective decisions. As for the styling, there is a vast room for improvement but evaluating the RS’ exterior is fairly an easy job as you have certain touches that make it sportier. For instance, the aggressive bumpers, black wheels, blackened pillars and satin black finish do elevate its appeal over the standard model but only by a moderate margin.

Plainly speaking, the interiors are just as same as the standard Baleno except for some subtly added ingredients like the RS badge on footmats. Performance is the key contributor to the existence of RS and in any phase, we would choose the Boosterjet over the K-Series petrol motor due to its punchy feedback and constant pursuit of speed throughout the rev range. The added weight does come handy in improving the overall stability while rear discs aid in additional stopping power. 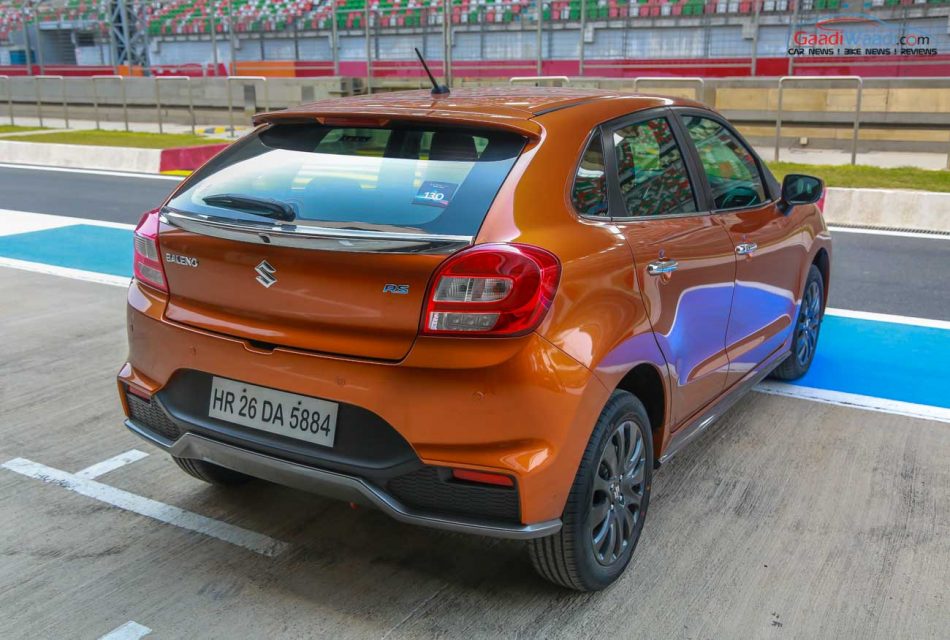 But all these inclusions come at a cost. Rupees 1.4 lakhs to be precise as the single-variant of RS offered in Alpha trim is that much costlier than the regular 1.2L Baleno. The massive hike is certainly due to the import costs bore upon the 1.0L Boosterjet engine shipped from Japan. We would have been really pleased if the Baleno RS is priced Rs. 20,000-30,000 cheaper though but performance versions do come with a premium and the RS has 21.1 kmpl mileage to back it up.