The all-new Swift quite sporty and appealing when compared to the second-generation, now-discontinued Swift. With a few modifications, the all-new Swift can be transformed into a much better-looking car. Here is an example of the same. The Swift seen here is fresh out of the showroom and gets a range of customisations. To start with, the headlamps have been given an all-black treatment. The smoked headlamps go quite well with the overall look of the vehicle, which majorly uses the black coloured inserts.

The car also gets aftermarket blacked-out alloy wheels. At the rear, the tail lamps have been given the smoked effect that further adds the sporty feel to the hatchback. It also gets two LED auxiliary stripes mounted on the lower bumper that gives it extra visibility night and also makes the Swift visually appealing. 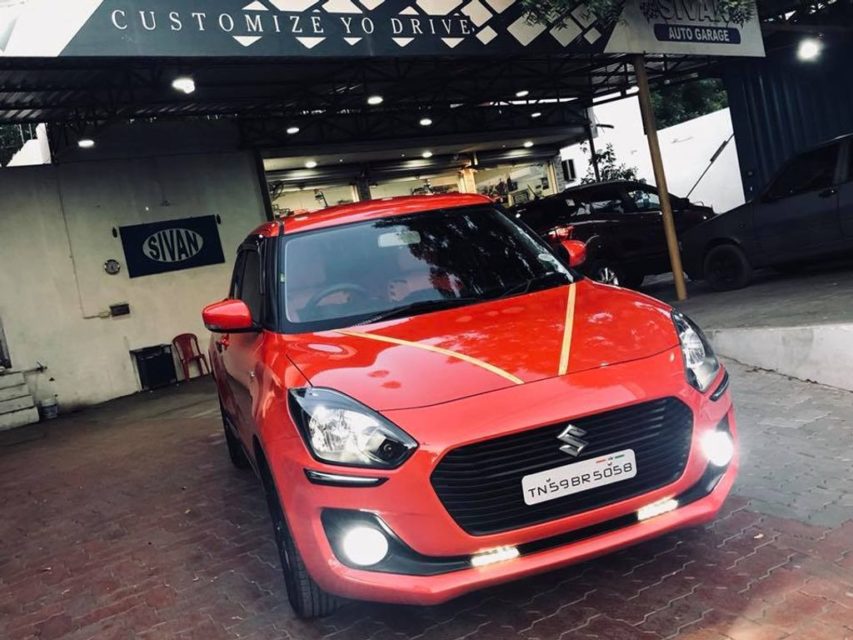 The Swift RS has rumoured to be launched in India for a long time now. Even though there are strong chances of the vehicle officially entering the Indian market, Maruti Suzuki has not officially confirmed the same till date. This Maruti Suzuki Swift owner has modified a white coloured Swift keeping the Swift RS in mind.

The car gets a new grille that reminds the masses of the Swift RS. All the chrome has been removed for the vehicle and it gets an all-black badge and other inserts. The owner has also lowered the vehicle by a few millimetres that give the aggressive stance to the vehicle with the bigger, aftermarket all black alloy wheels and low-profile tyres. 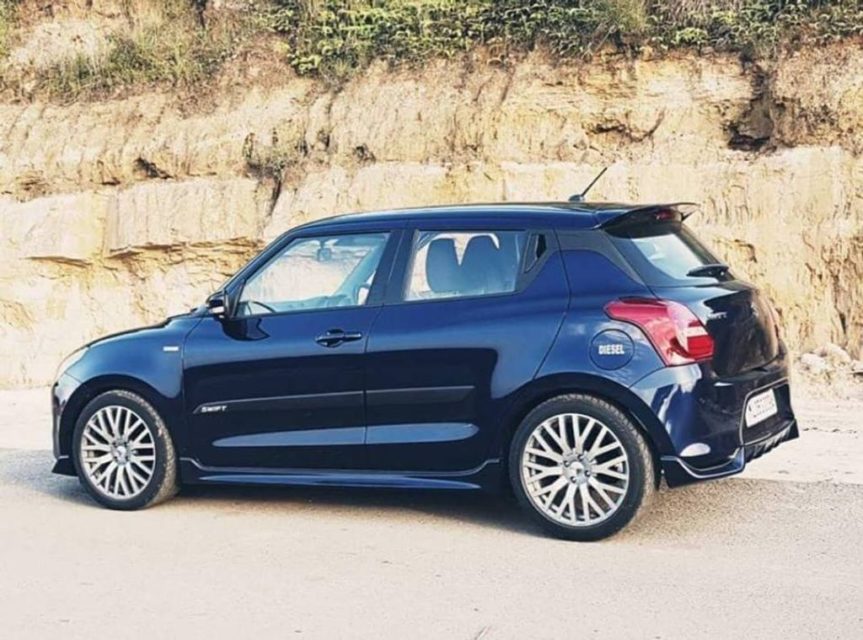 The lowered cars are not very suitable for the Indian roads because of their condition. However, there is no doubt that the lowered cars look extremely good, especially because of their aggressive, close-to-the-ground stance. This particular example of the Maruti Swift is the first-ever lowered version of the all-new Swift. With the help of lowering springs, the Swift loses about 30mm of ground clearance.

The stock ground clearance of the Maruti Swift if 170mm and after lowering the car, it becomes around 140mm. While it sounds quite low, careful driving can ensure that the underbody remains untouched. The Swift, however, looks extremely good with the lowering springs. Everything else in the vehicle remains stock except the alloy wheels that have been updated with new 17-inch ones with 215/45 spec tyres. 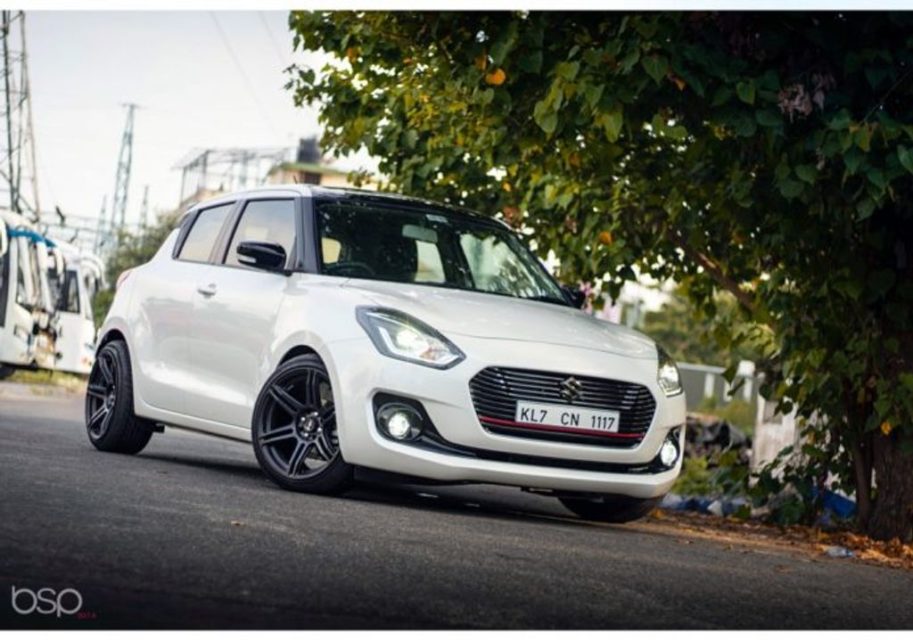 The all-new Swift is quite an attention-grabbing vehicle even in its stock form. But there are owners who love head turning towards them when the vehicle passes them. Here is a Maruti Suzuki Swift that gets loud customisation. The red coloured hatchback gets thick white inserts. It gets thick white inserts under the body, around the front grille and even in the fog lamp housings. At the rear, the white inserts continue to surface as the underbody plastic skid plate, tailgate belt line and the roof-mounted spoiler. 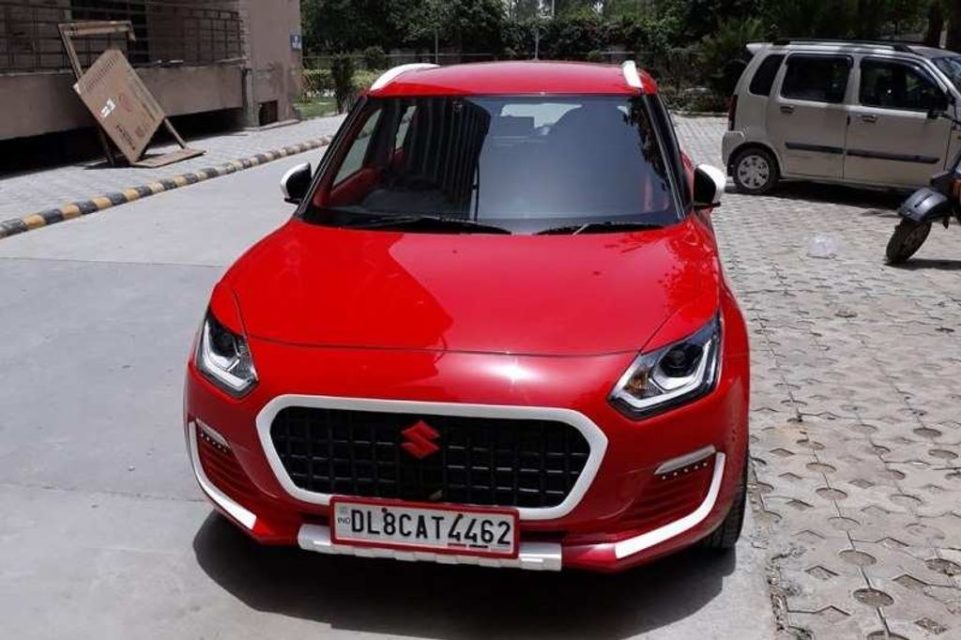 Putting a wrap on any car changes the way it looks. Wraps are extremely good on any vehicle and they are completely legal too. Here is a Maruti Swift that gets military customisation wrap on the body. The matte green olive colour is banned for use by any civilian as they are exclusively used by the army men in India. However, getting your vehicle wrapped in the same colour is not banned. There are many thousand kinds of wraps available in the market that can instantly transform the way a vehicle looks.