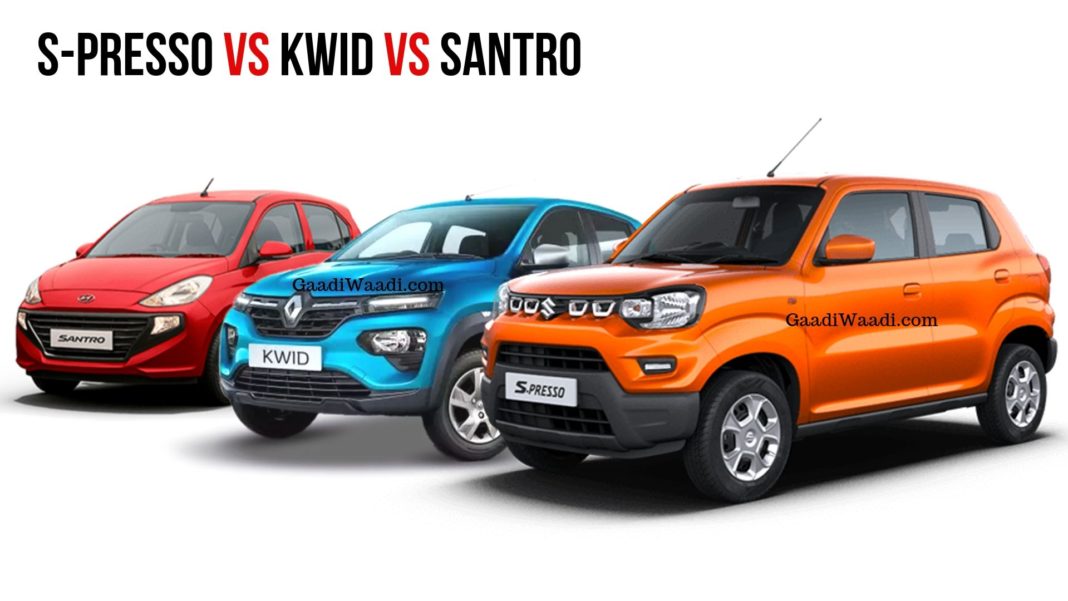 The Maruti S-Presso and the Renault Kwid now poses as a worthy competitor in the mini-hatchback segment. But how will it fare against Hyundai’s tallboy Santro? The answer is here…

The mini-hatchback segment stands as one of the most sought-after segment in India. Since the launch of the Hyundai Santro last year, the same segment was quiet for about a year up until Maruti Suzuki launched the S-Presso and Renault gave the Kwid a facelift. This livened up the segment which has otherwise been facing a slump due to the remarkable decline in sales in the industry.

Undercutting the popular Alto K10 by Rs 3,000 for entry-level (S-Presso STD vs K10 LX), Maruti Suzuki launched the S-Presso earlier this week with more features and on new K-Platform platform. On the other hand, While most of the changes in the Kwid came in terms of cosmetics, the car did benefit from a couple of changes on the inside such as a new infotainment system as well.

As the Hyundai Santro, the Maruti Suzuki S-Presso and the Renault Kwid place each other in their crosshairs, we put them up against each other to see how they fare on paper.

Dubbed as a mini-SUV, the Maruti Suzuki S-Presso stands out with an upright A-pillar and more ground clearance as characterised by all SUVs. The front fascia of the car shares plenty of similarities with the Vitara Brezza such as the sleek, chrome-laden grille and square-ish headlamps. The company has given body cladding on the running board along with squarish wheel arches to add some SUV-ish characteristics. 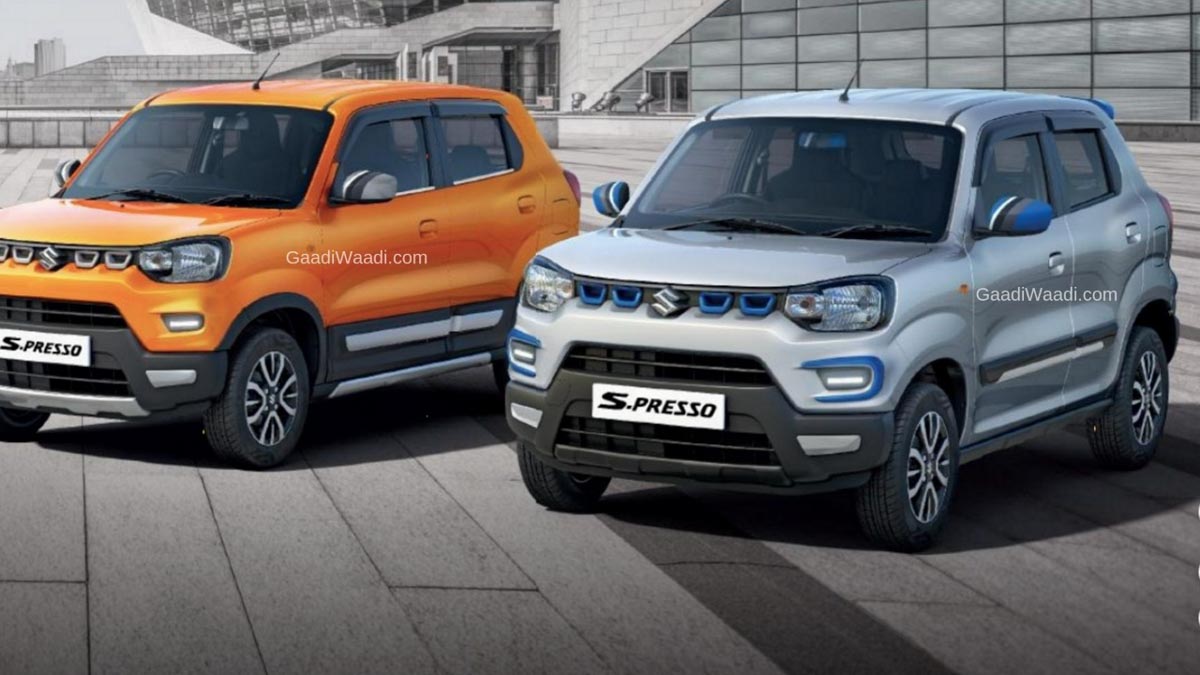 Renault has hit it out of the park in terms of look on the new Kwid. For the new model year, the car comes with a similar design that was earlier seen on its electric sibling launched in China.

It features high-set LED DRLs, a new radiator grille, two-tier headlamps and a sportier lower-grille. While the overall design remains the same, the side profile is now more pronounced with new wheels. At the back, the tail lamps have been tweaked with supplementary reflectors. 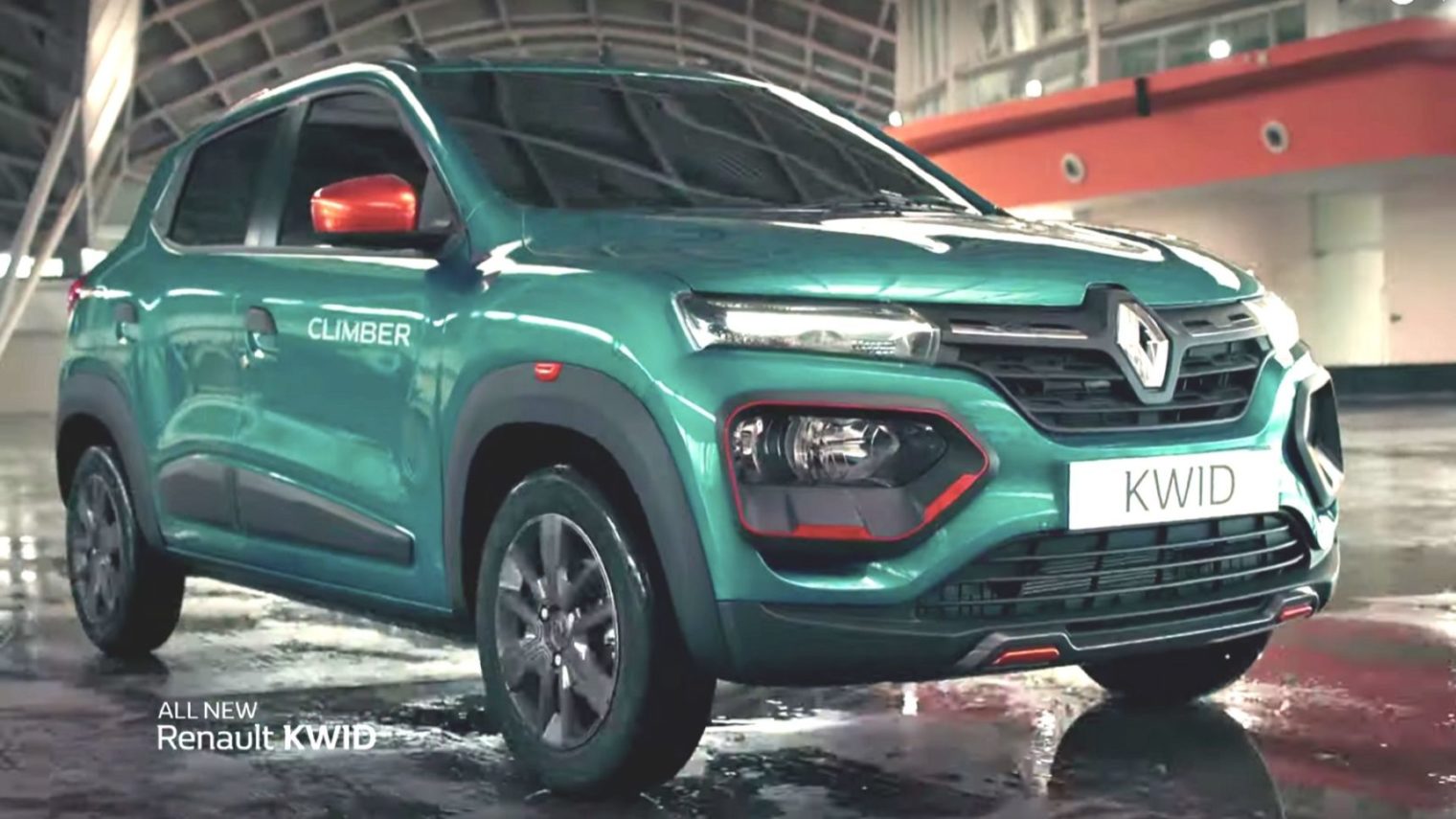 on the other hand, the previous-generation Hyundai Santro did a remarkable job in grounding a solid image for the company. The comeback comes with nothing less of a perfectly apt hatchback. The wide face is accentuated by the company’s signature grille.

The headlamps along with the logo have been pushed up like the fog lights. Its side profile is highlighted by the creasing that runs along with the car. While the car cannot exactly be called a ‘tall boy’ which it was marketed as, the new Santro has definitely become a ‘wide boy’. 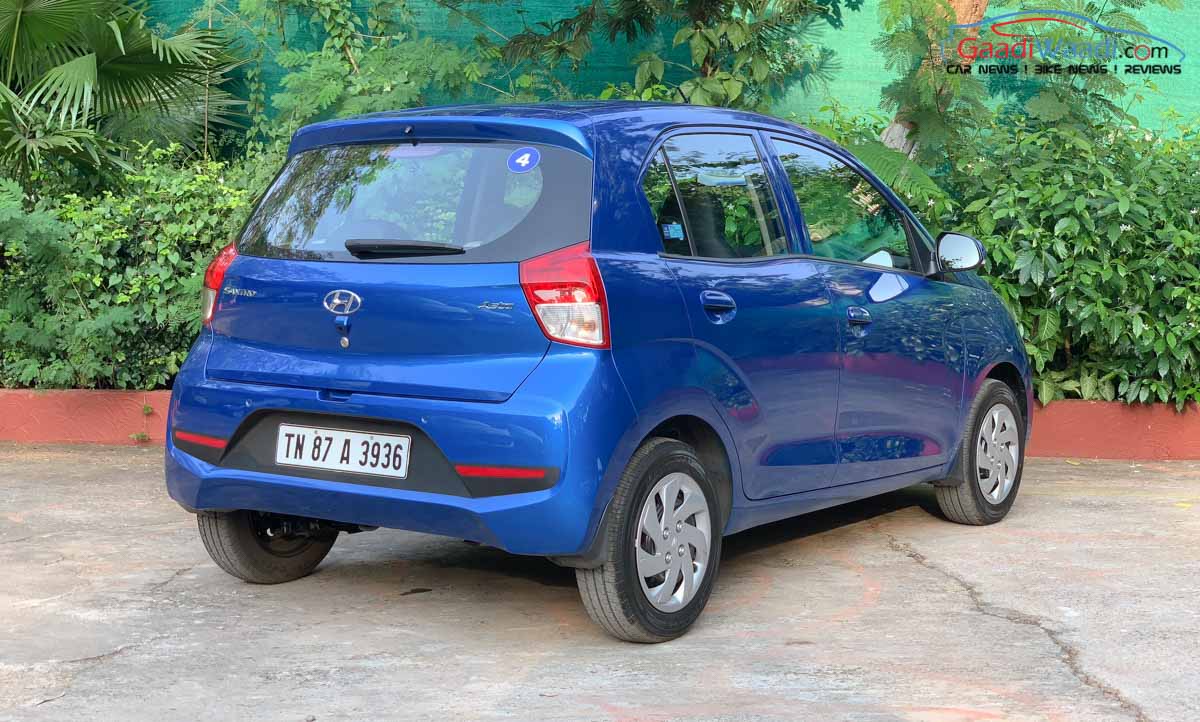 Maruti S-Presso’s cabin has been trimmed out in black with orange inserts on the dashboard and side AC vents inspired from Future-S Concept. Unlike the Alto K10, the S-Presso gets power windows at the rear and a centrally mounted instrument cluster, touchscreen system with Maruti Smart Play studio, dual front airbags, USB and 12-volt switch, steering mounted controls. Unlike the outgoing model, the new Kwid gets a larger 8.0-inch touchscreen infotainment system featuring Android Auto and Apple CarPlay that it shares with the Tribler MPV. The instrument cluster too is derived from the Triber with a digital cluster that includes a tachometer. 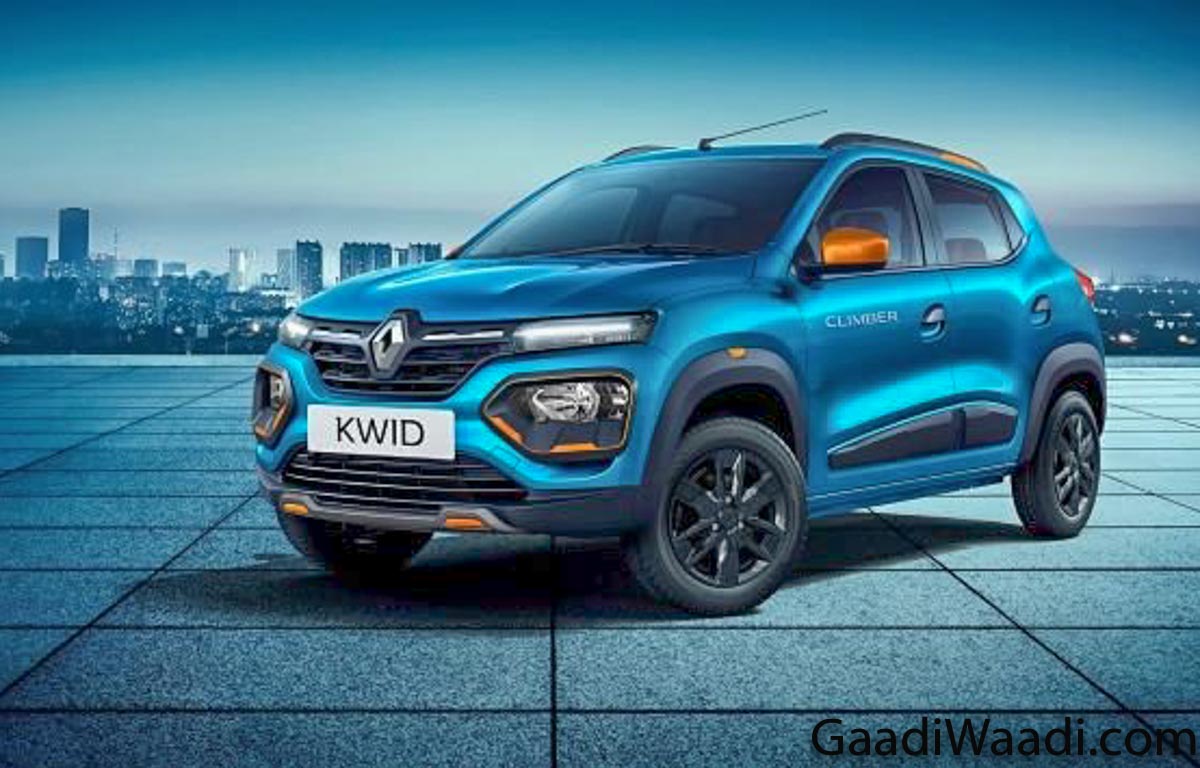 Hyundai upped the ante in the latest generation of Santro with better quality interiors. The rubberised button below and the touch and feel of elements in the cabin all add up to give a premium feel to the car that feels a segment above.

The highlight of the car, however, is the 7-inch touch screen infotainment system that comes with Apple CarPlay, Android Auto and Mirror-link smartphone connectivity.

The S-Presso is powered by Maruti Suzuki’s K10 engine that delivers 67bhp and 90Nm of torque. The engine can either be availed in a 5-speed manual transmission or an AMT same as Alto K10. It delivers a good fuel-efficiency of 21.7 km/l. Also, CNG variant to join the lineup soon. 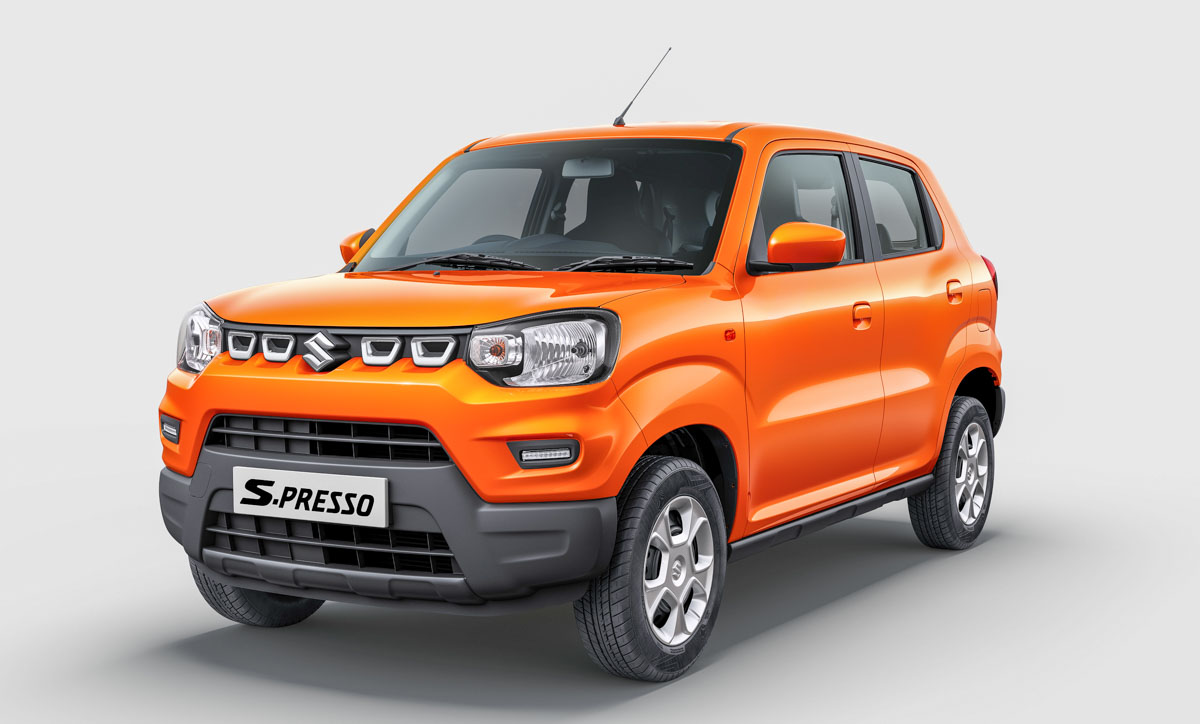 The new Kwid retains the same engine options as the outgoing version. On offer are two options that include an 800-cc unit that produces 53bhp and 72 Nm of torque through a 5-speed manual transmission and a 1.0-litre block that churns out 67bhp and 91Nm of torque, with an option of either a 5-speed manual transmission or an AMT. It delivers a good mileage of 23 kmpl with 1.0L and over 25 km/l with 800cc engine.

Hyundai Santro, on the other hand, is powered by a 1.1 litre, 4-cylinder engine that produces 68bhp and 99Nm of torque. Transmission on offer includes a 5-speed manual transmission and an AMT and it delivers lowest fuel efficiency amongst these 3 at 20 km/l. In terms of pricing, the new Kwid takes away the cake with prices starting as low as Rs 2.83 lakh (ex-showroom) for the standard variant with the 800-cc engine. The top-spec variant available with the 1.0-litre unit is priced at Rs 4.84 lakh (ex-showroom).

Appearances are subjective among these three models but the S-Presso and facelifted Kwid will grab more attention than the Santro. The S-Presso gets BSVI engine right from the get-go and it explains why it is more expensive compared to the Renault Kwid. However, the BSIV Santro is still costlier than the S-Presso and it could be a deal-breaker for some customers particularly in this price-sensitive segment.

The new Kwid and S-Presso are more practical with higher ground clearance while features like touchscreen infotainment system put the ball in their court without a shadow of a doubt compared to Santro. Between S-Presso and Kwid, it is a tough fight in terms of the equipment package but the proven Maruti Suzuki engine and its efficiency characteristics will make it the better option.