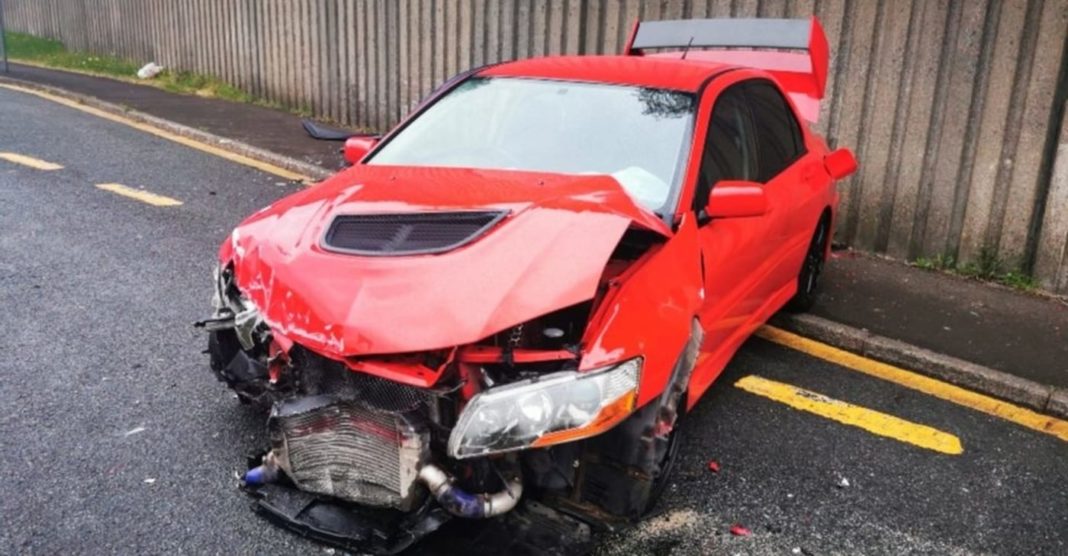 In a recent incident, a man in the UK crashed a 2006 Mitsubishi Lancer Evolution IX (FQ-320), less than 48 hours after winning it in a draw

27-year-old Adam Griffiths was a lucky man, having won a lovely Mitsubishi Lancer Evo IX and £1,000 on 26 April 2021, thanks to Dream Car Giveaways. He went over to collect his prize the next day, but sadly, the celebrations didn’t last long. Less than a day after collecting the keys to his Evo, on 28 April, Griffiths was involved in a brutal crash, which left the vehicle wrecked beyond repair.

The crash happened on Cardiff Road in Pontypridd, Wales. According to South Wales Police, there were two occupants in the vehicle, the driver and a passenger, both of whom escaped with only minor injuries. The car was heavily damaged though, and Dream Car Giveaways later confirmed on social media that the vehicle had been written off.

“As most of you will be aware, the Evo was written off in an incident this morning. The main thing is Adam is fine, we don’t know what happened, and we won’t speculate,” Dream Car Giveaways confirmed the incident on their Facebook Page. After the incident went viral online, Griffith reportedly faced harassment online for the crash, and had to take down his Facebook page.

The images of the crash reveal that the front and rear end of the vehicle suffered horrible damage. The intercooler is destroyed, the hood and tailgate have bent upwards, and many suspension and engine components were speculated to be broken as well. Thankfully, no other car or person was involved in the accident.

The Mitsubishi Lancer Evo IX in question was a 2006 model, with 70,000 miles on the clock and a complete record of service history. It is one of the best performance cars to come out of Japan, and the Lancer Evo series was particularly popular among rally drivers due to its brilliant performance and handling.

Dream Car Giveaways is a famous UK based company that sets up lucky draws, allowing people to win their dream car for a fraction of its cost. The company offers performance cars from brands like BMW, Porsche, Audi, etc.